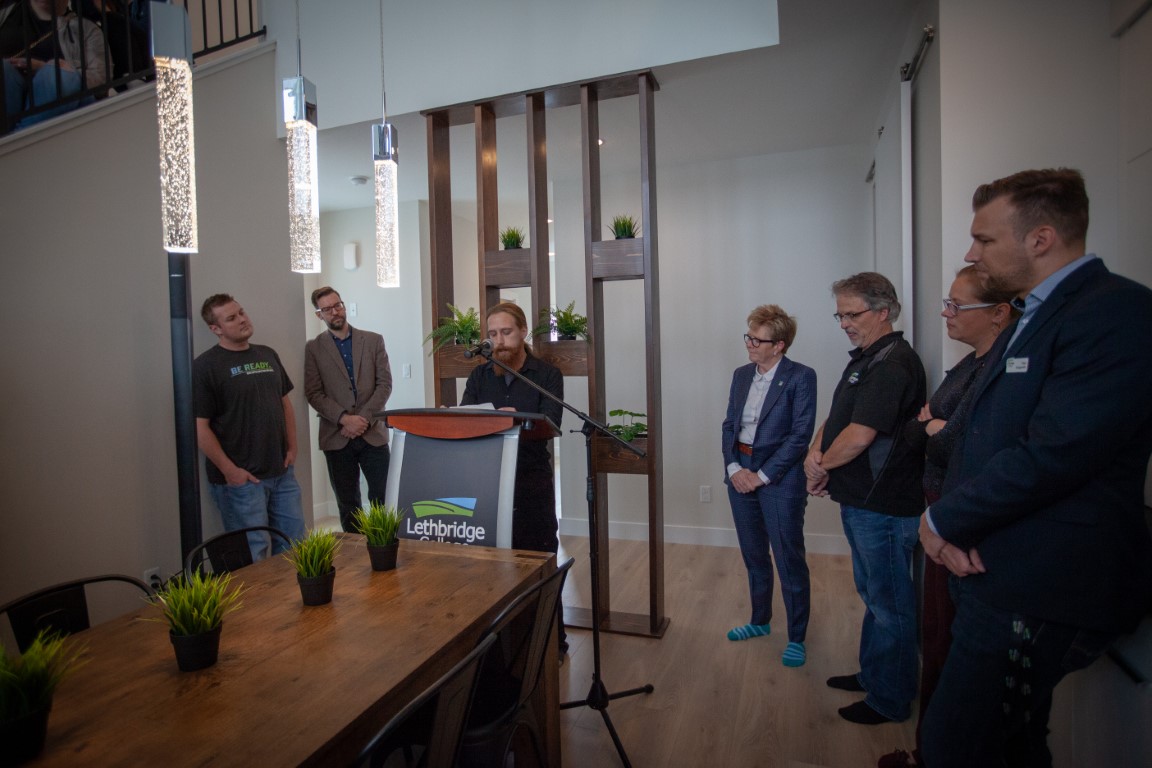 The winner of the inaugural Ashcroft: Giving Back scholarship contest, presented by Lethbridge College, was announced on Wednesday afternoon. Tyler Dow will have up to $10,000 of his education paid for. In January, he will begin working towards a Digital Communications and Media diploma.

The Ashcroft: Giving Back scholarship contest is the latest phase of a multi-faceted partnership between Ashcroft Master Builder and the college. The contest was open to anyone, with a focus on giving the gift of education to someone who would otherwise not be able to pursue it.

“Winning the Ashcroft contest is the opportunity I need to restart my life and start realizing my dreams,” says Dow. He dropped out of high school at 16 after spending his childhood constantly moving around. He says a battle with depression caused him to quit school and enter the workforce at a young age.

“Before I entered the contest I knew that I needed to make a drastic and positive change, as the life I was living was not going to get me anywhere,” he continues. “I knew I had the ambition to go far if I just applied myself. I have had the dream of being a photojournalist for many years, and I knew if I had the opportunity to right the many wrongs of my life, I could realize that dream and reach my fullest potential.”

Awarding the scholarship completes a full cycle of the partnership between Ashcroft and Lethbridge College. Last January, the Ashcroft Design Challenge gave Interior Design Technology students the chance to design a home that would be built by Ashcroft. Students Lina Wiebe and Jada Kot created the winning design, The Emberly, and Wiebe and Kot were offered the opportunity to work as paid interns at Ashcroft over the summer.

The Emberly was built over the summer in Garry Station, and proceeds from the sale of the home now go towards the Ashcroft: Giving Back scholarship contest, which was won by Dow.

“We wanted to give back in a way that actually changes lives,” says Rodrigo Esparza, Ashcroft Master Builder general manager and partner. “Tyler was the exact sort of person that we wanted to help. He has drive, ambition and talent, but had barriers in the way of pursuing his education. We hope we have removed those barriers, and we are so excited to see where he goes from here.”

The announcement of the scholarship winner took place on Wednesday morning inside the newly completed Emberly home. The creation of the scholarship required contributions from the suppliers and tradespeople involved in the home’s construction, along with Ashcroft.

“It is incredible when industry takes the lead and decides to make a difference in the educational lives of our students,” says Dr. Paula Burns, Lethbridge College President and CEO. “This is a truly unique partnership with Ashcroft that puts students first and shows what can be achieved when we all think outside of the box.”

Dow hopes his Lethbridge College experience will lead to a career as a combat photojournalist.

“There are a great deal of incredible stories that go untold, and a great many lives that are destroyed by the horrors of combat,” says Dow. “As a photojournalist I can capture those stories and present them in a way that truly shows the world who these people are and the lives that they live. While the work is dangerous, I have no problem with risking my life to capture the lives of the people who have absolutely no choice but to deal with these dangers on a day-to-day basis.”

Ashcroft Master Builder Ltd. is an award-winning home builder based in Lethbridge. It was one of the first builders to take part in The College Home project with Lethbridge College and the Building Industry Land Development (formerly Canadian Home Builders’ Association) – Lethbridge Region. The company has a history of philanthropic efforts in the southern Alberta community, including its yearly Christmas campaign.

This is the first year of a partnership between Ashcroft and Lethbridge College that includes both the Ashcroft Design Challenge and the Ashcroft: Giving Back scholarship contest. Plans are already in place for the partnership to continue into its second year and beyond.