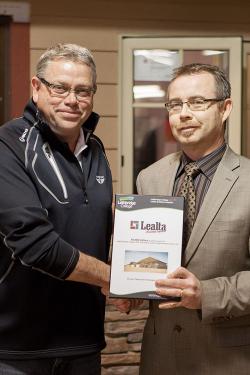 Lethbridge College announced a $50,000 gift today from Lealta Building Supplies of Lethbridge. The gift will support the college’s Trades and Technology Renewal and Innovation Project (TTRIP) through the establishment of the Lealta Building Supplies Orientation and Information Display, which will be created in the south entrance of the new trades and technology facility.

This gift will also support student awards through the creation of the Lealta Building Supplies 50th Anniversary Carpentry Apprenticeship Award, which will provide $1,000 each year to a carpentry apprentice with outstanding performance in year two of his or her apprenticeship.

“This gift will provide significant support to individual carpentry apprentices as well as our whole trades program,” says Dennis Sheppard, the college’s dean of the Centre for Applied Management. “The thriving partnership between the college and an industry leader like Lealta Building Supplies provides long-term benefits to students, to the college, to industry and to the greater community. It’s another example of the community’s commitment to our mission of inspiring and facilitating learning and innovation to meet economic and social needs.”

Lealta Building Supplies was founded in 1960 by Eugene Modrzejewski. In its early years, the company’s main focus was on finishing materials such as plywood and hardwoods. In 1999 Lealta moved to a new location and expanded the kinds of materials it supplied. With this expansion, the company started to offer a wider array of products to its customers. In 2012, industry leader Dave Jackson became sole owner of Lealta Building Supplies, bringing with him his dedication to and knowledge of the home building industry.

“At Lealta Building Supplies, we feel a strong connection to our community,” says Jackson. “We believe in supporting locally owned businesses and organizations and work in conjunction with other local businesses, helping to make our city better today, tomorrow and into the future. ‘Building Together’ is our motto and represents the sense of value that we carry into the community.”

Jackson adds that the gift is a way to recognize Lealta’s employees and the more than 50 years the company has been in business. He says he also hopes this gift can motivate others in the industry and the community to support the college’s trades and technology project, as “it’s important for industry partners to become involved.”

Past gifts from Lealta to Lethbridge College include support directed to Kodiaks Athletics and to the college’s annual golf tournament. In addition, Lealta is participating in The College Home: Building Futures Together project, a unique collaboration launched earlier this year between the Canadian Home Builders’ Association Lethbridge Region (CHBA) and the college. During the next five years, CHBA builder members will partner with their suppliers and tradespeople to build two homes per year and have the proceeds from the sales of each go towards the Trades and Technology Renewal and Innovation Project at Lethbridge College.