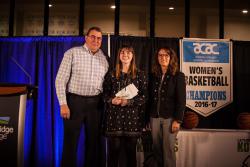 Two basketball stars were slam dunk choices as the Lethbridge College Kodiaks presented their annual athletic awards in a high-energy ceremony on Monday night in the Val Matteotti Gymnasium.

Sunder West from the women’s basketball team and Chris Maughan from the men’s basketball team were named the winners of the Tim Tollestrup Leadership/Athlete of the Year awards. Named after long-time Lethbridge College athletic director Tim Tollestrup, the awards honour the student-athletes who best combined the three pillars of Kodiaks athletics: academic accountability, athletic excellence and the student-athlete experience.

West (third year, Raymond, Alta.), had a tremendous regular season for the conference-champion Kodiaks, earning an ACAC south division first team all-conference selection and finishing fourth in ACAC scoring, averaging 17.5 points per game. But she really elevated her play in the playoffs, winning MVP honours in both the ACAC and CCAA championship tournaments as the Kodiaks went undefeated and won the fourth national championship in the college’s history. A General Studies student and CCAA Academic All-Canadian, West is also actively involved in a large number of Kodiaks community events. 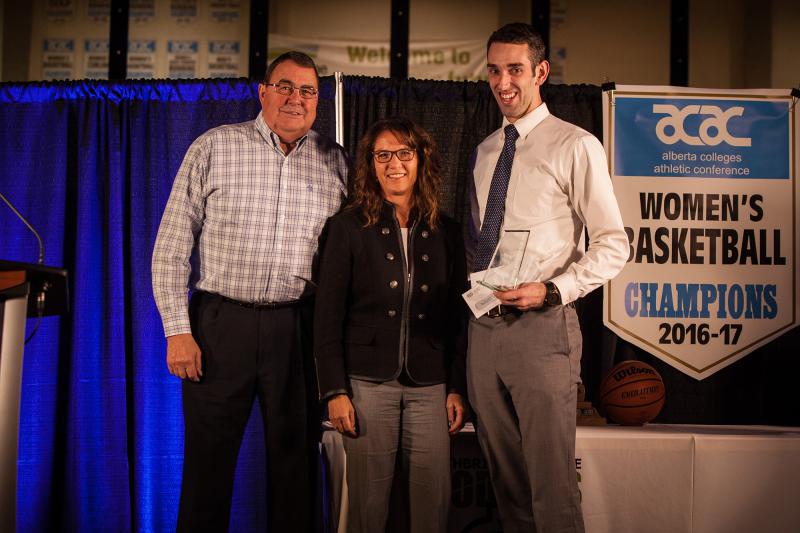 Maughan (fourth year, Mesa, Ariz.), returned to the Kodiaks this season, following one year at the University of Lethbridge. He had a tremendous season in his return to the college, leading the Kodiaks in scoring (15.4 points per game), shooting percentage (55 per cent), rebounding (7.9 rebounds per game) and blocks (29). He was an ACAC south division first team all-conference selection and an ACAC championship all-tournament team selection. A student in Business Administration – Management, Maughan was a CCAA academic all-Canadian and was an active member of the Kodiaks community, including taking a lead role in the Warm Paws campaign.

The KODI awards celebrated all aspects of another very successful Kodiaks season, which saw the program earn more than 45 conference or national athletic and academic honours.

“It was another successful season for the Kodiaks as every sport was in a position to step onto the pitch, track or court and compete to win,” says Todd Caughlin, manager of Kodiaks Athletics. “The culture of Kodiaks Athletics being competitive with every program is beginning to show and it is exciting to see what next year holds after the strides our programs took this year.”

The Kodiaks also introduced a new student award, named after Emmalee Cherweniuk. Named newcomer of the year by the women’s volleyball team, the 18-year-old Cherweniuk was killed in a car crash in March. The $500 award, sponsored by the Kodiak Athletics Association, will be named after Emmalee and will be awarded to a Kodiaks women’s volleyball player in her honour for at least the next three years.

KODI award winners are listed below: