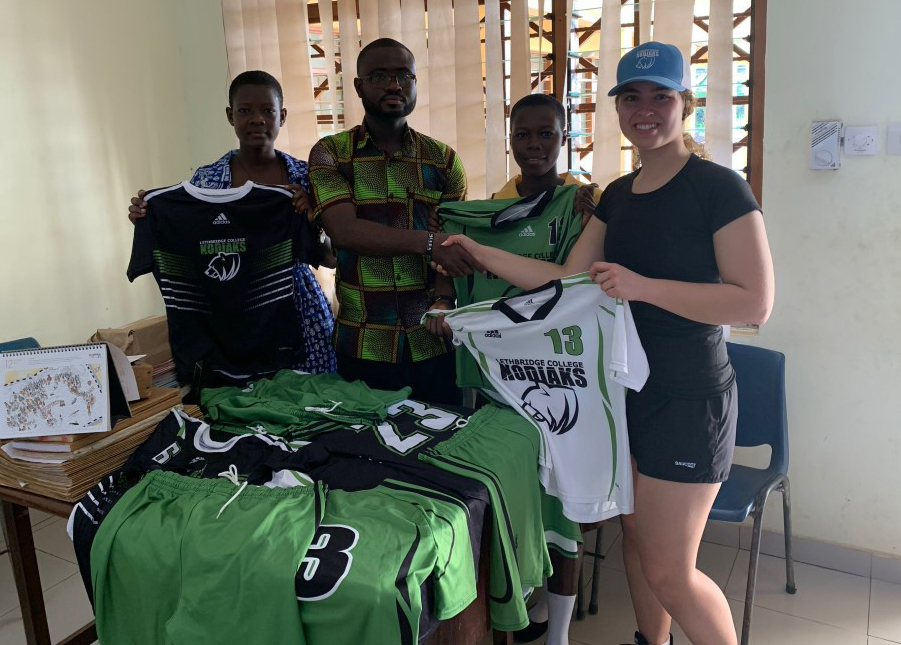 The special efforts of a Lethbridge College Kodiaks soccer alumna mean the Kodiaks logo is now being proudly represented more than 11,000 kilometres away. Jill Brown (Nursing, 2020) personally delivered two complete Kodiaks soccer jersey kits to the Prisons Training School in Ghana earlier this year, during a trip to the Ghanaian capital of Accra.

The donation started with Kodiaks soccer head coach Sean Carey, who began thinking of an impactful way to donate the set of uniforms retired by the team in 2016. Carey immediately thought of Brown, who played for the Kodiaks as a goalkeeper in 2017, knowing the avid world traveller would find a suitable home for the jerseys.

“Jill and I were talking about her career plans when she mentioned she was going to Africa to expand her nursing experience and help people that don’t necessarily have the same health care we have,” says Carey. “That’s when we started discussing the possibility of taking the jerseys there and giving them to a school that would be able to use them like we had.”

The donation is significant for the Prisons Training School, which relies on sponsorship to provide equipment and transportation for its athletics program. The donated uniforms are manufactured by Adidas and were worn by the team from 2013-16 before being retired by the club after the Kodiaks swapped their primary colour from green to light blue for the 2017 season.

“It’s so exciting that we were able to donate our jerseys to a school that relies on donations,” says Carey. “Hopefully in the future we’ll be able to do it again.” 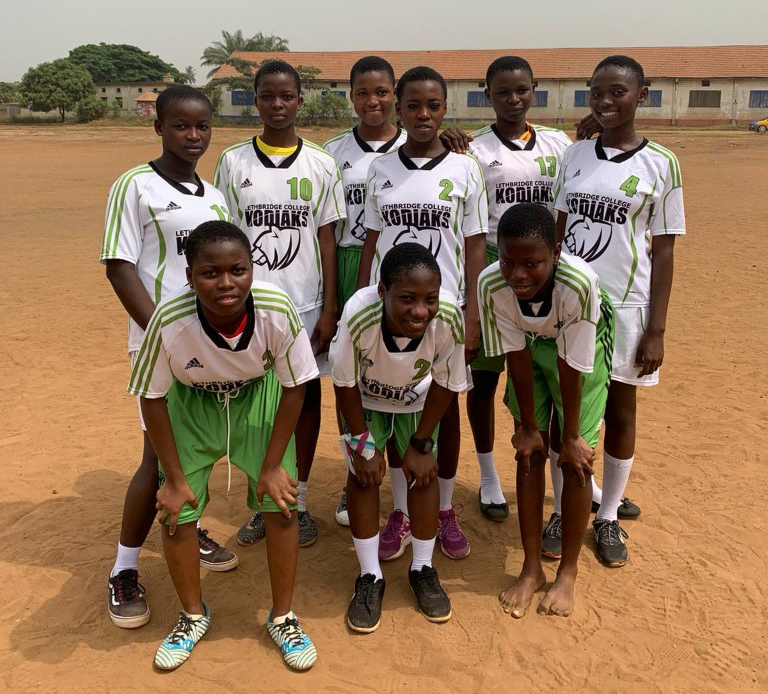 Ghana isn’t a typical Christmas vacation spot for most students, but for Brown it was the perfect opportunity to connect with a friend and become immersed in a different culture.

“It may seem like a strange destination to vacation at, but I was fortunate enough to be brought there by my friend Ernest who is from Accra and had just finished his degree,” explains Brown.

“Ernest and his family taught me all about Ghana and their way of life. It’s a beautiful country with quite a bit of wealth and new development. It is very similar to Canada in regards to structural development. One of the bigger issues in Ghana, however, is the wealth gap. There is almost no middle class, so you have those who are quite wealthy or those really struggling to get by with little in-between. My family was originally concerned for my safety due to many common misconceptions about Africa. I did stand out while there, but I felt no more concern for my safety than when I am back home.”

Donation to have a lasting impact

It was Ernest’s aunt who connected Brown to the Prisons Training School before arriving.

“[Ernest’s] Auntie Maame knew the head mistress and also was sponsoring a young student, so she was aware of the needs of the school,” says Brown. “Their existing jerseys were older and quite worn. She said new ones would definitely boost the kids’ morale.” 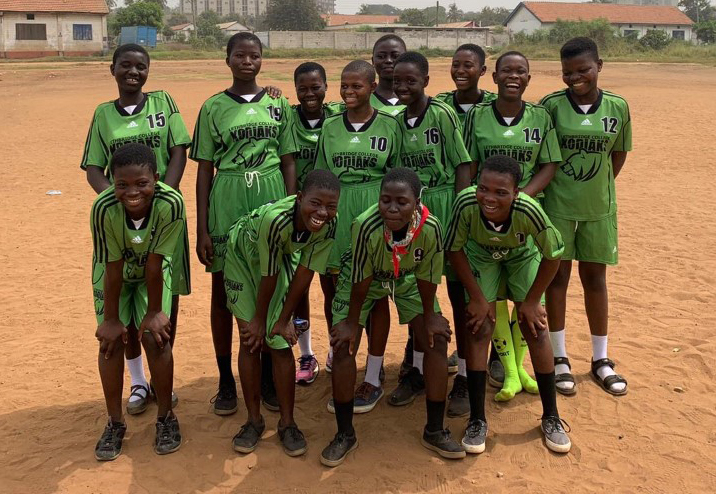 Soccer is heralded as the world’s game, and in Ghana that’s no exception – it’s by far the country’s most popular sport. However, as Brown learned firsthand, not all children are afforded the same opportunities to play and develop their skills.

New equipment for students is sparse. The school is currently without a steady sponsor, which also makes travelling for games cost prohibitive. Students typically train amongst themselves, unless other schools receive sponsorship to come to them.

Brown vividly remembers the day she dropped off the uniforms.

“I went to the school with Ernest and auntie Maame to meet with one of the teachers and a few of the children,” recalls Brown. “The kids were super excited to be getting new jerseys for their school.”

Since students were gone for Christmas break, Brown didn’t have a chance to see the jerseys in action. Ernest stayed longer, however, and was invited back for a special game where the children debuted the jerseys.

“The kids were super excited. The head mistress ended classes a couple of hours early just so they could use the new jerseys,” says Brown. “The P.E. teacher gathered them into boys and girls teams and let the matches begin.” 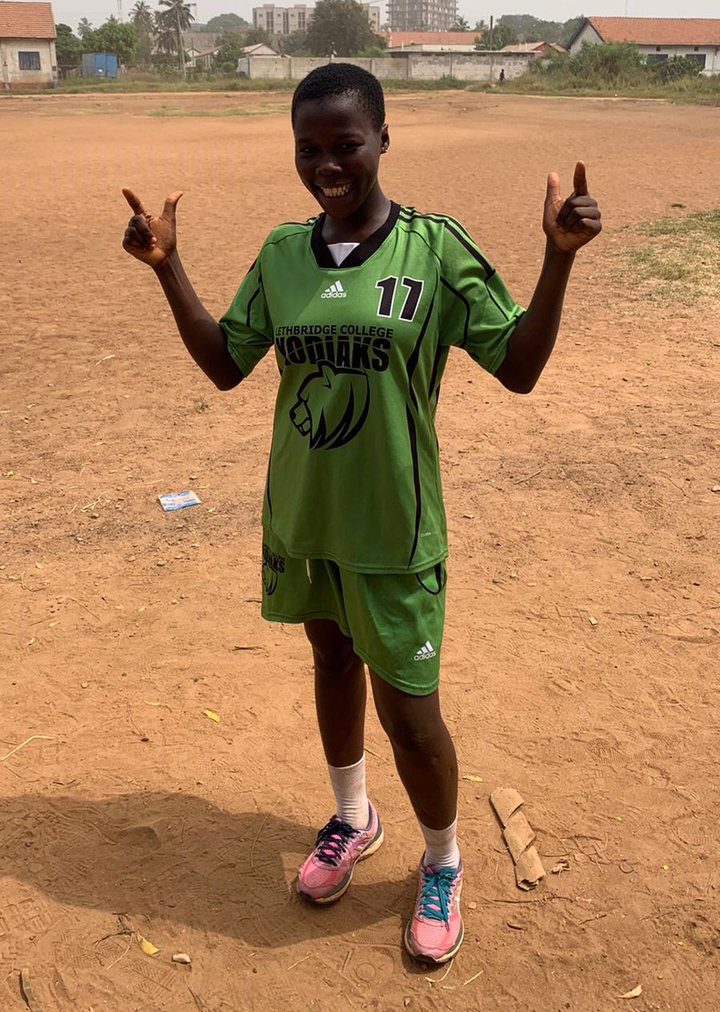 No doubt, the combination of new jerseys and early dismissal from classes created a euphoric atmosphere among the students.

The jerseys will now be used year-round in physical education classes, as well as at lunchtime and after school. If a sponsorship allows them to travel, they will also be used in games against other local schools.

For Brown, seeing the affect the donation had on the children left a lasting impression.

“I was honestly just super grateful that Sean [Carey] had approached me with the jerseys,” says Brown, who recently completed her Bachelor of Nursing degree at the University of Lethbridge. “A donation like this was substantial, as they would not have been able to afford this on their own. The teachers said the jerseys would go a long way in helping their athletic program and hopefully allowing them to save more money towards transportation. I am very thankful the timing all worked out perfectly.”

Knowing that athletes on opposite ends of the world will be wearing the Kodiaks logo is meaningful to Brown and helps prove that soccer truly is a global game.

“As a representative of Kodiaks Athletics, it makes me feel happy that students in Accra as well as Lethbridge will now be representing the same team.”