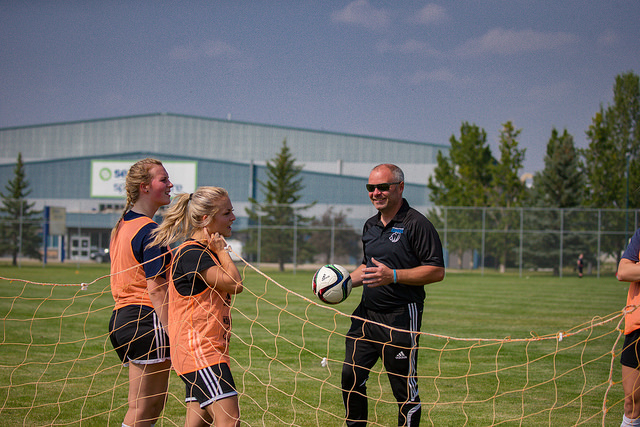 Lethbridge College Kodiaks soccer head coach Sean Carey has earned a historic honour, being named both women’s and men’s coach of the year in the Alberta Colleges Athletic Conference (ACAC) south division. Carey is the first coach to ever earn both the men’s and women’s awards in the same season.

The Kodiaks also had three men’s players and three women’s players named to ACAC all-star teams. The awards were announced on Thursday evening at the ACAC awards banquet in Calgary, hosted by SAIT.

“It’s definitely a great honour to be selected as coach of the year,” says Carey. “But these awards don’t belong to just me – they’re a testament to my coaching staff and their dedication to our program. Their hard work and time away from their families makes my job a lot easier and really makes coming to training a lot of fun.”

In his second season at the helm of both teams, Carey coached the men’s team to second place in the ACAC south division with a 7-3-2 record, while guiding the women’s squad to third place in the division with a 6-4-2 record, and a return to the playoffs for the first time in three years. Carey will go forward as the ACAC nominee for men’s coach of the year at the Canadian Colleges Athletic Association (CCAA) awards next month.

Carey previously coached the Kodiaks women’s team from 2009 to 2011, winning south division coach of the year in 2010. He becomes just the third coach in ACAC history to win both men’s and women’s coach of the year honours in their careers, joining legendary Kodiaks coach and ACAC Hall of Famer Alvin Tietz, and Jim Loughlin of Medicine Hat College.

“It’s hard to find a coach that puts in the time and effort that Sean does,” says Todd Caughlin, manager of Kodiaks Athletics. “He is truly committed to getting the most out of his student-athletes day in and day out and to do it in the right way. Earning this recognition from his fellow division coaches supports that. Sean and his staff have committed to the goals of the department and truly exemplify what every athletics manager wants in a coach. He is there for his student-athletes and the department.”

The Kodiaks had six players named to ACAC south division all-star teams. Those named on the men’s side were striker Wilson Ntignee (third year, Administrative Office Professional, Nigeria) who finished second in the ACAC with 13 goals; midfielder Ben Knight (second year, General Studies, England), who captained the Kodiaks and finished fourth in the ACAC in assists; and defender David Low (first year, General Studies, England), who was the defensive leader for the team that finished second in the division in goals against.

On the women’s side, the Kodiaks all-stars were forward Kayla Kehoe (first year, General Studies, Edmonton), who was third on the Kodiaks with four goals and was fifth in the ACAC in shots; midfielder Christine Moser (second year, Exercise Science, Whitehorse, Yukon), who had three goals; and defender Aimee Santangelo (fifth year, General Studies, Lethbridge), who helped the Kodiaks to the second best defensive record in the south division.

Both Kodiaks teams play ACAC quarterfinals on Friday against The King’s University at the ACAC Championships in Calgary, hosted by SAIT. The women’s game is at 9:30 a.m., with the men’s game at 4 p.m. A full preview is available online.