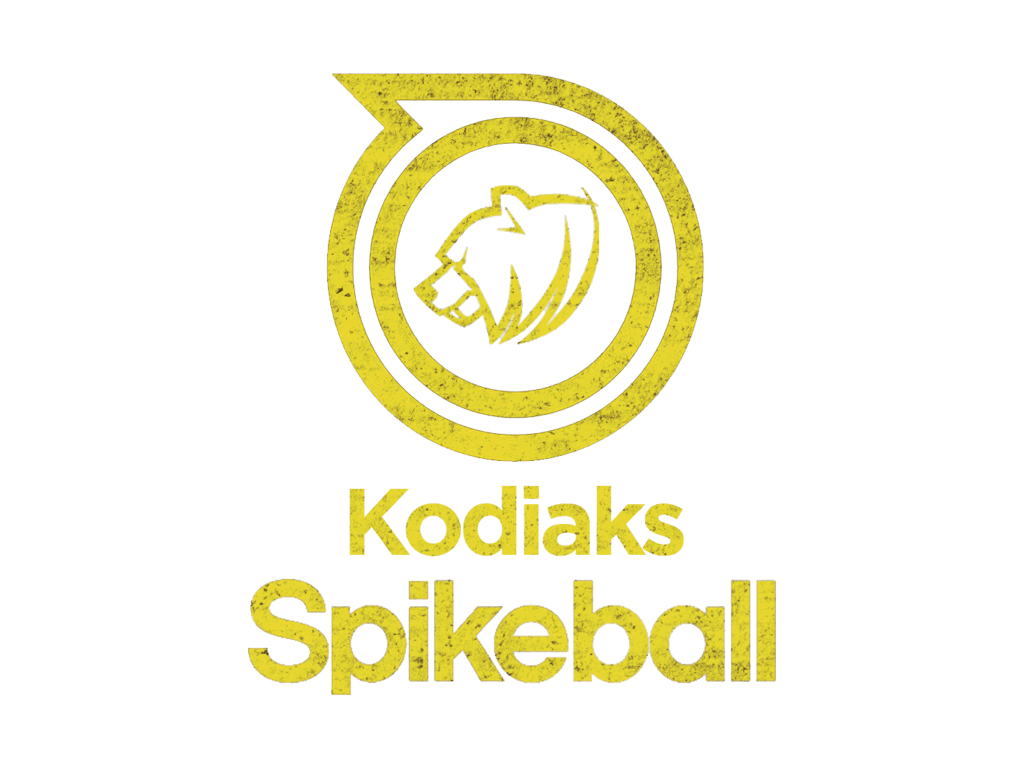 The Lethbridge College Kodiaks are planning to transform Spikeball from popular backyard party game to the next prime-time collegiate sport.

Kodiaks athletics manager Todd Caughlin has officially unveiled plans to add Spikeball as the seventh Kodiaks sport, set for launch in the 2019-20 season.

“Today’s announcement is the exciting culmination of over two years of research and hard work,” says Caughlin. “We always strive to stay ahead of the curve and want to continue to be a leader in the ACAC. Our working committee considered many factors, including financial sustainability, and Spikeball’s exploding popularity. In the end, it was a no-brainer to make the addition.”

Spikeball will be the first new sport for Lethbridge College since Futsal was added in 2017. The Kodiaks will now support seven sports, with Spikeball joining volleyball, basketball, cross country, indoor track, soccer and futsal.

The school will field both men’s and women’s Spikeball teams, and will also compete in co-ed competitions.

Kodiaks hope other ACAC schools will follow their lead

While Spikeball is a popular intramural and club activity in colleges across Canada and the United States, the Kodiaks are believed to be the first collegiate athletic program in North America to officially adopt the sport. 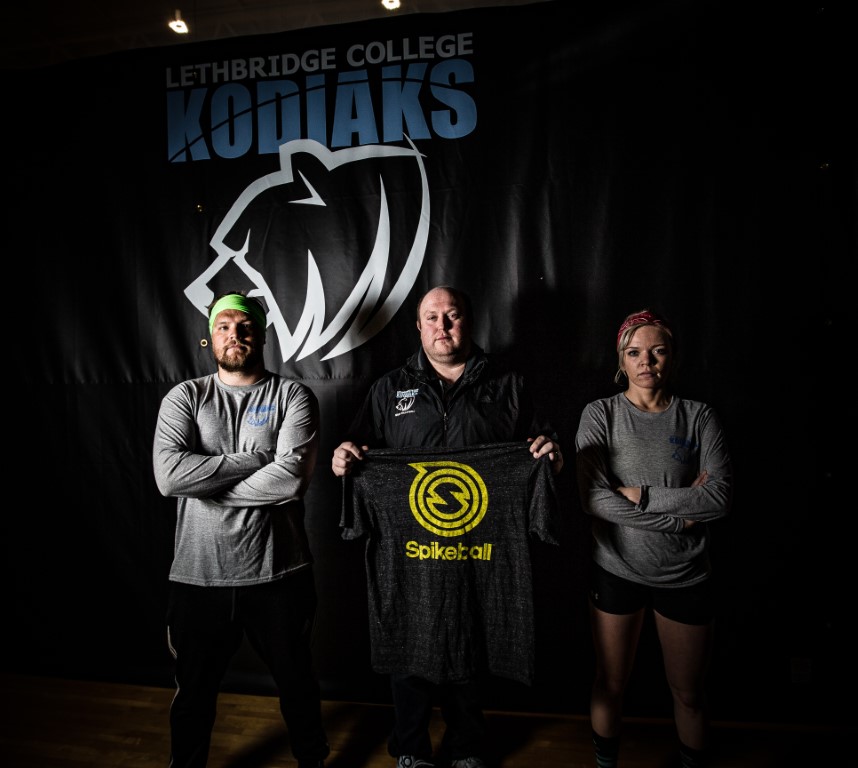 Caughlin believes fellow members of the Alberta Colleges Athletic Conference (ACAC) will follow the Kodiaks lead, paving the way for a conference-wide competition to be formed as early as 2021.

“Spikeball is a sport where you have to be nimble and think ahead, and that’s what we’re trying to do here,” explains Caughlin. “If we can prove to other schools that this can work and get three or four more schools on board, I’d fully expect a regular season and ACAC championship tournament to be formed within a couple of years.”

For now, the Kodiaks will open their inaugural season by playing a variety of club teams from across Alberta. They will also host their own weekend invitational tournament called the “Kodiaks Cup” tentatively planned for early January.

The inaugural season will culminate in an appearance at the 2020 College Roundnet National championships in April, where the Kodiaks will compete against the best collegiate club teams from across North America.

Gibos tasked with building the program

Where does one even find a Spikeball coach? A fair question to ask, indeed. 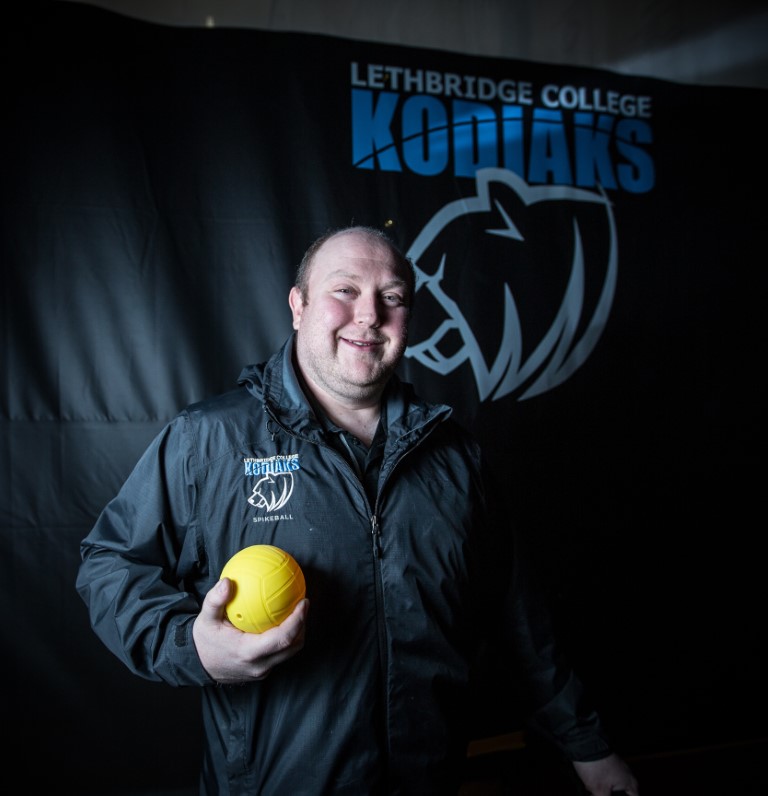 As it turns out, Caughlin didn’t have to look far, as he named current Kodiaks men’s volleyball coach Greg Gibos the first head coach in Kodiaks Spikeball history.

Gibos knows something about building a winning roster. He was named the 2019 ACAC South Division coach of the year after leading his men’s volleyball team to a 22-2 regular season record. The team also went on to win the first ACAC medal in program history.

Coaching Spikeball will represent a new challenge that Gibos is excited to tackle.

“It’s an exciting day for Kodiaks Athletics,” says Gibos. “I’ve been an avid Spikeball player since I heard it was a thing about five or six years ago. Since then, I’ve used it as a staple in my team’s off-season training plan. I’ve been known to win a few backyard competitions too, so I’d say I’m pretty qualified for the job.”

Gibos isn’t too worried about the challenges of learning the ins and outs of a new sport.

“The core of the game is very similar to volleyball. At the end of the day, it’s just a ball and a net. And the ring that holds the net, I guess. But that’s all it is. I can’t wait for the challenge of building a powerhouse Spikeball program.”

No shortage of interest will make recruiting easy

You may think that athletes would be hesitant to join such a unique and unproven sport, but according to Gibos, you’d be surprised. 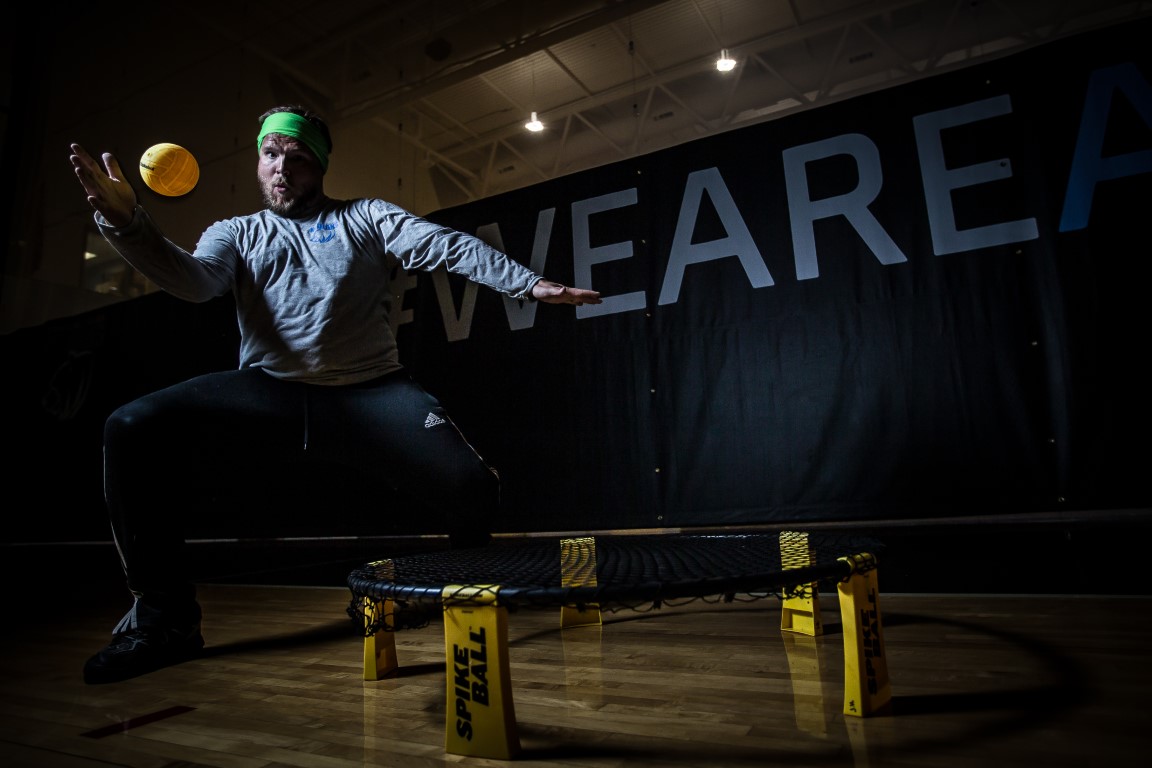 Gibos says recruiting athletes has been a walk in the park so far, which is good news as he strives to build a 16-athlete roster consisting of eight men and eight women.

“The interest has been overwhelming. I’m actually getting worried - my men’s volleyball guys are already wanting to jump ship to play Spikeball instead of volleyball,” laughs Gibos.

On the men’s side, he’s secured the talents of legendary southern Alberta Spikeballer Tanner Marcer.

He’s also made a significant signing on the women’s side, getting a commitment from Winnipeg native and former University of Lethbridge soccer player Meaghan Welby.

“Getting Tanner and Meaghan to commit is really big for our program,” says Gibos. “They’ve been consistent performers in all of the local drop-in sessions I went to watch last summer, and they really stood out at the Lethbridge College all-employee BBQ tournament last July. They show great teamwork on the co-ed side, and bring a natural chemistry to the pitch. I’m thrilled to have them.”

Marcer, who is one of the most recognizable faces on campus through his work with the Lethbridge College Students’ Association, can’t wait for the opportunity to showcase his talents on a bigger stage.

“I am ecstatic about joining the Kodiaks and expanding the Spikeball movement within Lethbridge, and also globally,” says Marcer.

“If I had one word to describe my game it would be – fierce or fearsome. Or smash… one of those words for sure.” 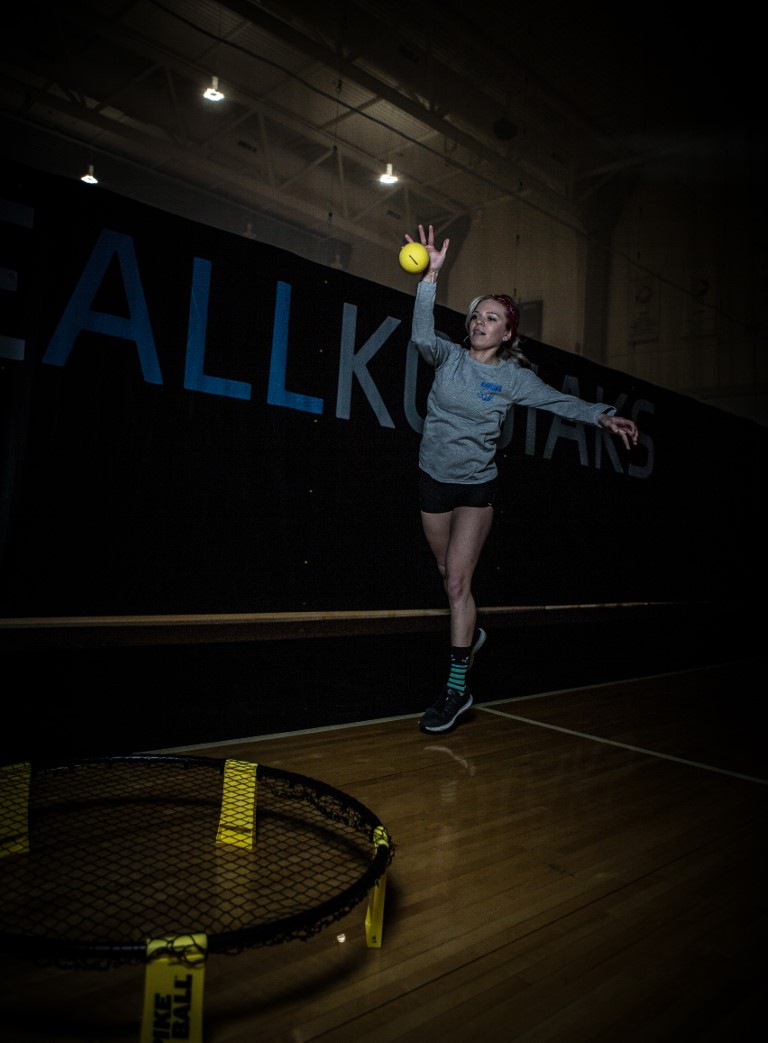 After playing three years of post-secondary soccer, Welby wanted to use her two remaining years of eligibility to help grow the sport of Spikeball.

“Our goal is to make Spikeball the next great Canadian sport,” says Welby. “I really want to inspire the next generation of Spikeballers. I mean if futsal can be a legit college sport, why can’t Spikeball?”

All Kodiaks Spikeball games will be streamed live for free on ACACTV.ca, and a rights deal with TSN8: The Ocho is currently in the works for select matches.

Are the Kodiaks done expanding into obscure sports? Not likely, says Caughlin

Caughlin says the Kodiaks aren’t done looking to expand their programs – and that competitive breakdancing is now on his radar.

“We always pay close attention to global trends in sport, especially with the Olympic Committee looking to add unconventional sports like skateboarding and breakdancing in 2024,” says Caughlin.

“I’ve been known to bust out a few epic dance moves myself every now and then. So would I love to eventually see a Kodiaks breakdancing team during my tenure? Absolutely. I might even volunteer to coach it. We’ll see what we come up with next April Fools’ Day.”

The Lethbridge College Kodiaks are a proud member of the Alberta Colleges Athletic Conference. Sadly, they are definitely not adding Spikeball in 2019-20, although the Kodiaks Communications team (who are avid Spikeball competitors) can keep dreaming. Happy April Fools’ Day! 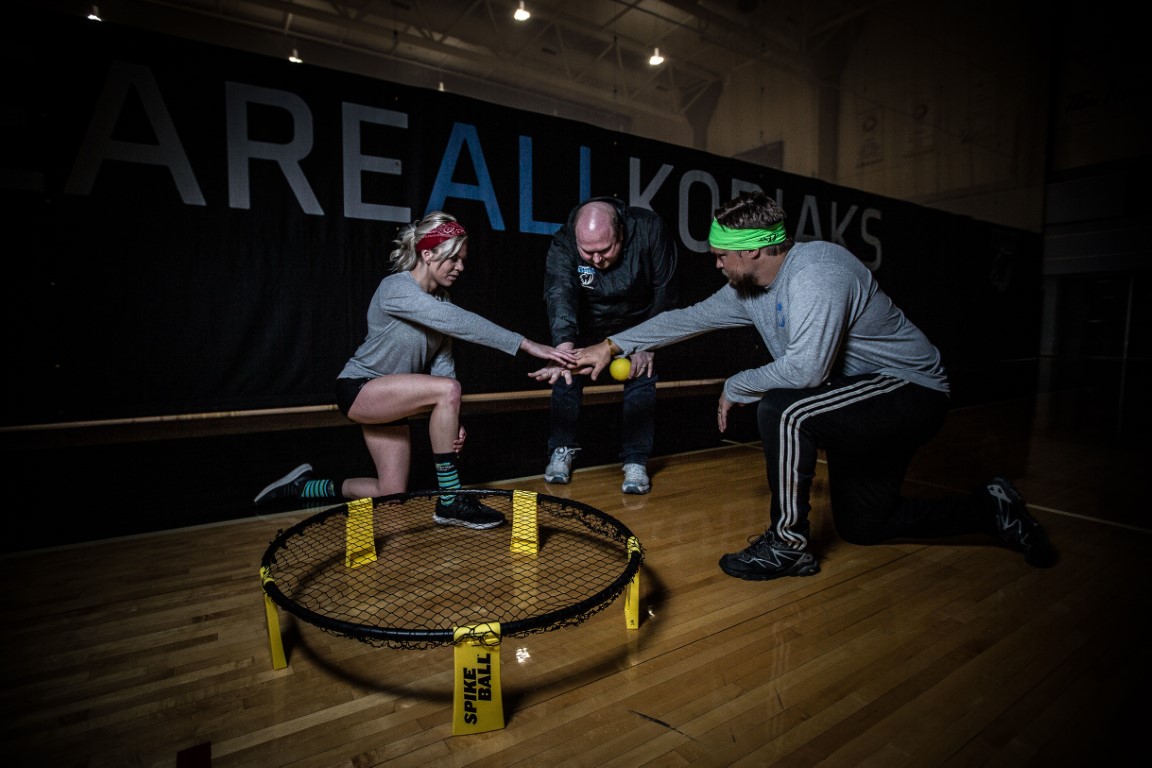