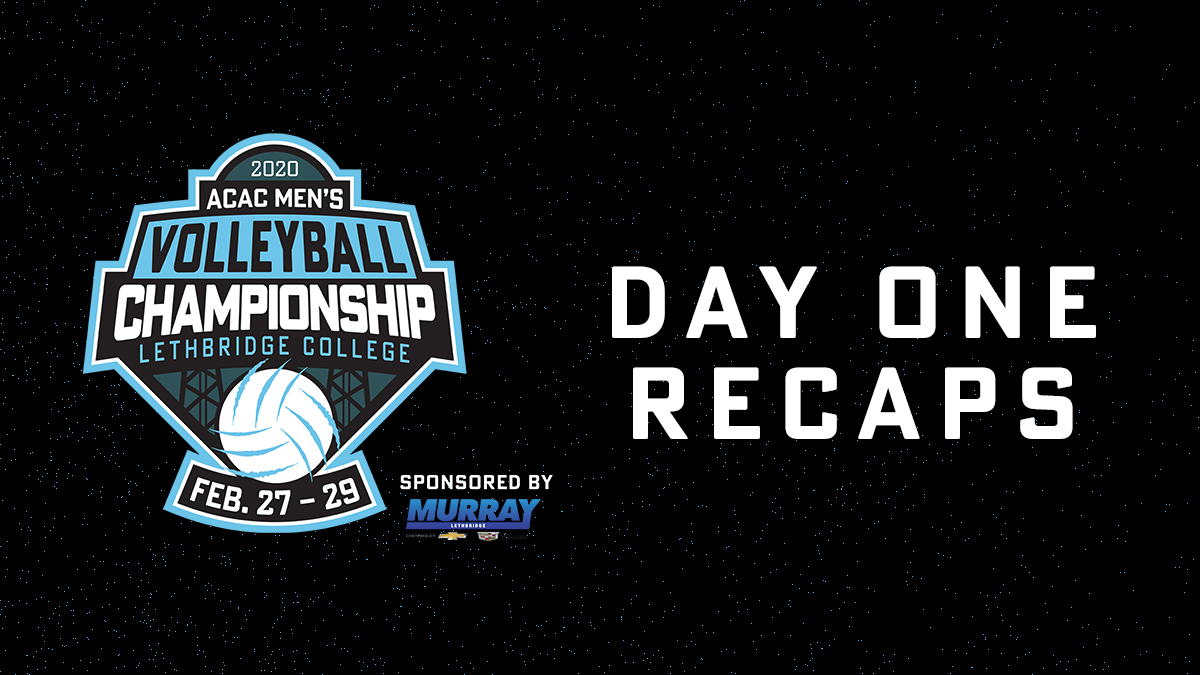 The conference top eight teams are battling through three days of action to crown a champion. The two finalists will both advance to the CCAA championships hosted by St. Thomas University in Fredericton, N.B.

Quarterfinals take place on Thursday, followed by semifinals on Friday and medal games on Saturday. More information is available on the tournament website.

Here are the quarterfinal results from the first day of action: 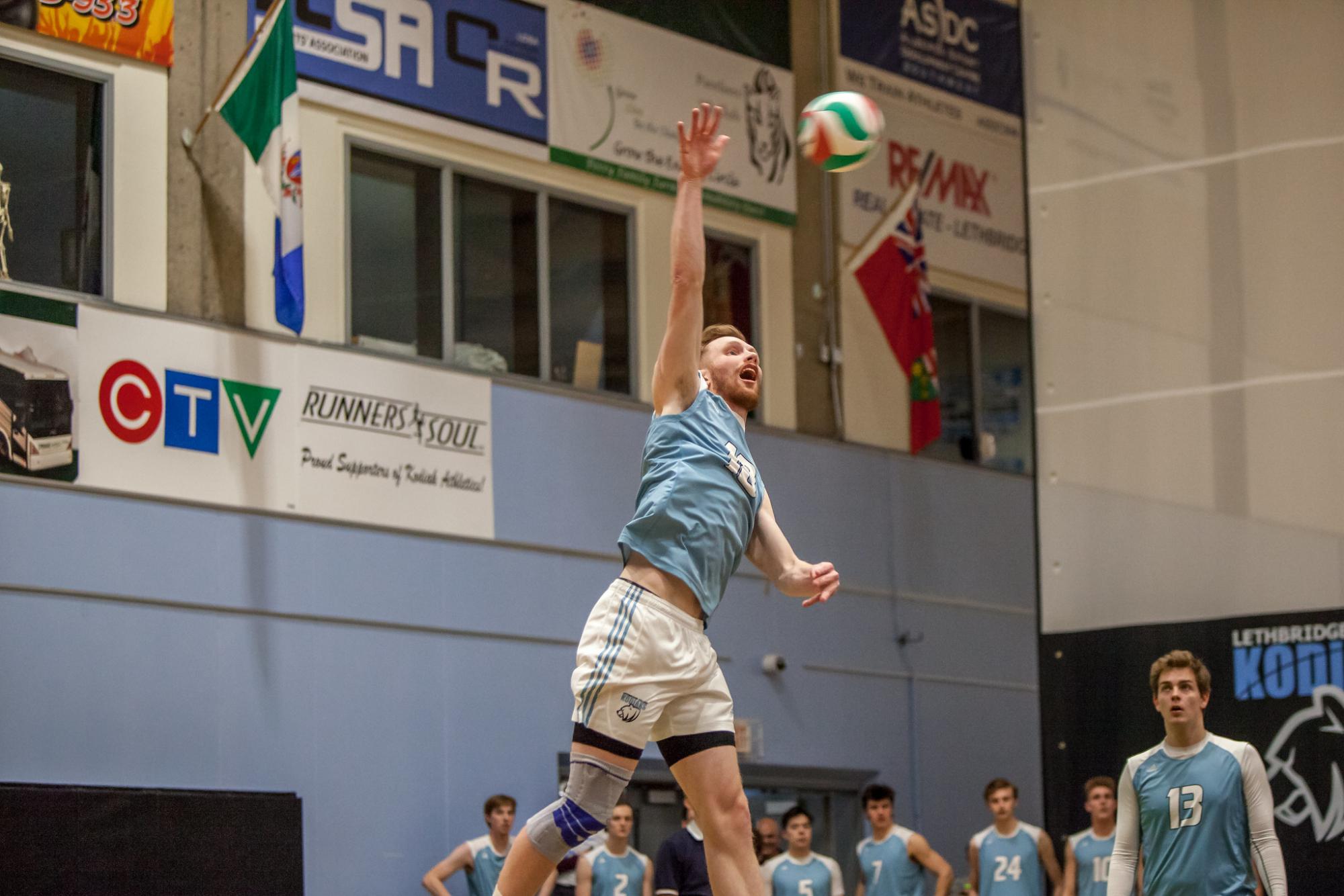 In front of a nearly-full and very boisterous Val Matteotti Gymnasium, the Lethbridge College Kodiaks thrilled the home fans and clinched a semifinal berth at the Murray Chevrolet Cadillac 2020 ACAC Men’s Basketball Championship. It was an error-filled effort by the hosts, but it was enough for a 3-0 win over the Lakeland Rustlers.

“We know we're going to at least be playing for a medal now in front of our home crowd, which is a big thing,” said Kodiaks coach Greg Gibos. “We might have ground it out, it might have been ugly, but hey, the championships are a learning experience, right? So tomorrow we're going to take everything that we learned tonight, talk about it in the room and then hopefully adjust for tomorrow and bring our best game.”

The second set was also close, but six more Hansen kills helped the Kodiaks keep a comfortable spread throughout a 25-18 win. Hansen had a game-high 13 kills, while the Kodiaks benefitted from several solid blocks from the front row kept throughout the match to hold momentum over the north division fourth-seeded Rustlers. Lakeland opened a brief lead in the third set, but four kills from Kodiaks player of the game Michael Hummel (fifth year, General Studies, Picture Butte) pushed the nationally second-ranked Kodiaks to a 25-18 win and a straight-sets victory.

“We just weren't quite ourselves, I think usually we pride ourselves on our first contact and we weren't very good on that skill tonight on defense or especially on service,” said Rustlers head coach Taylor Dyer. “It's been eight or 12 years since Lakeland College has been at the conference championship, so the learning is not done yet. We’ve got to make sure that we find a way to learn from this match and really soak in what it's like to play in this kind of atmosphere.”

The Kodiaks are the defending ACAC silver medalists and are into the ACAC semifinals for the third straight season. They will play the SAIT Trojans in a semifinal at 8 p.m. on Friday. Lakeland battles Keyano in a consolation-side game at 3 p.m. 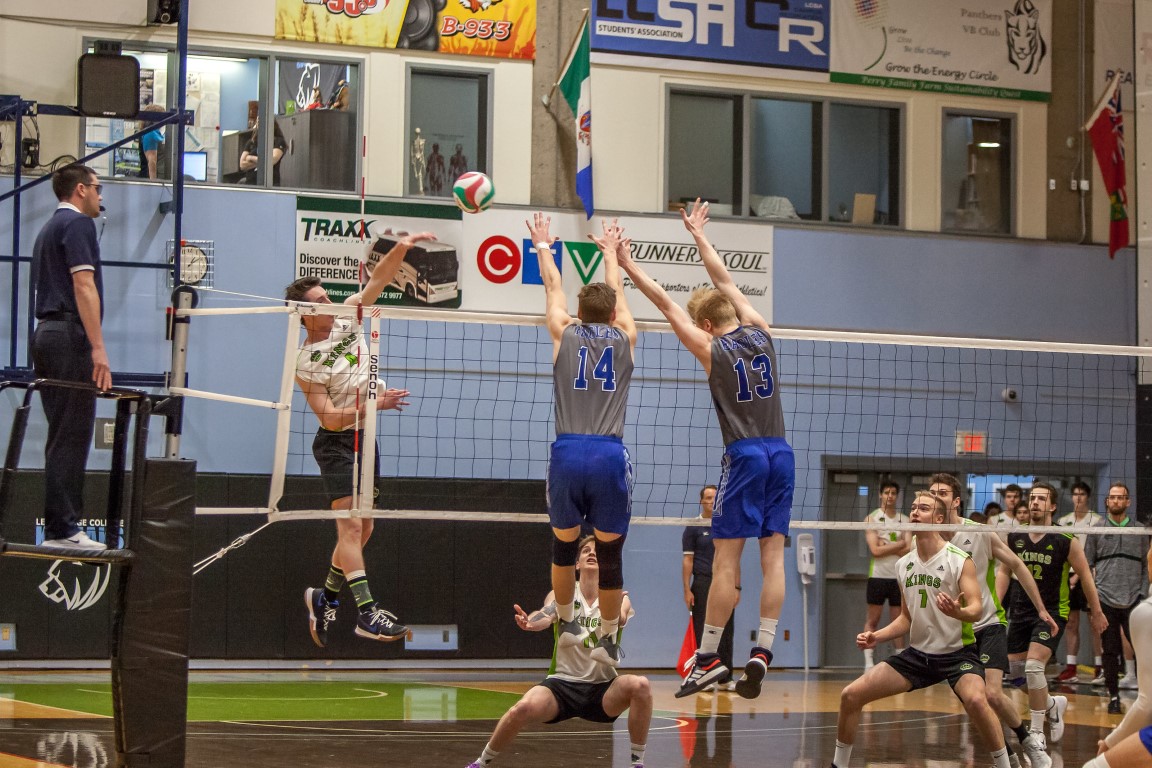 There were two kings, but only one crown, and in the end, it was the Red Deer Kings who pushed past The King’s University Eagles. In the opening match of the Murray Chevrolet Cadillac 2020 ACAC Men’s Volleyball Championship, Red Deer College jumped out to an early lead before closing out a 3-1 victory.

“It's the type of match that you want as the first match,” says Red Deer Kings head coach Aaron Schulha. “We did a lot of good things but had to battle through some adversity, and it could have been a different game if not for all the hand calls on both sides. I think it's important for our guys to know that we can be much better and more consistent, but it's always nice when you battle through that adversity.”

Red Deer, the second seed in the south division, entered the match on a 10-game winning streak, and kept rolling in the first set. Six-foot-two Carter Hills (first year, Bachelor of Education – Science, Legal, Alta.) who was named ACAC rookie of the year the night before, led Red Deer with four kills from the off-side in a 25-20 win. The Kings kept that momentum rolling in a dominating 25-10 second set.

However, the Eagles fought back with a strong third set. They rallied from an early deficit and took their first lead of the game at 19-18. After some back-and-forth action, Tanner Piers (second year, Social Sciences, Edmonton) and Evan Veldman (third year, Arts, Terrace, B.C.) had strong plays late in the set that helped the Edmonton side to a 25-23 victory.

“I can appreciate the value in coming back,” says King’s University head coach Patrick Winand. “I think what we were missing towards the end is just a little bit of experience – over 50 per cent of our starting lineup are second years – so we knew that we don't necessarily have the championship experience. But I think towards the end was a good example of what this team could do when they are third, fourth and fifth years.”

Momentum went back-and-forth in an intense fourth set. Red Deer finally caught a break late in the set with big hits and solid serving to keep them in the game and to hold off The King’s University Eagles 25-20.

The Kings move on to Friday’s 6 p.m. semi-final against either Briercrest. The Eagles move onto consolation play against NAIT on Friday at 1 p.m.

Players of the Game: 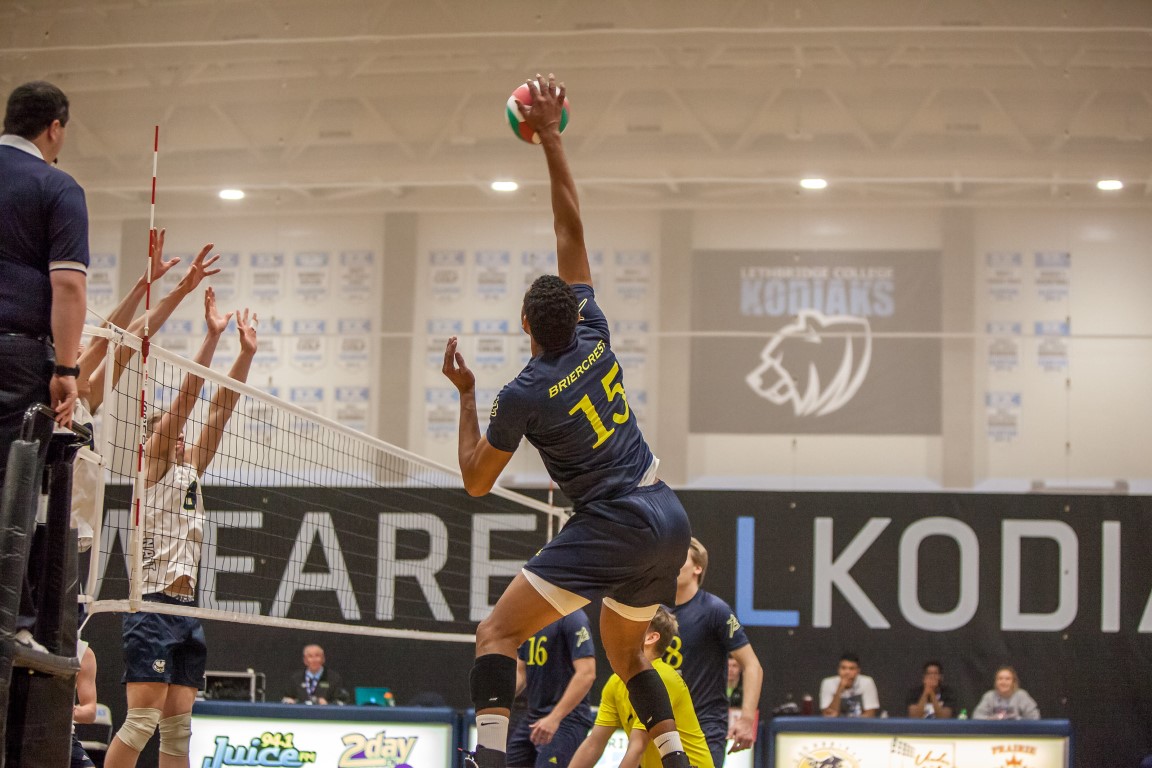 It took just two games to get the first major upset of the Murray Chevrolet Cadillac 2020 ACAC Men’s Volleyball Championship. The Briercrest Clippers, seeded fourth in the south division, knocked off the north division champion and nationally ninth-ranked NAIT Ooks in four sets to earn a semifinal berth.

“I'm thrilled that the guys, even after getting out to a little bit of a slower start, were able to respond,” said Clippers head coach Nigel Mullan.

Both teams took some time to settle in during the first set, as several unforced serving errors affected the momentum, but it was NAIT that eventually stabilized its game, riding the strong blocking of Mitch Lewington (fourth year, Architectural Technology, Perth, Australia) to a 25-20 opening set victory. But the Clippers made a series of adjustments after the opening set and took control of the match. Bryton Codd (second year, MA Leadership and Management, Belize City, Belize) began to heat up in the second set as the Clippers used momentum from a late set timeout to tie the match at one with a 25-18 victory. Codd finished the match with an incredible 34 kills.

“We had to basically flip everything that we were doing because it just wasn't that game,” said Mullan. “We've had that talk throughout the year, so it wasn't an earth-shattering moment, but we did have to make some adjustments to what they were doing. It was exciting to see our guys respond to that.”

The Clippers continued to roll in the third set, led by libero Brady Watchel (first year, BA Business Administration, Prince Albert, Sask.), who earned 28 digs in the match and ACAC Player of the Year Karym Coleman (second year, BA Business Administration, Belize City, Belize), who had 15 kills. The Clippers won set three 25-11 to take a 2-1 lead in the match. NAIT stayed in the game in the fourth set with great defense and solid blocking, but Codd’s attack was too much and the Clippers finished off the match with a 25-20 victory.

“Our guys never went away, it's a team that very much plays for each other,” said Ooks head coach Greg Gulash. “They're a team that likes to wear their heart on their sleeve and go to battle for each other all the time. It’s a good group of guys that win or lose, they're in it and they're going to give you everything they have and that's what they brought.”

Briercrest moves on to play Red Deer College in an all-south division ACAC semifinal at 6 p.m. on Friday. NAIT will take on The King’s University in consolation play at 1 p.m. 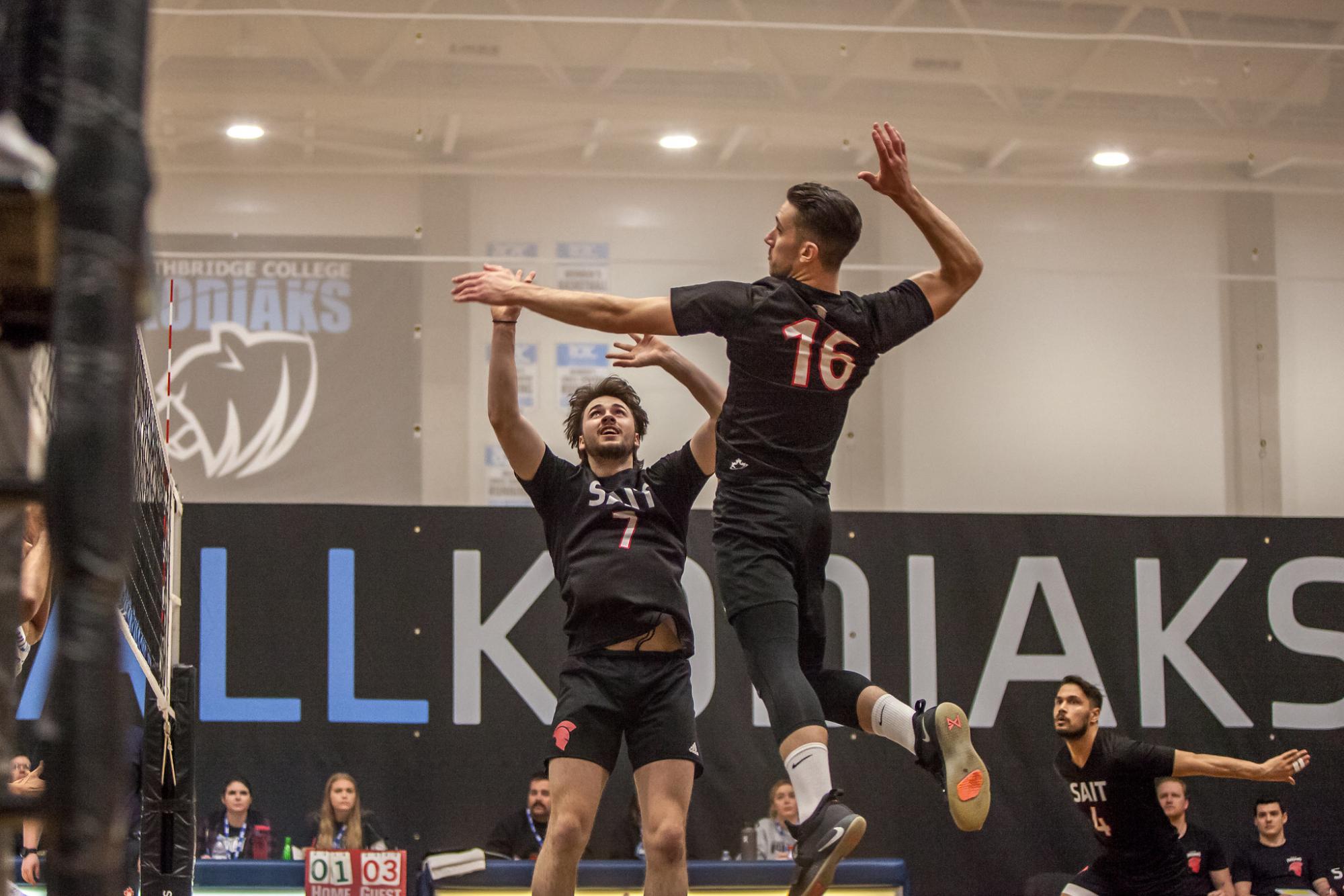 There will be a new ACAC men’s volleyball champion this year, as the SAIT Trojans upended the defending champion Keyano Huskies in quarterfinal play at the Murray Chevrolet Cadillac 2020 ACAC Men’s Volleyball Championship. In a pitched battle between two nationally-ranked teams, the Trojans got out to an early lead and held off a Huskies rally for a 3-1 victory and a berth in the semifinals.

“I thought we played – for the most part – at a consistently high level, which is something we've been working on,” said Trojans head coach Dallas Soonias. “We knew they were going to push really hard, so we talked about it. We made sure everybody knew it happened and it is happening. We did our best to hit the reset button and push back because if you just ignore that there's a team pushing at you, if you try to act like it's not happening, it allows it to keep happening.”

The Trojans never trailed in the opening set, and broke it wide open mid-way through with a 10-1 run. The strong serving of ACAC all-conference team member Maddux Greves (second year, Bachelor of Business Administration, Calgary), who fired a pair of aces, and Tyler Latu'ila (fifth year, Bachelor of Business Administration, Auckland, New Zealand), who had one ace along with a key block led the Trojans to a 25-14 win.

It was a back-and-forth affair in the second set. Brendan Vanderlinde (third year, Machinist Technician, Sherwood Park) was an offensive force to help his team create some distance over the Huskies in a 25-22 victory. SAIT teased the Huskies as the Huskies took the third set 25-21. ACAC north division rookie of the year Joao Cunha (first year, College Prep, Rio de Janeiro, Brazil) came alive with six kills in the set. But Riley Grusing (third year, Civil Engineering Technology, Calgary) helped lead his team to victory in a fourth and deciding set with six kills in a 25-13 win.

“We couldn't pass, we were not ready for that service pressure and we couldn't serve well enough to get them into enough pressure to have Maddox run around the court,” said Huskies head coach Keegan Kuhr. “I'm happy we didn't get swept but you know, it's tough to come out here and have your whole season end like that.”

The Trojans move into Friday’s 6 p.m. semifinal against either Lethbridge. Keyano plays a consolation side game against Lakeland at 3 p.m.