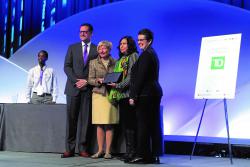 Lethbridge College, which was founded in 1957 as Canada’s first publicly-funded community college and is situated on traditional Blackfoot territory in southern Alberta, received a bronze Indigenous Education Excellence award today at the Colleges and Institutes Canada (CICan) annual conference in Ottawa.

Marcia Black Water, the college’s FNMI Student Coordinator and a 2004 graduate of the college, accepted the award on behalf of the institution.

From the college’s earliest days, it has been committed to and valued its Indigenous learners and communities and worked to nurture a culture that respects First Nations, Métis and Inuit intellectual and cultural traditions. Over the years, the college has developed Indigenous-centred programs and services to meet the social-economic, education and training needs of the First Nations communities from the region – the Kainai, Piikani and Siksika nations.

“In addition – and perhaps most importantly – we have cultivated close, friendly and professional relationships and partnerships with our FNMI colleagues based on respect, trust, listening and understanding, all while remaining respectful of First Nations cultural practices and ways of being,” added Dr. Burns. “These relationships and partnerships have evolved to include services for Métis and Inuit students as well, and today we have Elders on campus representative of all groups.”

FNMI Services at Lethbridge College, in collaboration with many internal and external stakeholders, developed a three-year Niitsitapi Indigenization Plan for 2016-19. In addition, in recognition of the recommendations emanating from the Truth and Reconciliation Commission of Canada and as a signatory of CICan’s Indigenous Education Protocol, the college has also implemented an FNMI President’s Council. This council is composed of college and First Nations community leaders and provides guidance and direction to an internal FNMI committee as it works to implement a three-year FNMI Indigenization Plan, which will further enhance its already extensive program and service offerings.

“Lethbridge College understands the importance of recognizing the traditional Blackfoot territory they are located on and in giving respect to the culture as well as the different First Nations, Métis and Inuit students that choose Lethbridge College,” said Aloyuisius Black Water, a 2003 Computer Information Technology graduate and member of the Lethbridge College Alumni Advisory Council, in the award nomination.

During the 2015-2016 academic year, 423 FNMI students enrolled in classes at Lethbridge College, which included more than 190 sponsored students from 40 FNMI funding organizations (Bands or agencies) from Alberta, Saskatchewan, British Columbia, Manitoba, Ontario and Quebec. The college also has students from both the Yukon and NWT who are funded from their territory. Additionally, college staff members visit more than 100 FNMI bands and communities annually for student recruitment and relationship- and community-building purposes.

Lethbridge College recognizes the importance of intertwining tradition with educational and career goals for its FNMI students and in sharing this culture with other students on campus. FNMI Services also provides a “Circle of Services” to assist learners in being successful on their journey of attaining a post-secondary education. The college ensures that the voice of its Elders is included at the table to give insight to some of the realities students are faced with.

“My cultural support extends to both Niitsitapi (Indigenous) and non-Niitsitapi students, in hopes I can pass on my cultural knowledge to their benefit in learning and understanding,” said Blackfoot Elder Peter Weasel Moccasin in the award nomination. “Being involved with the college gives the opportunity to bring the Blackfoot language and culture in a positive manner into the learning of students.”

CICan is the national and international voice of Canada’s publicly supported colleges, institutes and polytechnics. The association works with industry and social sectors to train 1.5 million learners of all ages and backgrounds at campuses serving over 3,000 urban, rural and remote communities in Canada.

“The recipients of our awards of excellence embody the best that colleges and institutes have to offer in a variety of sectors and disciplines,” said CICan President and CEO, Denise Amyot. “They are examples of innovation and dedication that make our institutions proud and contribute to the vibrant and welcoming culture found on campuses across Canada.”

The Colleges and Institutes Canada Awards Program recognizes and promotes excellence within Canadian colleges, institutes, cégeps, university colleges and polytechnics. The awards showcase the extraordinary contribution of individuals to their college/institute communities and highlight the role of our institutions in social, cultural and economic development.

Additional details about opportunities for FNMI education at Lethbridge College can be found online or by calling 403.320.3242.