In honour of Black History Month, we’re sharing stories of students and employees to elevate Black voices and recognize their contributions to making our campus community a vibrant place. 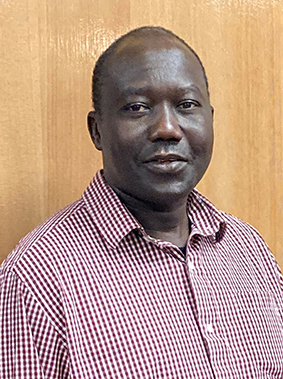 Eizak Amawi vividly remembers the first time he ever saw snow. It was the winter of 2006 at the Calgary International Airport – the welcome end to a journey that had started more than seven years earlier when he left the political turmoil and violence he faced in his home in South Sudan and fled as a refugee to Cairo, Egypt, and then, with an aunt’s sponsorship, on to Alberta.

“When we landed, I saw something that looked like sugar on the ground – sugar!” he recalls with his eyes crinkling, sharing the smile behind his mask. “I said, ‘Auntie what is this?’ and she laughed.” That first winter, living in Brooks near his aunt, Amawi suffered from headaches when he would go from the extreme cold outdoors to the heated indoors. “But I got used to it,” he says, just as he got used to the snow.

While his arrival was chillier than anything he could have imagined, Amawi says he has felt the incredible warmth of community in Canada – and especially since 2007, when he moved to Lethbridge and started learning and later working at Lethbridge College.

Amawi, who has completed the English as a Second Language and Open-Studies programs before graduating in 2020 with a diploma in General Studies, has also worked as a caretaker at the college since 2010. His wife, Niun Gougi, is also a student at the college, learning in the English as a Second Language program. They have five children, aged 13, 11, 8, 4 and 7 months.

He says he uses his educational journey to help motivate their children. “I told them, if I get a diploma, then you have to get a degree,” he says. “If I get a degree, you have to do a master’s. You have to do one step more! And they are doing really well in school. I just want to set an example. If the kids say ‘Oh, this is hard,’ I say what about me? I am working to support a family and am also a student.”

Education, he tells them, is about opportunity. “Education has nothing to do with ability,” he explains. “Yes, there are obstacles – lack of sleep, lack of money – but education is the key to success in life. If you have education, you have everything. There are no limits.”

Amawi says his “family” at the college made it possible for him to achieve these educational goals. His supervisor, Caretaking Services manager Sherryl Hernan, helped him schedule around his classes, and his coworkers supported him during busy times when he had tests or big assignments due. “We are brother and sister, uncle and auntie to each other,” Amawi says. “I am very glad for my team here, and for being a part of the college.”

The fact that employees in all areas are treated equally is something else he appreciates. “Paula, Lee and Sherryl, they ask for your input,” he explains, referring to college President and CEO Dr. Paula Burns, Director of Facilities Management Lee Lively, and Manager of Caretaking Services Sherryl Hernan. “You feel like a human being when you are part of the plan. We are here as caretakers, and we are here as part of the big picture.”

And Amawi says he is “very glad to be a Canadian. This is home. And what is the meaning of home? One is love – we love each other. It’s a small community and we help each other. Two – my kids now, they have the same opportunities as other kids. They don’t face discrimination. They have the ability to pursue whatever they want to achieve.”