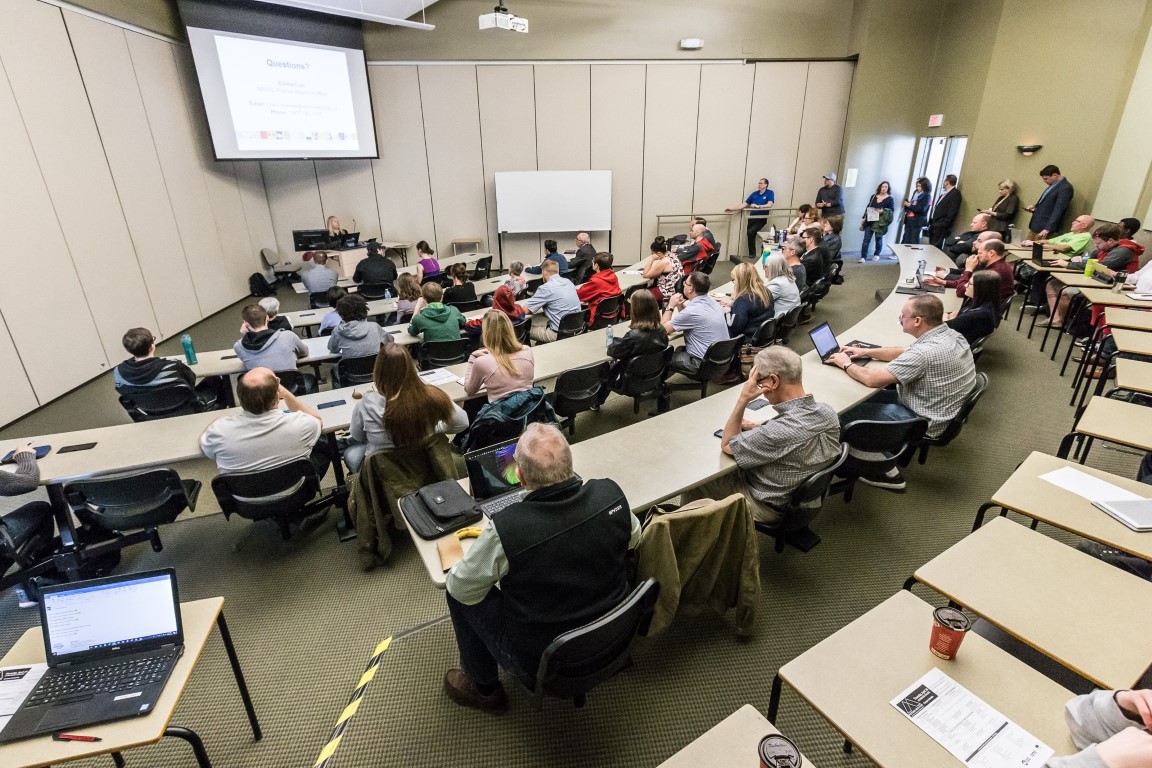 On the heels of a successful inaugural event, Lethbridge College is pleased to announce that Merging Realities: An Event of Multiple Perspectives will move forward as an annual affair. On April 26, the college proudly hosted the world’s first full-day conference held completely in virtual reality.

"The virtual and augmented reality industry is being built on firsts, and Merging Realities was no exception to that,” says Alex Jackson, CEO, Hone Virtual Education Ltd. and president of the Alberta chapter of the international VR/AR Association. “This event showcased the potential of this technology to bring the world together by simply pushing the power button. The future is now.”

Since the convention was the first of its kind, there was no precedent to guide the planning team, says Mike McCready, an instructor in Lethbridge College’s Multimedia Production program. “The virtual reality community supported us and helped to create an exciting buzz around Merging Realities, significantly contributing to its success,” he adds. “I’m excited to see how much bigger it can grow in future years.”

Merging Realities brought together industry leaders in virtual and augmented reality (VR/AR) to explore applications and future advances. Keynote speakers from Google and other powerhouse companies shared the exciting applications of VR and AR and offered important networking opportunities to those in attendance.

Some participants gathered on-site at Lethbridge College, but the majority joined in virtually from around the world. Participants from five continents, 16 countries and 84 cities took part either in-person or online.

The event would not have been possible without Doghead Simulations’ Rumii platform, college organizers say. The company supplied technical support, licensing and mentorship to organizers.

“Merging Realities was a game changer for our Rumii software, bringing to life our vision at Doghead Simulations for a world that is further connected by technology and virtual reality,” says Amber Osborne, Chief Marketing Officer, Doghead Simulations.

The innovative and interactive Merging Realities conference helped Lethbridge College in its goal to position itself at the helm of VR and AR development in post-secondary education.

“Lethbridge College is leading the way for people who are interested in getting involved with new and emerging technology,” says Kris Hodgson, chair of the college’s School of Media and Design. “Being involved in the early stages of VR and AR means that as the technology evolves, we will play an important role in shaping the way educators and industries use the medium. This industry is moving so rapidly that people who have been in it for only one to two years are now subject matter experts.”

As the interest and demand for virtual and augmented reality increases, the college will look to share its growing expertise with the community through Corporate and Continuing Education courses beginning this fall.

A date for the second annual Merging Realities conference will be announced in the coming months.

“VR and AR will have a lasting impact on the future of meetings and employee communications. Being part of this ground-breaking event organized by the visionaries of Lethbridge College was not only fun, but also inspirational.”

"Merging Realities was the beginning of something truly transformative. Presenting a keynote to hundreds of people around the world with all types of media – slides, audio, video and 3D models in VR – without having to take one flight is a game changer! On top of that, having laser hands is just plain fun!"