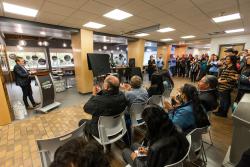 Lethbridge College’s history came alive today during the unveiling of its new Founders’ Square, a space in the heart of campus dedicated to telling the story of the land where the college now sits and showcasing the institution’s lasting legacy.

Founders’ Square, a capstone project planned as part of the college’s 60th anniversary events in 2017, opened just before the start of the community-wide day of celebration at Coulee Fest. It was funded by Lethbridge College, with the support of $75,000 from the Government of Alberta’s Community Initiatives Program’s (CIP), while additional funds from the Community Foundation of Lethbridge and Southwestern Alberta though the Community Fund for Canada’s 150th were used to commission a piece of Indigenous art and additional Indigenous components featured in the new space. 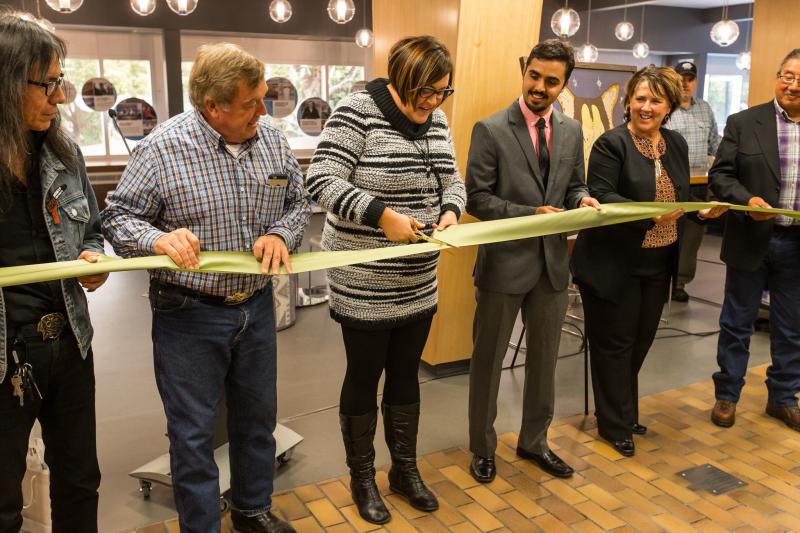 “We are so proud of the history that is shared in this remarkable new space right in the core of our campus, which is situated on traditional Blackfoot territory,” says Lethbridge College President and CEO Dr. Paula Burns. “The creation of the college was truly a collaborative community effort, one that happened in partnership with the University of Alberta and local school districts, and which involved leaders in the city and in the surrounding rural communities who were dedicated to building Canada’s first publicly-funded community college.

“It has been this community that has supported and sustained us in our work these last six decades as we have being leading and transforming education in Alberta,” Dr. Burns adds. “Dedicating a space on campus to telling these stories seemed like a natural way to cap off our 60th anniversary celebrations.”

The area features a specially-commissioned painting by Blackfoot artist William Singer III a member of the Blood Tribe/Kainai, as well as Indigenous art and artifacts that celebrate the college’s history and alignment with the Indigenous culture.

In addition, visitors will find:

Founders’ Square honours the work of the visionaries who brought post-secondary education to southern Alberta, including Kate Andrews, the college’s first board chair, as well as Gilbert Paterson, James Cousins and the initial faculty members who began a six-decade tradition of excellence in teaching. It is located in the heart of the college, along the corridor that connects the north, Centre Core entrance with the south entrance of the new Trades, Technologies and Innovation Facility, which will have its grand opening next week.