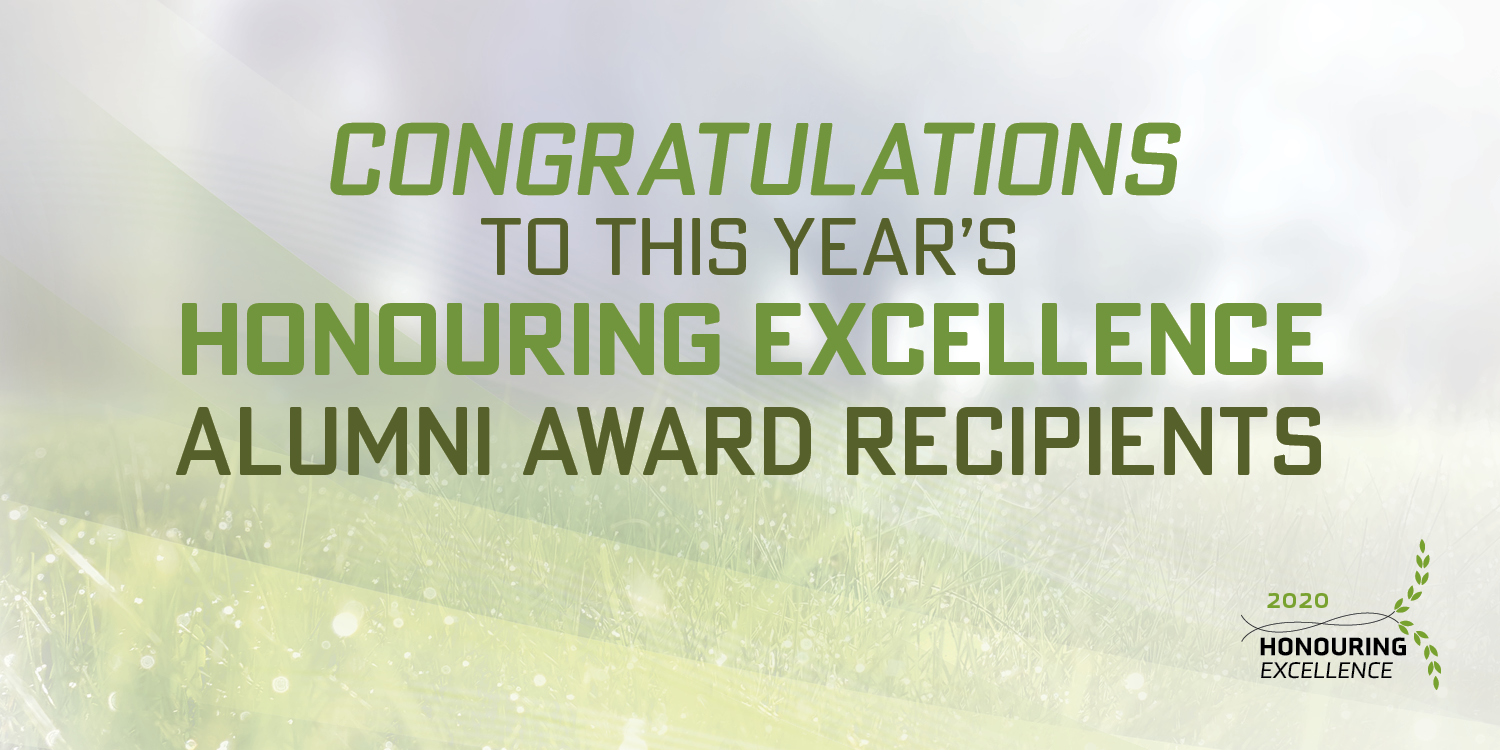 “Honouring Excellence is our opportunity to really look at the people who make Lethbridge College great,” says David Cocks (Engineering Design and Drafting Technology 2001), chair of the Alumni Advisory Council. “Our graduates are the ones who carry our flag out to the world. We are proud of the work they do every day, and these individuals deserve recognition for the great careers they have built and the ways they have given back to their communities since leaving Lethbridge College.”

“Every time we get together to sort through the nominations, it gets harder and harder to choose the winners,” says Jordan Karst (Communication Arts – Broadcast Journalism 2005), Honouring Excellence chair. “I don’t think enough people are aware of the amazing talent that comes through the hallways of Lethbridge College each and every year. We have so many graduates who go on to do exemplary work in their field and give back to the college in amazing ways. This year, our award winners are a healthy mix of people who are leading the way in their professions both in the city and abroad.”

Sponsorship opportunities are still available and tickets for the Honouring Excellence event are on sale now. More information is available at lethbridgecollege.ca/honouringexcellence. Tickets are available here.

The 2020 Honouring Excellence award recipients are: 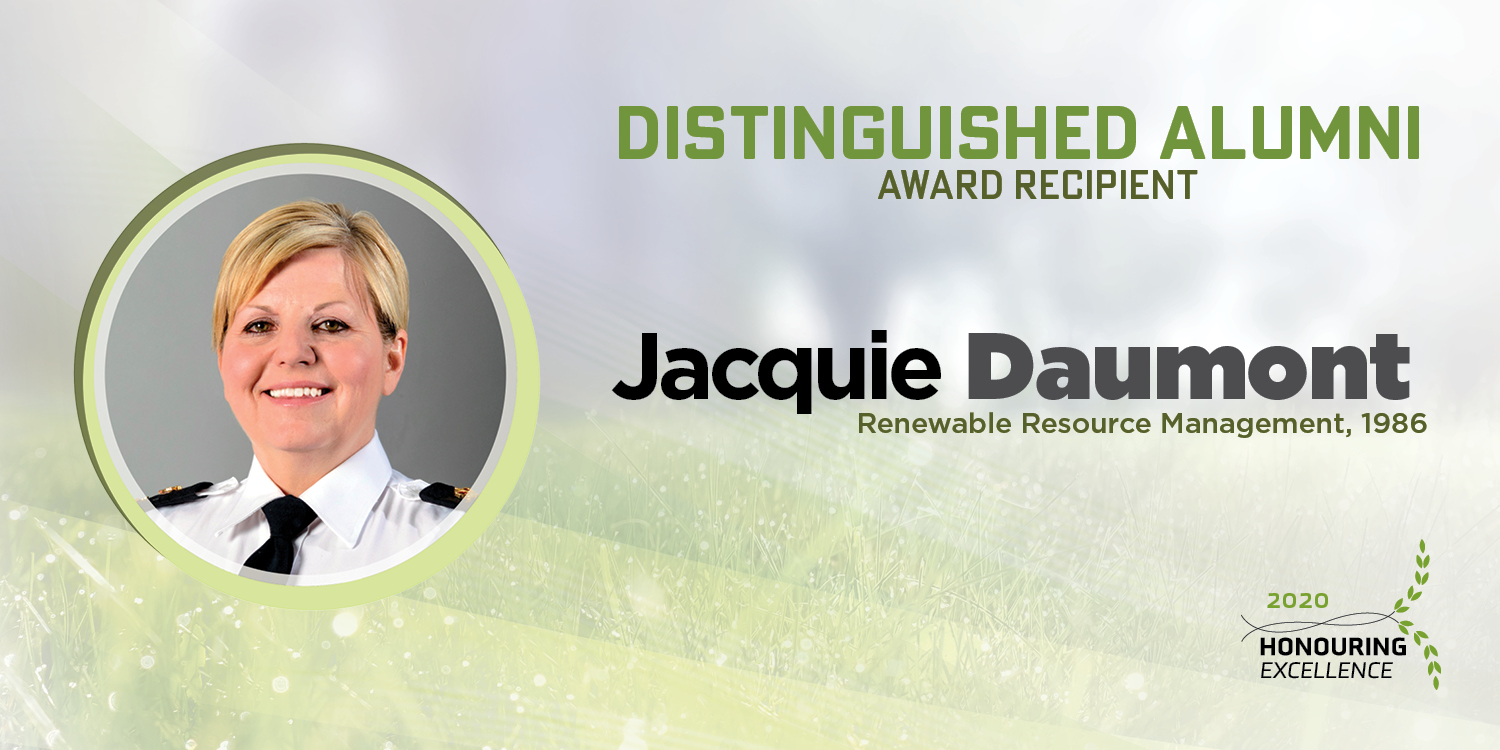 Jacquie Daumont is this year’s Lethbridge College Distinguished Alumna. Since beginning her career in commercial vehicle enforcement in 1986, Daumont has risen through the ranks to hold one of the province’s top positions.

Born and raised in central Alberta, Daumont began her career with Alberta Parks and Alberta Fish and Wildlife before joining Alberta Justice and Solicitor General, Commercial Vehicle Enforcement Branch (CVE) in 1989. She began as an officer before moving to management, and she has been in her current position as deputy chief working in Red Deer since 2014. She also served as acting chief for the branch from March 2018 to October 2019.

Daumont’s career accomplishments include overseeing CVE’s meritorious law enforcement accreditation with excellence, from the Commission on Accreditation for Law Enforcement Agencies, Inc. (CALEA). She is President of the Canadian Police Accreditation Coalition; recipient of the Governor General of Canada Exemplary Service medal; and recipient of the Alberta Peace Officer Long Service medal and the Alberta Emergency Services medal. She is also a member of the Alberta Association of Chiefs of Police. In 2003, Daumont was recognized with a Premier’s Award of Excellence and has been awarded numerous Government of Alberta teamwork and innovation awards.

Daumont has worked closely with Lethbridge College to deliver training to all new recruits of CVE, and she supports a scholarship to Commercial Vehicle Enforcement program graduates. She recently collaborated with the college to update the training program to a competency-based curriculum and also serves as a member of the School of Justice Studies Program Advisory Committee. An avid volunteer, Daumont has served on the board of directors for the Legacy Place Society and the Strive Dance Academy Society and is currently serving a three-year term as Commissioner on the Board of Commission for CALEA. 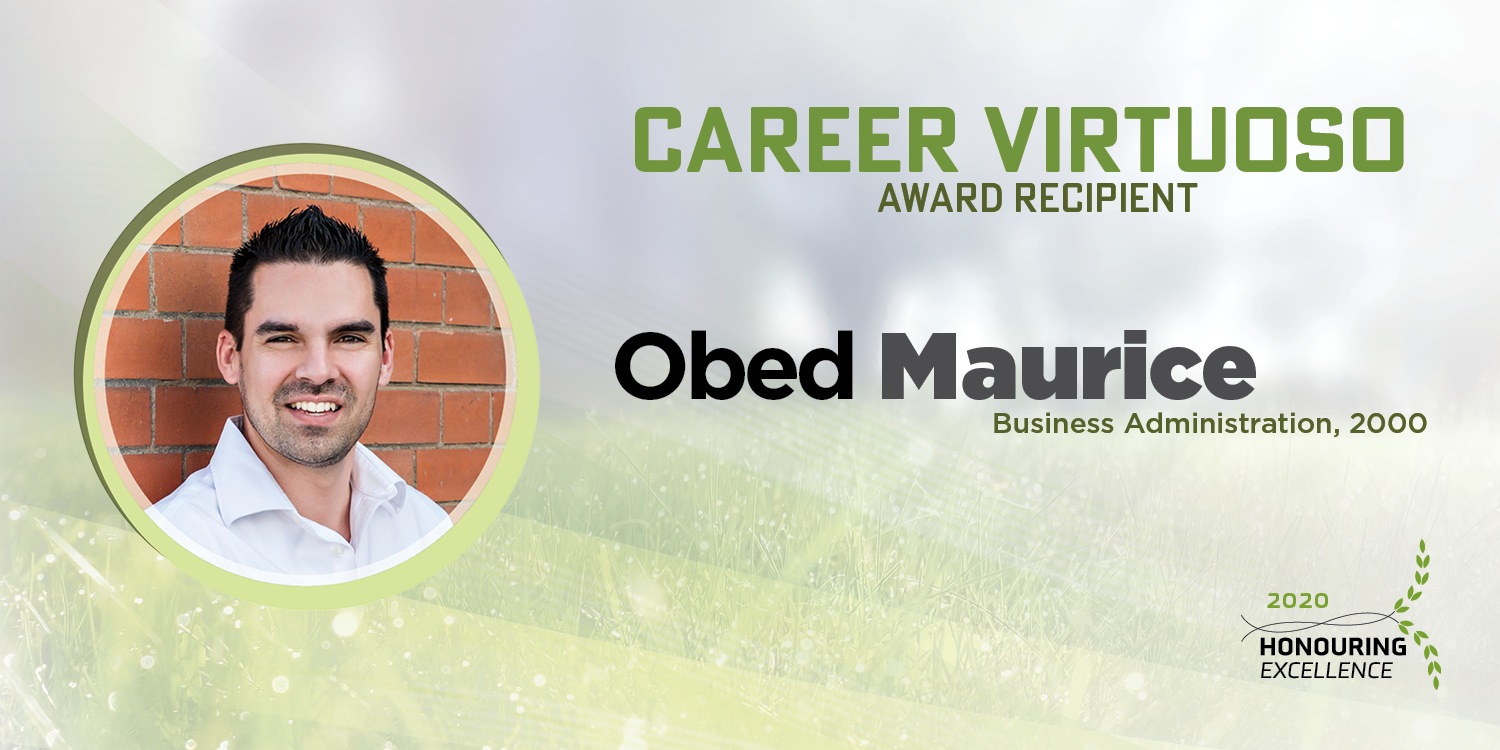 Obed Maurice is this year’s Career Virtuoso award recipient. A lifelong entrepreneur, Maurice has always sought opportunities to improve the traditional ways of doing things. Asking “why not?” is his typical response when considering an out-of-the-box idea. Following his graduation from Lethbridge College, Maurice received his Bachelor of Management degree from the University of Lethbridge, and then went on to earn his Chartered Accountant designation. Entering industry, Maurice looked for opportunities to automate, enhance and refine processes, while improving the customer experience for his clients. In 2011, he founded Maxim Management, one of Canada’s first virtual accounting firms.

In 2018, Maurice merged his practice to join forces with Avail CPA. As a partner at Avail LLP, Maurice has set a goal of leading the accounting industry into the future and changing the way the profession is viewed. Much of his work today is centred on using technology and innovation to improve people’s financial wellbeing. In 2018, he co-founded CliQue Advisor – a financial advisory technology. This technology has received recognition and funding from Alberta Innovates and the National Research Council. Maurice is one of the first Canadians to sit on Intuit’s Accountant Council, speaks at engagements across Canada and the United States, and is often asked to share his ideas on disruption and innovation in the financial sector. Aside from work, Maurice has been married for 10 years and has a four-year-old daughter. 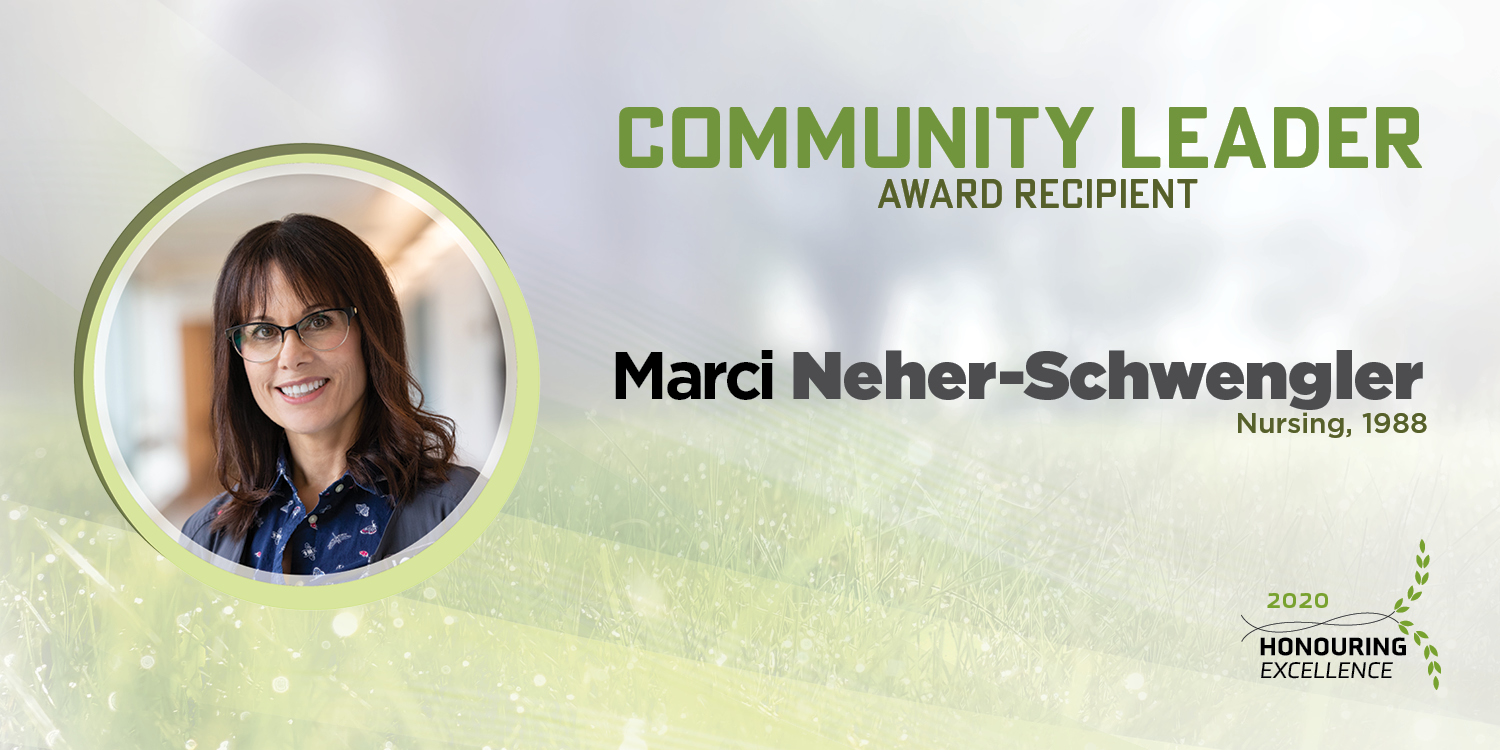 Marci Neher-Schwengler is the recipient of this year’s Community Leader award. Neher-Schwengler has committed to a personal nursing philosophy that nursing is more than just a career – it is a privilege taken upon by people who are passionate about using their knowledge and skills to help and advocate for those who are unable to help themselves. Kindness, empathy and a passion for life-long learning are the cornerstones.

Following her time at Lethbridge College, Neher-Schwengler earned both her Bachelor of Nursing and Master of Nursing from the University of Lethbridge. She has worked as a Registered Nurse for 30 years in a variety of roles, including bedside acute care nurse, advanced practice nurse and clinical educator. For the last three years, she has been manager of the Intensive Care Unit and Coronary Care Unit at Lethbridge’s Chinook Regional Hospital. Known for going above and beyond for her patients, Neher-Schwengler has built a sense of community in the hospital. She received an ARNET scholarship for her work on PTSD post-critical illness, and she was part of a group of Registered Nurses in her workplace awarded the AHS President’s Excellence award for their work on the prevention of delirium in the critical care setting. She continues to make her community a better place, as she has begun a new career educating the next generation of nurses as a clinical educator and lecturer at the University of Lethbridge. 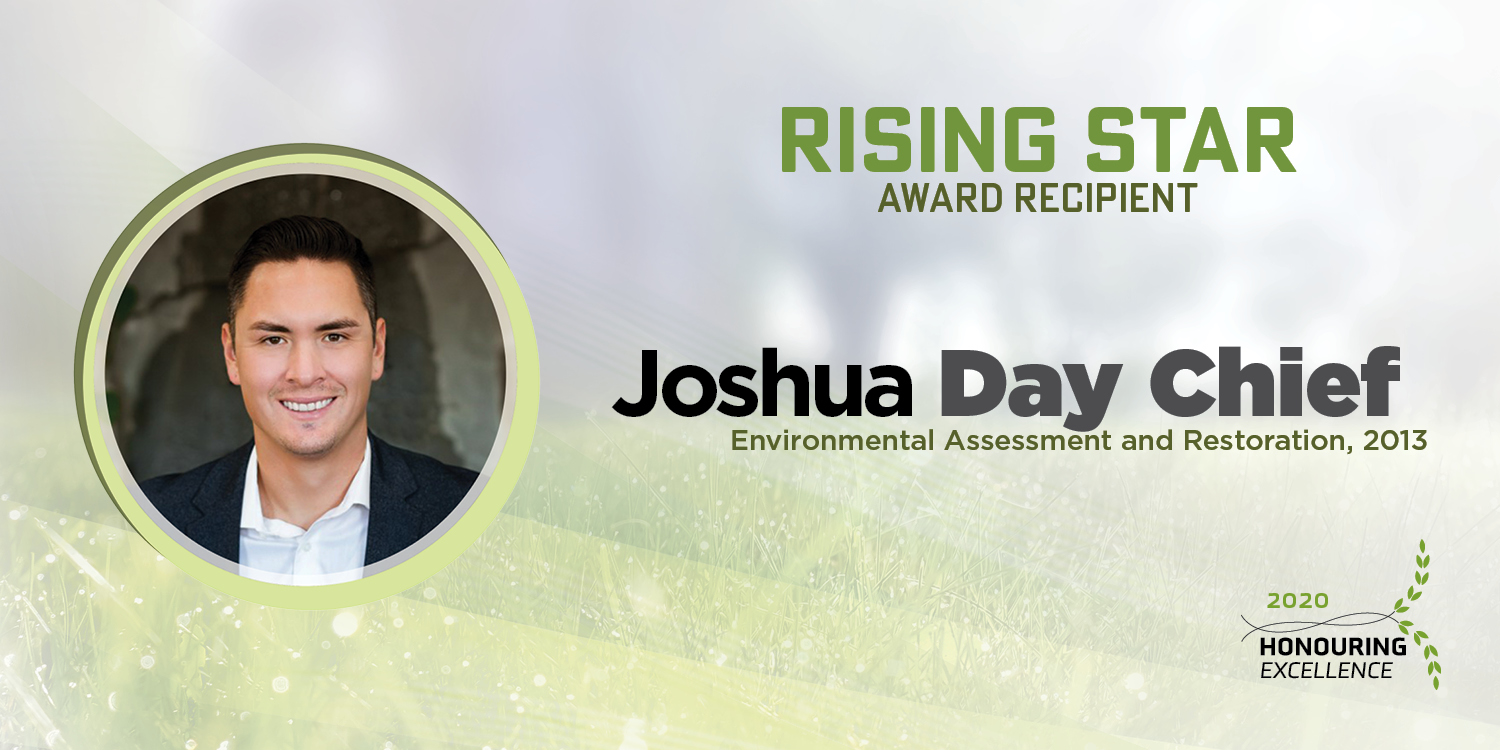 Joshua Day Chief is this year’s Rising Star award recipient. Just seven years after graduating from Lethbridge College, Day Chief is CEO of AdvancedAg Inc., a family-owned company focused on producing beneficial blends of bacteria for crop and soil health. Day Chief’s first steps into the industry in 2013 included working on research projects for Advanced Water Technologies (AWT), a company owned by his mother, Phyllis Day Chief, while also juggling a job in the environmental consulting world. AWT’s projects focused on using bacteria to naturally clean up lakes and stormwater ponds. Day Chief helped to double AWT’s client list in the first year, while also researching and marketing a bacteria-based product for agriculture, which helped to diversify and grow the company.

Day Chief enjoys the challenge of new opportunities and engages a team approach to drive projects. He’s a natural leader and his ability to share his vision with others allows them to buy-in to his projects. In 2017, AWT had applied bacteria to roughly 1,000 acres and added one new brew location, with farmers noting increased plant health and yield for their farms, while allowing them to cut back on harmful chemicals and synthetic fertilizers. With AWT still in operation, AdvancedAg Inc. was created the following year to meet the demand in the agriculture market. Investing in research, Day Chief’s team developed new technology and software to culture and grow their “bugs.” In 2020, AdvancedAg Inc. has 25 brew facilities across Canada and will treat close to 400,000 acres of crops, while maintaining a strong, growing client base for water restoration.