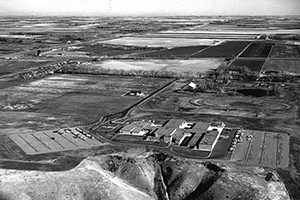 Before it was a college, it was a farm. And before it was a farm, it was the traditional territory of the Blackfoot people, the place where for more than 10,000 years the members of the Blood Tribe (Kainai) and its confederates the Peigans and the Siksika (Blackfoot) would hunt, fish and camp.

For as long as there have been residents of the western prairies, the land where Lethbridge College now sits has been a place of people coming together to live, learn and grow. It has been a constantly-evolving campus which got its start about four kilometres to the north in rented class space at a local high school and today encompasses more than a dozen buildings in the city of Lethbridge as well as two regional campuses.

A number of factors contributed to the creation of Canada’s first publicly-funded community college and its beautiful south side campus, including a growing population, the prosperity of post-war southern Alberta and especially the size and wealth of the city of Lethbridge. But one of the biggest concerns was the lack of post-secondary educational opportunities in the southern part of the province. Lethbridge’s population nearly doubled between 1946 and 1956, increasing from 16,522 residents to 29,462, and many of those new additions were children. However, the closest post-secondary institution was a 225-kilometer drive away in Calgary, leaving Lethbridge at risk of losing future generations (and its eventual workforce) to the bigger cities to the north.

The establishment of the college was described as an historic decision in the Lethbridge Herald, which stated: “South Alberta has passed a milestone. The eyes of the rest of the province and of educational authorities all over Canada will be upon us as we march boldly into territory which shows tremendous promise. …[W]e suspect South Alberta does not yet fully appreciate what these people (the organizers of the college) have done for it. But the time is fast approaching when leadership must be matched by community response. If it is, the Lethbridge Junior College can look forward to a great future.”

Thirty-eight students enrolled that fall and attended classes in space leased at Lethbridge Collegiate Institute. To distinguish the high school students from the first year college students, college students were called Miss or Mister, allowed to smoke in the student lounge on campus and used a separate entrance to the school. The first faculty members were asked to teach classes at both the high school and the college.

While the first classes got underway, the board started searching for a permanent site for the college. One of the sites considered was a property on the west bank on the Oldman River where the University of Lethbridge would eventually be built. The Lethbridge Herald advocated passionately for this site, writing “If Lethbridge is to grow as predicted it must have room to grow…Westward development would give the city a better balance. And a Lethbridge with a river running through it (instead of around it) could be an even more beautiful city than that we pride ourselves on today.”

According to a 1978 history of the college written by former journalism instructor Georgia G. Fooks, these were some of the same arguments that would be used – more successfully – a decade later when the newly established University of Lethbridge was looking for a site. In the late 1950s, however, the westside proposal was abandoned and the board returned to a site that had been proposed early on but rejected as it was considered too far out. The Whitney property was 80 acres of farmland that bordered the city’s gently rolling coulees; its owner, Frank Whitney, sold the property to the city at a reasonable price, and the campus finally had a home.

The first building constructed on campus opened in 1962 and was named after founder and first board chairperson Kate Andrews. It was designed by the architectural firm Lurie and Neufeld with a budget of $500,000. Next came the technical building to house the vocation and trades courses, which opened in 1963.

In 1964, a push began to open an autonomous university in southern Alberta, and with the July 1966 announcement approving the establishment of the University of Lethbridge, new questions and a bit of concern arose. How would it be organized? Would it be situated on the same campus as the college? What would happen to the college? In the end, after extensive, drawn-out debate, it was decided that the university would be built on the west side of Lethbridge, and that the college would separate its university section from its technical and vocational section.

During those tumultuous years, the college was working to get plans approved to build a science building, which would open in 1967 and be named for W.J. “Jim” Cousins, the college’s first dean (a role which later would be called president). It was designed by the same firm who designed the Andrews Building with a budget of $2 million. When the building was approved the Herald wrote: “The sparkling progress the building represented comes as a result of the enthusiasm and hard work of the Board of the Lethbridge College. They have every right to be delighted with this reward of their confidence and vision.”

The Cousins building opened in January 1967, the same month that the University of Lethbridge officially opened its doors. For the first few years, the university would operate at the same campus as the college.

At this time in its history, the college, which changed its name to Lethbridge Community College in 1969, used the creation of a university in the city as an opportunity to refine its mission and motivations. Up to that point, the main emphasis of the college had been university transfer programs while the technical and vocational programs had been incidental. After the separation, efforts went into developing a true community college concept with an emphasis on one- and two-year career programs that were designed to meet the needs of employers and industry in the southern Alberta region.

Other new additions to the campus came during the next decades, including the Paterson administrative building in 1970; the student facility known as “The Barn” in 1975; and the Cullen student residences in 1977. These residences are home to 232 students, including 136 in townhouses, 88 in two-bedroom suites and eight in family suites.

As the province grew and thrived, so did the college. A new Trades building opened in 1981; a technology wing was constructed in 1983; College Centre, which includes today’s heart of the college, Centre Core, opened in 1985; and the Val Matteotti Gymnasium and PE Building started operating in 1990.

The next addition to campus was the 30th Avenue residences, home to 208 students, which opened in 2001. The Instructional Building followed in 2002. The college celebrated its 50th anniversary in August 2007 and marked the milestone with another name change, this time to Lethbridge College. Three years later, Kodiak House residence opened, providing accommodations to 109 students, all in single rooms.

The newest building constructed on campus is a trades and technologies facility that anchors the south end of campus and has been built in two phases. The first phase, which opened in the fall of 2015, houses programs within the Crooks School of Transportation, including the Automotive Service Technician, Parts Technician and Agricultural and Heavy Equipment Technician programs. The second phase of that facility will open in 2017 and once complete, students in eight skilled trades and four technology programs will benefit from learning at what will be the largest trades and technologies training facility south of Calgary.

One important aspect of the stunning, sunny new trades facility is the centre corridor that runs through it. The wide, welcoming aisle will link directly to the older trades facility, the Andrews Building, Centre Core and the Technologies Building, and, without going outside, provide passageways to the Paterson Building, the Cousins Building and the PE Building and Val Matteotti Gymnasium. After 60 years, nearly the entire campus will be connected, a top educational facility born out of the southern Alberta ground.