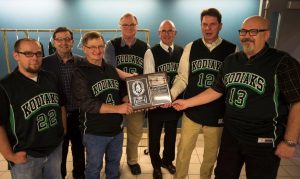 That’s what five of the remaining team members from Lethbridge College’s golden 1966-67 basketball team experienced this fall when they donned their old numbers (when possible) and took to the court during the men’s basketball home opener to be recognized for their induction into the Lethbridge Sports Hall of Fame during the special 30th annual ceremony last May.

Under the direction of then-coach Dr. Gary Bowie, that men’s team – alongside the successful women’s basketball team who competed as the Koalas – established the foundation for what has been more than a half century of outstanding basketball play at Lethbridge College.

“A winning tradition was established back in 1966-67 and it thrives today,” says Todd Caughlin, Manager of Athletics, Residence and Recreation Services. “What the 1966-67 Kodiaks and Koalas did created a foundation and opportunity for student athletes to pursue their educational and athletic dreams in southern Alberta. This team built a tradition!”

The 1966-67 team, including the son of Myron Eaves, who had passed away in August, handed their plaque over to the current team, saying they hoped it inspired future generations of athletes at Lethbridge College.

As the 1966-67 Kodiaks left the hardcourt, some of them paused and looked back, remembering what the poet Michael McFee called the “perfectly thoughtless motion of shot, rebound, dribble, shot.” They weren’t in any hurry to remove their jerseys.