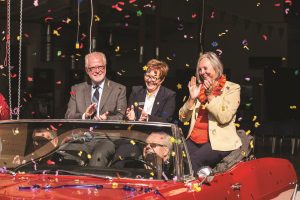 “This building leaves quite an impression when you see it for the first time,” says Lethbridge College President and CEO Dr. Paula Burns. “The most remarkable features are the modern learning spaces our students, staff and partners now have access to. Thank you to everyone who has worked so hard to date and to the tireless efforts of our campaign cabinet as we work towards our goal of raising $25 million in our Possibilities are Endless campaign.”

The 41,317-square-foot building – Phase 1 of a three-year construction project – houses programs within the Crooks School of Transportation, including the Automotive Service Technician, Parts Technician, and Agricultural and Heavy Equipment Technician programs. When the entire building project is complete in 2017, students in eight skilled trades and four technology programs will benefit from learning at what will be the largest trades and technologies training facility south of Calgary.

With more than 15 miles of in-floor heating pipe, 6.4 miles of IT cable and a roofline that mimics Lethbridge’s gently rolling coulees, the first phase of the trades and technologies building is maintaining a strong silver LEED rating as construction continues into the next phase.

“This building will positively change the future of the trades and technologies sector in our beautiful city and surrounding area and create a legacy of attainable higher education for years to come,” says Samantha Machacek, a student in the third-year of the automotive service technician program who spoke at the opening. “I look forward to returning here to continue my education and to learning in such an inspiring setting.”

The celebration continued well after the speeches ended. Instead of cutting a ribbon, the bright red 1966 Pontiac Parisienne that Ron and John Jacobson donated to the college emerged through smoke and waving flags to officially mark the opening. Then students, staff, friends of the college and community members devoured burgers while listening to live music and marveling at the burnout and driving demo by 2010 welding alum Rob Parsons.

It was all that was promised in the invitation – plenty of pistons, power, passion and a truly memorable party.

Between 1982 and 2015, Lethbridge College has admitted 9,329 apprentice students
in the following programs:

In addition, 2,289 students have been enrolled into the college trades programs between 1982 and 2015. These include students in the following programs:

A total of 11,618 students have enrolled in trades and apprenticeship programs during the last 33 years. And thanks to this new building, thousands more will be able to get their hands-on training at Lethbridge College.