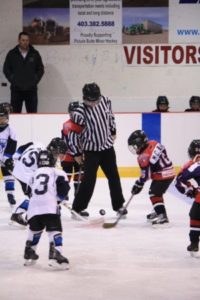 Francis Rankin is one of at least six people in the Lethbridge College community who spends his nights and weekends wearing the black and white stripes of a hockey referee. He and students Wyatt Griffin (Criminal Justice), Megan French (Massage Therapy), Justin Cameron (Nursing), Cole Nicholas (Criminal Justice) and Dax Eaglebear (Business) use their own hockey skills to make sure the rules of Canada’s game are followed, and that (hopefully) much fun is had by players of all ages.

Rankin, who has reffed hockey all over North America for 42 years, estimated he has officiated at more than 5,000 games in his life. Put another way, the

Nova Scotia-born man has spent more than 1.5 years of his life as a hockey referee. “To me it’s just my form of recreation – this is what I do,” he says. “It’s relaxing. You have to focus, It’s good exercise, but it’s not stressful.”

Rankin has been a referee for a grandparent, father and son in the same family and, even in Alberta, runs into people who remember Rankin being a referee more than 35 years earlier on the other side of the country. “You do it for stories like that,” he says.