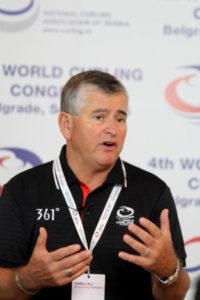 Darrell grew up in small-town Saskatchewan and spent a lot of time in a curling rink. His dad was on the volunteer board of the curling club and had a key to the rink. Over the years, he served as a volunteer in many curling clubs in Canada and Europe, including as icemaker and janitor. At the end of his 22-year service and after much contemplation, there were two new career choices he thought would be interesting: golf pro and curling club manager. While he felt he had the skills to be the janitor he didn’t feel he was ready to be a Curling Club Manager. But he was ready to learn the golf business. And so he enrolled at Lethbridge College.

Darrell completed the two-year program and was given the opportunity to apprentice at Paradise Canyon. In 1997, he applied for and got the GM position at the Lethbridge Curling Club. Darrell gained a respected reputation in both national and international curling circles and eventually scored what could be described as a dream job with the World Curling Federation as Competitions and Development officer. It’s a position that takes him all over the world, yet allows him to work out of his Lethbridge home.

From writing successful grant applications to public speaking and creating and presenting information to the 54 member World Curling countries, Darrell says that each and every one of the courses that were offered at Lethbridge College provided him with something that he has been able to use in his career since graduation. In particular he’d like to thank Alan Andron, Jay Buis, Cheryl Mehedan, Dean Spriddle, Thelma Coutts and the late Sheri Thomson for all their patience and guidance. Not bad for a kid who threw a lot of “rocks” at “houses.”

To read more interviews by Mark, visit his blog greetergrammer1.wordpress.com.