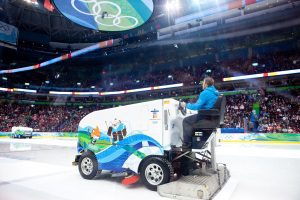 J.J. Straker has one of the hardest jobs in the NHL.

While he doesn’t have to stand in front of 160 km/hr slapshots, worry about body checks or try to contain Crosby, McDavid or Stamkos, Straker does have to keep the ice perfect in a city that is not the most ideal setting for hockey.

Straker, who is the head ice technician for the Arizona Coyotes, is up to the challenge.

“The building can handle the heat,” explains the 2005 graduate from the college’s Recreational Facility Operations program. “There are four large AC units – one in every quadrant of the building, and they can keep the building cool even on days it gets up to 115F. I am sure they have a hefty electric bill, but the building can stay cool.”

The problem is the humidity – usually (but not always) the lack of it. In a perfect hockey world, the humidity would be in the 40 to 44 per cent range. On many game days in Glendale, Arizona, a suburb of Phoenix, the humidity is in the single digits.

“So you have to keep adding moisture,” says Straker, who came to the college to play with the Prairie Baseball Academy and enroll in the Recreational Facility Management program. “You just keep flooding it, much more than someone who was working somewhere with good humidity would have to.”

And then, on the few occasions it does rain, there is too much moisture in the air. “It’s rare we have that sweet spot,” says Straker. “And we don’t have any dehumidifiers, so we are somewhat at Mother Nature’s mercy.”

Much like the hockey players, Straker worked his way up in the ice-keeping world, starting out taking care of the ice in small-town rinks in Alberta and British Columbia.

“My big break was when I was asked to volunteer at the Vancouver Olympics in 2010,” Straker says. “I was on the ice crew there and must have done good work because me and another guy drove the Olympias (ice resurfacers) for the gold medal game. The ice had to be perfect.”

After that experience, Straker continued to move around to different rinks that needed great ice. While he was in Beaumont, Alta., he got a call about the job in Arizona. “The guys from the NHL knew of me because of the Olympics, and they asked if this was something I’d be interested in.”

He was. And so the day after his honeymoon in the fall of 2013, Straker moved south to start work taking care of the ice in Arizona. His wife followed a few months after and their daughter was born a year later. The move has been a great one.

“The weather alone is awesome,” he says. “It has its challenges with being a non-traditional market. Hockey is nowhere near the top of the list of what people do here. We do have many diehards though, just nowhere near what I am used to anywhere at home. But I love every second of my work.”