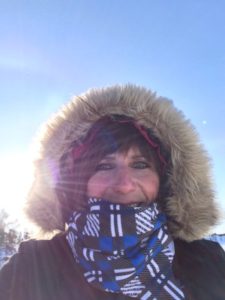 Lethbridge College Physical Education and Leadership Instructor Dawn Keith has been asked to teach basketball to players all over the country. But most invitations don’t come with the promise of seeing the Northern Lights or going out for a quick dog sled ride.

Keith has experienced both in the last two years, as she has travelled to the Northwest Territories to promote and develop basketball skills among primarily Aboriginal youth and help coaches in the territory that extends from the 60th parallel to the North Pole.

In November 2013, Keith travelled to Great Bear Lake by plane – the only way in or out of the community at that time of year.

“It was an education for me,” says Keith, who has taught 16 years at the college and coached basketball players at all levels, including at the college as well as provincially and nationally. “I spent a lot of time with the youth, who were working with two fantastic teachers. The interesting part is that most of them had never seen a woman coach basketball before. The guys were pretty skeptical until I started playing, and the girls found it very rewarding to connect with a female coach, I think.”

In February 2015, Keith was asked to come to Yellowknife, the capital of the territory that sits almost 2,000 kilometres due north of Lethbridge, to run another basketball clinic and help coaches identify athletes for the Aboriginal Games and the Western Canadian Games. She worked with athletes between the ages of 11 and 17 and was impressed by the support of their families and communities.

“It was a wonderful opportunity to take in some of the winter wonderland as well as provide coaching for club, provincial and community basketball programs,” she says.

While the days and nights were packed with practices, Keith did get the chance to experience some of the local culture, including a winter festival with extraordinary ice carvings, the opportunity to see the Northern Lights, and the thrilling experience of dashing along snowy trails of Great Slave Lake while driving a dog sled team.

But the most memorable part was working with the student athletes, whose determination to play and compete was inspiring. “It was nice to be able to give something back,” she says.

To learn more about athletics at Lethbridge College, go to gokodiaks.ca. For information about the college’s Physical Education and Leadership program, call 403.394.7338 or email generalstudies@lethbridgecollege.ca.