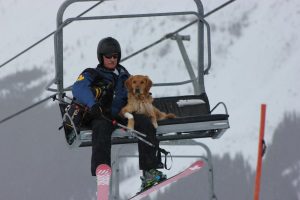 There’s nothing Dieter the dog likes better than playing hide and seek – especially the seeking. When he visited a Boy Scout troop in Lethbridge in October, he found all three hidden children lickity-split. His wagging tail communicates his delight in the game.

Dieter’s drive to find and his dogged dedication to the task at hand have been serving him well the last two years as he and his handler, Frank Lehniger, go through the rigorous Canadian Avalanche Rescue Dog Association (CARDA) training program. Dieter and Lehniger, who are based out of Castle Mountain, are well on their way to becoming a CARDA-validated team working and saving lives in western Canada.

Lehniger, who has taught in the college’s Heavy Equipment Technician program since 2007, has encountered a few more hurdles in the training program than the three-year-old Dieter. Lehniger was originally a snowboarder who started working as a ski patroller in Saskatchewan in 1997. When he came to Alberta, he continued patrolling on a snowboard at Castle Mountain. It was there he met ski patroller Daryl Lewko, who was training his first avalanche dog Avi, and after Avi’s retirement, Dieter’s father, Huck.

“I found out early on that being a snowboarder was too cumbersome and restrictive when working in avalanche terrain and with a dog,” says Lehniger. “So after boarding for over 20 years I had to learn to ski. That has held us back a bit. Handlers have to be a proficient back country skiers. We were at Revelstoke in 2014 for a week-long training and at the end they said to me: ‘The dog is not an issue – he’s probably one of the best around. You’re the issue. Your skiing is just not up to CARDA standard.’ They gave me until the end of the season to bring it up to their standard.”

Lehniger skied hard the rest of that season and in May went out again with a CARDA-assigned certified mountain guide and passed the test.

Since then, Lehniger and Dieter – who was named after Dieter Gerngross (Mr. Ski), a diehard Castle Mountain skier who was a staunch supporter of the hill until his passing in February of 2007 – have spent their weekends and winters training at Castle. Their work includes rides on the chair lifts (Dieter is a pro), practice being belayed by a rope and harness from the chair lift (in case of emergency or a malfunctioning lift) and lots and lots of “hide and seek.” Throughout the year, they also attend special training sessions offered by CARDA with the guidance of the RCMP and Parks Canada Mountain Safety Specialists. Lehniger also mentioned that he was very fortunate to be able to train with CAN-TF2 (Canada Task Force 2), one of Canada’s premier urban search and rescue teams.

Lehniger’s work at the college restricts his skiing and training schedule a bit, although he has taken on May and June apprenticeship classes to allow him time off in January and February. It’s a big commitment – in terms of time as well as finances. Dieter and Lehniger are one of the few volunteer teams training in western Canada; most teams include handlers who are full-time ski patrollers or certified mountain guides in the winter, which makes it easier to train and practice.

But it’s worth the effort. “It just seemed like the right thing to do,” says Lehniger who, with his wife Ruby, has been volunteering for most of their adult lives. “I actually do it for very selfish reasons. I really get a lot of joy out of helping people and you will meet some of the nicest people volunteering. Throw a dog into the mix – and it doesn’t get any better than that.”