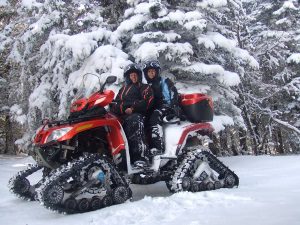 “The more it snowed, the more I hated it,” says Van Der Lee, the college’s food services supervisor.

“She would walk from the car into the house and that was it,” says her husband Allen Clampitt (Chef Training 1981), an instructor in the college’s Culinary Careers program.

But now Van Der Lee loves the coldest season. “Now,” she says with a laugh, “now I pray for snow.”

What caused the drastic turnaround for Van Der Lee was an invitation to come winter camping with a brother-in-law in 2010, and an offer from that brother-in-law to lend them a quad (or all-terrain vehicle) while they were out in the woods.

Van Der Lee says she “bundled in 60 layers of clothes,” went out and was immediately hooked. “My brother-in-law knew that area like the back of his hand and took us all over,” adds Clampitt.

The couple has become dedicated winter campers and quadders since that day. Last winter, they spent 52 days camping in their horse-trailer-turned-winter-cabin in the Porcupine Hills of Alberta. They say they count the breath-taking beauty, the wildlife, the friends and the companionship among the many reasons to ride.

“The animals we have seen are way too many to mention,” she says. “Fox, deer, coyote, moose, elk… we even saw a wolf take down a deer from a distance,” Clampitt adds.

They both appreciate heading out in fresh snow, where there is not a sound in the world.

In the early years, Van Der Lee and Clampitt rode a standard quad, but after getting stuck and having to shovel out of the snow one too many times, they have added tracks to their quad which help them stay on top of the snow. After a day outdoors, they head back to their small cabin dubbed the Winter Sugar Shack to warm up in front of a wood-burning stove, drink hot coffee, or build an outdoor fire and take in the beauty around them.

To book a table in the Garden Court Restaurant, which is run by Lethbridge College’s Culinary students, call 403-382-6999.