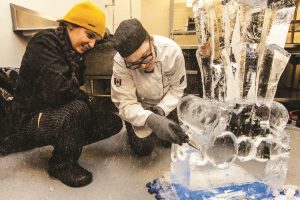 There are tools of every trade – and for Kristy Olsen and her classmates in the third year of their Culinary apprenticeship program, the tool of the day was a chainsaw.

“Growing up in a small town, I had handled chainsaws many times,” says Olsen, who is now sous chef at Browns Socialhouse West in Lethbridge. “The ones we got to use for ice sculpting, however, were a lot smaller and so much fun to use. You could actually get a lot of detail work done with them. One of the great things in the Culinary program is the amazing tools you get to play with – everything from bandsaws and chainsaws to fine delicate tools for creating edible flowers and carving fruit. It’s always a nice change when you get to put your French knife down and work with something out of the ordinary.”

Each spring for the last 20 years, Culinary students like Olsen have learned to turn ice into art as part of the Cold Kitchen/Pantry course in their program; the pieces are then used at special events around the city for the next year. In Olsen’s class, the carvings were used for the Lieutenant Governor of Alberta Arts Award ceremony, which was held in Lethbridge last June, as well as at the college’s Wine Auction in November.

Program chair Chef Doug Overes (Professional Cooking 1987, Distinguished Alumni 1992) says the college works with Frozen Memories out of Calgary on the annual assignment. The company, which is owned by Lee Ross, sends instructor Pascal Hinni to Lethbridge with carefully prepared blocks of ice to spend a day teaching the students how to shave, chip and chisel away the chilly material to turn a two-dimensional image into a three-dimensional delight.

“I was incredibly excited for this assignment,” Olsen recalls. “What you can do with a simple cube is endless. To be able to see an image and work backwards in creating it… it’s like a puzzle that slowly changes the more you work at it.”

To learn more about the Culinary Careers program at Lethbridge College, call 403.320.3245 or email culinary@lethbridgecollege.ca.