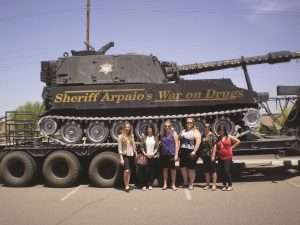 Student Brittany Menzies says initially she didn’t think they would learn anything too shocking as Canada and the United States have such similar cultures. But “when we got to actually take a look at how each of the prisons was run, the treatment of offenders, as well as the effective and ineffective procedures they have that differ from Canada’s, in general, it was very eye opening,” she says.

Other students on the trip included Kayla Bird, Naryis Cuellar, Jessica Mayen, Jessica Olson, Kaela Payne, and Michele Read. Many of them noted that seeing the differences firsthand was a key learning tool in completing their comparative justice course. “I gained more knowledge and more insight by actually being there and getting to experience and speak to people who work in corrections and in the justice system and learned so much more than I would just reading about it,” says Mayen.

Payne appreciated the in-depth look into how the corrections field works and the additional learning benefits of the live classroom. “This trip assisted me in realizing I am on the right career path,” she says.

Bird adds she has a new, positive outlook on Lethbridge College and the learning opportunities it provides. “It proves how they go the extra mile for their students to succeed and explore new ideas,” she says. “You get a whole new respect for the college and especially for the instructors who push it over the limits for their students.”