Thomas Kuperus (Corrections ’10) wanted to see Africa, glean a greater cultural awareness and do some good along the way. 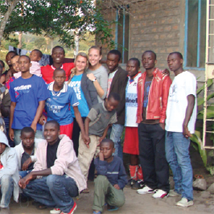 The third-year Correctional Studies applied-degree student from Coaldale spent four months in Tanzania last summer teaching, building and nurturing. He can’t wait to get back.

Wider Horizons: Where, exactly, were you in Tanzania?

Thomas Kuperus: In a small village outside Arusha, where the Rwandan war crimes trials are being held. [Population: 1.2 million, a touch below the Equator in northern Tanzania.] I spent a month teaching English, and the rest of the time working in a centre for street children called Children for Children’s Future. The children there were aged 9-19. I volunteered through International Volunteer HQ [an overseas volunteer placement service] for the first three months and the last month I was on my own.

WH: Describe the situation and the conditions.

TK: I actually lived in the orphanage, and was the first volunteer to do so in a long time, which helped me create a bond with the kids. The shelter had been started by a German tourist, but had fallen into disarray. They had a limited amount of blankets and the mattresses were in very bad shape, so we replaced them. The kids had been burning their beds for firewood so they would be able to cook their food, so we bought many months’ supply of fire wood. The school books were locked up, so we liberated them. The kids were eager learners. You would never imagine that these kids had been living on the street for up to two years of their lives. They were so well behaved and all had such a passion to learn and build a better life for themselves. Most were escapees from abuse at home and didn’t want to leave the centre. We did home visits. I remember taking two brothers to their home. They spent two days there before coming back. They hadn’t eaten the entire time, even though their mother was there.

TK: I loved it. People are so friendly and open there. I expected more of a culture shock. I faced a greater culture shock coming home than I did going there. I once traveled in Europe and wanted to come home every day; in Tanzania, I had to force myself to get on the bus to leave. Katie Nord [an American nurse] and I fixed up the shelter and gave the children a better place to live. We helped build a chicken coop and bought chicks for it. I used a lot of my resources, but it was all worth it.

WH: What would your circle of friends think of Tanzania and your experiences there?

TK: So many people here think of Africa as one big war-torn country. It’s not. Tanzania is a democracy. It’s poor, but it’s poor in a different kind of way; they’re together.[Some 36 per cent of the population live below the poverty line; Tanzania is in the bottom 10 per cent of the world’s economies.] It would be a real eye-opener for most Canadians. We worry about the things we don’t have, but they have nothing. I was the same way until I went there. Now, I think about buying a coffee out, and I think ‘why? I can make one at home.’ On one of our home visits, to a reasonably well-constructed one room house, there was no furniture. A grandmother was sitting on a concrete floor because there were no chairs, she could not walk. The family slept on the floor in their clothes. The house was full of smoke from cooking.

TK: The fourth year of the Corrections degree program is a field placement. I’d like to spend that year in Tanzania working with an agency. ‘Corrections,’ after all, means correcting behaviour. I’d love to start a non-profit organization to keep helping children there. I’m working at the Foothills Treatment Centre in Fort Macleod [addictions treatment]. And I hope to do a lot of fundraising before I go back.

WH: You have some pretty special memories from your summer. Any unusual ones stand out?

TK: A group of volunteers and I went to a small village and were treated as special guests. They slaughtered a goat in front of us to honour our visit, and we had to eat the meat raw. It didn’t taste bad, but you didn’t want to see how it was prepared. We were also burned [shows circular, quarter-sized burn mark on forearm] as a sign of friendship. A mother of one of the residents at the centre had a baby just before I left. Katie contacted me and told me his mother had named the baby Tom, after me. That was special.

I will always treasure in my heart the time spent with the kids; they are an inspiration to me. Soon after I moved to the centre, I adopted each one of them as a brother, sister or child.