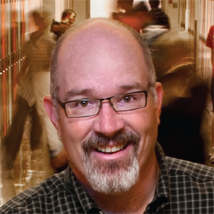 Slightly older at 24 than most rookies, the result of taking, as he calls it, “the scenic route” through the University of Alberta, he found teaching positions were difficult to come by in 1989. But it’s not always what you know, but who, and when a friend (Dean Johnson (Electronics Technology ’85) in Lethbridge College’s IT department) tipped him to a summer school gig teaching Social Studies 20, Bartlett responded with fervour.

“I dropped off my application immediately,” he says, relaxing for a moment in his new office as principal of Lethbridge Collegiate Institute and reflecting on that first day so long ago.

Summer school, the penal colony for recalcitrant scholars who frittered away their time between September and June, was, in those days, taught at Lethbridge College. Attendance was mandatory; slackers were under threat of repeating the previous year. Lethbridge College, normally a pleasant place of learning and endeavour, was, for those teens doomed to repeat a subject, a six-week sentence at hard labour.

And there stood Bartlett, charged with pushing, against the inertia of July and August, a roomful of the thrilled-and-delighted-to-be-here through the French Revolution. There must have been days when his visions of tumbrels carting the unfortunate to the guillotine in Paris contained, among the condemned, more than one or two Lethbridge high school students.

“There were some kids who ate it up and some who challenged it,” says Bartlett of the curriculum. “Some were keen academically and some found it a painful experience.”

But for Bartlett, it was a beginning. Out of the ashes of European history, he furnished a teaching career now spanning 21 years and counting. A second year of summer school eventually led to a full-time Lethbridge classroom, a nine-year stint as principal at Dr. Gerald B. Probe Elementary, and, this past September, the school district’s premiere position as headmaster at LCI.

Robespierre and a paycheque, too. Before that Lethbridge College classroom, Bartlett worked for CP Rail, built grain silos and put in time at Who’s On Third, the city’s trendy bar of the day.

“I have a lot of appreciation for that summer job,” he says. “I was green. I had to teach a three-hour social studies class five days a week. It required me to adapt and change my teaching style. And, of course, it supported me financially.”

It also provided Bartlett a first taste of the mind-numbing drone of faculty meetings, something he’s tried to avoid in his time as an educational administrator.

Bartlett was born in Grande Prairie, but moved with his family to Lethbridge as a toddler. He attended Winston Churchill High School where his textbooks came second to sports (“My sister covered academics for both of us”), blew out his knee playing hockey, and developed friendships on the other side of the tracks at LCI.

After several years at Gilbert Paterson Middle School, Bartlett took over the top spot at Probe, serving as principal for nine years before the job opened suddenly at LCI last June. In a bittersweet finish, he had wished students and staff a pleasant summer vacation on the last day of the 2009-10 year, still awaiting word on his application at LCI. Word came at noon, moments after Probe had emptied for the summer.

“I was thrilled and delighted beyond belief, but I got a little emotional when I realized what I would miss. I realized I hadn’t had the chance to put on the final cap at Probe, and I had to get my head around what a high school would look like. It was like pulling off a Band-aid.”

The cut has healed; he’s found his pace at LCI.

“Kids are kids,” he says of the difference in student age between elementary and high school. “They might have different issues, but there are many similarities.”

He’s amazed at the information high school students amass on post-secondary and career possibilities, drilling down to glean the information they require to make informed choices. He also recognizes LCI is preparing students to develop a lifestyle, not to merely be earners, but to match their interests and skills with careers.

“They have the choice of university, college or the workforce,” says Bartlett. “All three are admirable choices.”

Still, he wonders if his students are in touch with themselves enough to make crucial life decisions at 18.

“It’s hard to make those choices at that age,” he says. “We try to provide them with opportunities so they have a better handle on the avenues open to them upon graduation. My biggest fear in life was to be stuck in a job I didn’t like. We try to steer these kids into something they’ll enjoy.

“It’s not a ‘one-size-fits-all’ situation. We have high-academic students, students who excel in fine arts and athletics, and students with disabilities. We have to cater to all of them.”