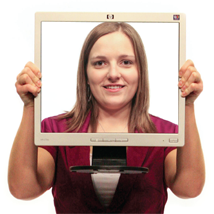 As a new Lethbridge College employee, Susan Roberts (left) is spending a lot of her time on Facebook. As the institution’s first e-recruiter, she’s paid to.

Like any other business, Lethbridge College realizes it must cast its hook where the customers – potential students - are biting. Lately, there are fewer fish, more hooks and a much larger pond.

It used to be much easier. There was a time when Lethbridge College, in order to attract high school students to its programs, sent a recruiting team to their classrooms and gymnasiums, passed out view books and brochures and wowed them with tales of the great careers they could have upon graduating.

Today’s teens live in another time at another address. While the college still graduates them into great careers, the lure to get them on campus has had to change to fit the times. They’ll still meet Lethbridge College recruiters, see billboards, hear radio ads and be able to thumb through view books. But they’ll also find college information on Facebook, Twitter and YouTube.

If they’re using social media, so, too, must Lethbridge College.

“A lot of other institutions are there now,” says Roberts. “Most have some presence in social media to keep students updated. We’re using it in collaboration with traditional recruiting methods, using the personal stories students share to reach a wider audience.”

“Our presence must be consistent, engaging and authentic,” says Buis. “Otherwise, it’s like having a phone number no one is answering. Social media is as viable for communicating with our customers as email, phone or fax.”

Buis notes the college has long been on Facebook, and is a relatively recent convert to Twitter.

“People on Twitter believe everyone should be there,” says Buis. “We could have used it to handle our last ‘snow day’ more efficiently.”

She’s referring to a blizzard last winter that shut down the campus, cancelling classes and sending most employees home after they had struggled to work. A quick “tweet” to all students and staff would have saved everyone the trip. Most older employees took it in stride, but some younger students were aghast they hadn’t received an electronic note.

Of course, Twitter, with its staccato 140-character limit, cannot provide much background or details to potential students regarding programs. And social media is, in fact, far from social for those who still enjoy face-to-face human interaction. Still, its short bursts can whet young appetites. It’s information for an attention-deficiency age.

“It does present a challenge,” says Buis. “It’s not built for complex, detailed communication. But it makes students comfortable. It takes down walls and puts us in places where students are, where they can respond to us.”

Social media, too, allows for a greater interaction with students in Lethbridge, an important consideration when the majority live off campus.

“When you’re a commuter campus as we are, you need something in place to build a sense of ‘community’ to increase retention,” says Buis. “Twitter and Facebook allow us to build that community. Students can have a sense of ‘campus’ even after they go home for the day. We feed the soul in different ways.”

Social media provides potential students with what Roberts terms “touch points,” opportunities for them to communicate comfortably with the college. Those “touch points” become “jumping points” from which they can delve deeper into facets of the college.

“We can give them all the contact information and encourage them to drill deeper,” she says.

Interestingly, despite the gimmickry, Roberts says the human story is still the best way to influence decisions. A friend’s positive comments on Lethbridge College have a more powerful effect than any other form of advertising.

“The use of social media is growing and evolving as we investigate how best to use it,” says Roberts, who holds degrees in geography and marketing from the University of Lethbridge. “We’re learning, too. Our goal is to build awareness of Lethbridge College and its specific programs.”

This new outreach is not limited to young techmeisters like Roberts. Tracy Edwards, Lethbridge College’s president, has a presence on both. At the start of the academic year, Edwards noticed a concern from a student posted on Facebook, and took the time to respond personally. The student indicated his amazement that the college president would take the time to answer him.