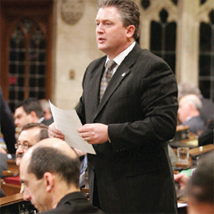 diploma comes in handy in his new life in Ottawa.

It’s a bit of a distance from working on fisheries experiments in Alberta to sitting in the House of Commons in Ottawa. I guess, however, both encapsulate my lifelong passion for the outdoors and my interest, since 1996, in federal politics.

I was born in 1968 in Lacombe and raised on a farm, the oldest of three. After graduating from high school in 1986, I earned a bachelor of science with a specialization in zoology from the University of Alberta. During the summers, I worked as a fishing guide on Great Bear Lake; after graduation, I took a summer job with Alberta Fish and Wildlife as a fisheries technician collecting data for walleye and sport fishing stocks.

In high school, I wanted to be a fish and wildlife officer, so after the experiment wound down, I headed to Lethbridge College and enrolled in the Conservation Enforcement program. Because I had already earned a science degree, I was able to complete the program in a single year. But what a year! I did nine courses the first semester and eight in the second; thankfully I started in January and had a summer break in between. It was intense, but a great experience. The program was very practical and hands-on. Everything we learned could be implemented in the field; I saw a direct correlation between the material and the experience.

During the summer of 1994, I worked as a park ranger at Miquelon Lake Provincial Park, then in 1995 as a park warden in Jasper National Park before returning to Alberta Parks at Jarvis Bay/Sylvan Lake in 1996.

This was summer work only. In the winters, I worked on service rigs in the oilfield. I married Barbara in 1997, while I was the ranger-in-charge at Red Lodge Provincial Park. When our first child came along the next year, I realized I needed a career change.

I obtained a diploma in computer systems technology from Red Deer College in 1999 and stayed on at Agriculture Financial Services Corporation in Lacombe. From 2001 to 2006, I taught at Red Deer College.

I had been a public servant in one form or another, including a time as a Lacombe town councillor, and I was concerned with how tax money was being spent. Preston Manning was leader of the Reform Party when I bought a membership in 1996. I got involved in party governance and, as they say, the rest is history.

When Reform amalgamated with the Progressive Conservatives, I was asked to run in the Wetaskiwin riding and was lucky enough to win the confidence and trust of the electorate in 2006. [Calkins was re-elected in 2008.]

I sit on the Environment and Sustainable Development and the Fisheries and Oceans standing committees, on both of which I utilize my experience and knowledge from Lethbridge College and my interest in fishing. I’m particularly interested in water quality, and my background allows me to ask solid questions.

I live in Lacombe, Alberta’s 17th city, and rent an apartment in Ottawa. A week in Ottawa can be described as one big day with four naps. When I get up at 6 a.m., my BlackBerry is already buzzing. And coming from Alberta, I have to fight a two-hour time change. Still, it’s a heady experience being able to influence policy that develops the nation.

Barbara and I have three children: Eryk, 12; Kasandra, 10 and Krystian, 8. When Eryk was born, I was teaching and we made the decision to get by on a single income so Barbara could be at home with the children. I was amazed at how difficult it was to make ends meet. The single-income family was not respected; that was a motivating factor for getting into politics.

In the end, I’m still a husband and father first. I wouldn’t sacrifice that for anything.