Southern Albertans are a deprived bunch when it comes to choices in potato varieties. 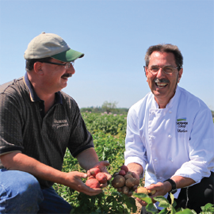 They have for years been eating the equivalent of plonk wine slurped from a plastic cup.

As it turns out, potato connoisseurs consider the ubiquitous Russet Norkotah, served baked in finer restaurants throughout the region, to be on a par with screw-top popskull.

But if the Potato Growers of Alberta (PGA) succeeds in its latest endeavour, all manner of varieties, tastes and textures may soon be available to kitchens everywhere. Imagine slicing into a Mozart, Orchestra, Charlotte, Nicola or Innovator, releasing a bouquet heretofore unknown to local palettes, each one, with the right knowledge, paired with a particular meal, just like the wine that accompanies it.

And Lethbridge College’s Culinary Careers program will have played a hand in its success.

On 200 acres at the Lethbridge Research Station, the PGA has been nurturing 36 varieties sent from northern Alberta, a traditional area for seed potato production. The majority of these are shipped to growers in the United States and Mexico, leaving local consumers with what Jeff Bronsch, the PGA’s technical director, considers the dregs of the potato world.

“The Russet Norkotah is well known in the industry as not being the best tasting,” says Bronsch, who has been overseeing the test plot. “It has the consistency suppliers and restaurants desire [those you store for a year will taste exactly as those freshly dug], but the reason you put sour cream and bacon bits on them is so you can eat them.”

Several months ago, the PGA dug nine varieties for experimentation, and brought them to Culinary Careers. At a special luncheon, college chefs served the spuds to more than 60 industry insiders and explained to the diners what they thought of the results.

“We know there’s far better-tasting varieties out there that consumers, who want something better, have never heard of,” says Bronsch (Agricultural Technology ’88). “Our idea was to get the college’s culinary program involved to have its chefs prepare dishes and see what they thought.

The results were favourable.

“We loved them,” says Charles Parker, program leader for Culinary Careers, who actually helped dig the potatoes. “We used red, white and yellow varieties. The textures were firm and flavour quality was high.”

The feedback from college chefs was important, says Bronsch, to the PGA’s effort in convincing suppliers to carry more varieties. If consumers start demanding better than what they’ve been traditionally served, restaurants may begin offering them.

In Lethbridge, the Red Dog Diner is an example, says Bronsch. The diner approached the PGA looking for a suitable red variety for its poutine. Reds have a higher moisture content, which steams out and is replaced by whatever it’s cooked in. Manufactured french fries, on the other hand, are cut from varieties such as the Russet Burbank, which is dry and does not absorb oil as readily.

After the lunch at the college’s Garden Court Restaurant, guests were buzzing.

“Charles and the team did a fantastic job,” says Bronsch. People are still talking about the dishes. “We did well with nine varieties. Now, we’d like to see what we can do with all 36.”

And one day, diners may one day ask their wait staff to see a potato list, and select that “audacious little Mozart” to go with their meal.