Scott Lehbauer is a one-man team. 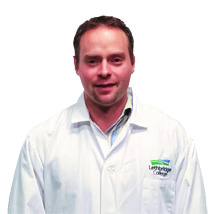 He has perhaps the largest collection of name tags on campus.

Since beginning his career at Lethbridge College as a science lab assistant in 2001, Scott has served as a science lab technician, science lab co-ordinator, part- and full-time instructor, and member of the college’s board of governors, serving first as the representative of the Alberta Union of Provincial Employees for three years and now as a faculty rep.

Oh, he also coached the Kodiaks men’s volleyball team and was a key player in the retrofitting of the Cousins Science Centre.

In September, Lehbauer became co-chair of the School of Developmental Education, which includes Lethbridge College’s upgrading program, and is still teaching anatomy/physiology and the physiology of aging. The college has experienced a 500 per cent increase in anatomy students from two years ago, who now number about 360 per semester, including learners from nursing, exercise science and general studies. This keeps him busy, which is good because Lehbauer, as a lifelong learner, is constantly in motion.

Now in administration, he continues to hold a passion for teaching.

“During the three years when I taught full time, it was fun to come to work every day,” he says. “No matter how a day went, there was always something positive in it. The students were incredible.”

Among Lehbauer’s joys was the ability to enable students to learn, using a blend of technology and hands-on instruction. This month, he’s launching an iPod touch learning pilot in which 40 anatomy students, chosen at random, will be given the devices loaded with apps, lab videos and narration, giving them access to a wealth of information, including the ability to watch a virtual human dissection. They’ll have access to information around the clock.

The accomplishments of those 40 students will be measured against those who are not part of the project; the results will determine the success of the initiative.

“These are exciting times to be a teacher,” says Lehbauer. “The blackboard-and-chalk days are over. You can continually reinvent yourself as an instructor to enhance the outcomes for students. Use of technology and hands-on experience is what students crave.”

When the dollars are available, Lehbauer would like to implement the project with iPads. For now, he uses one as a demonstration tool.

“It’s a non-traditional enhancement for a traditional lab setting,” he says. “Although, technology will never fully replace hands-on labs, which are crucial to learning.”

He was good enough on the court to earn a scholarship to the University of Victoria, where, in three years, he earned a biology degree. (“It was time to get serious.”)

He started a “career” as a tree planter in northern British Columbia near Chetwynd and Williams Lake. The money was large, but the bugs and bears were even larger. After a brief gig as a temporary lab assistant at Lethbridge College, he headed back into the trees; when the college offered permanent work, he saw the forest.

It was a difficult transition time at Lethbridge College. Lehbauer’s mentor here, Kelly Oikawa, was pressed into a teaching role upon the sudden death of popular instructor Mike Peterson, opening the door for Lehbauer to take Oikawa’s lab tech spot. He soon thrived in the position and, when the Cousins Building was being renovated into the Cousins Science Centre, Lehbauer was called upon to serve as liaison between the science faculty and the administration responsible for turning it into a research-grade facility.

As described by Wider Horizons (Winter 2007), Lehbauer was bankrolled with more than $1 million and sent forth to purchase cutting-edge equipment to maintain its 13 labs at the top of the science game for years to come.

“It was a cool role to play,” recalls Lehbauer. “Karen Barnes (then dean of Arts and Sciences) wanted everyone involved, so I served as the go-between with faculty, administration and the architects.”

Although Lehbauer found a career in southern Alberta, he found his wife, Kristine, on Vancouver Island. They were married in 2002 in Cowichan Bay Aug. 24, returned to Lethbridge Aug. 30 and he began coaching volleyball Sept. 1. Kristine, who taught at Wilson Middle School before moving to Chinook High School, is a solid triathlete; Scott has recently struggled with his golf game, watching his handicap balloon to one.

The couple has two daughters: Victoria, 7, and Addison, 5. Victoria (“Tori,” to her friends; “Victoria” for publicity purposes) is in Grade 2, where she and her classmates use the Smartboard and iPod touch as learning tools.

“And they will never know any different,” says Lehbauer in some amazement. “I can’t imagine what devices and technology my grandchildren will be using.” Lifelong learning goes on. This month, Lehbauer begins a master’s of science in human anatomy/physiology instruction through a New York school, while testing his skills in his role as co-chair of Developing Education. His experience on the college’s board of governors has shown him the big picture, allowing him the perspective and context he needs to continue to be innovative.

Hopefully, somewhere in all of this, he can recapture his golf game.