Phil Harttrup can’t seem to keep his feet on the ground these days. As director of Lethbridge College’s 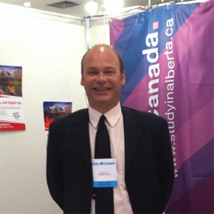 English Language Centre, his passport bears customs stamps from a host of countries Lethbridge College has targeted as potential recruitment hot spots. Students from South America to Asia are looking for overseas educational experiences, and Harttrup is hoping they’ll one day follow him back to southern Alberta.

Brazil has already proven to be a promising market. On a recent trip to Sao Paulo, Harttrup, armed with college marketing material, found solid interest in Lethbridge College’s Business Administration and Fashion Design and Marketing programs.

“You never know for sure when you’re on one of these trips, how they’ll turn out,” says Harttrup. “It’s not like turning on a light switch. But I believe if we focus our efforts in three or four areas, we’ll begin to see solid results in a few years.”

On Lethbridge College’s foray into Brazil, it partnered with Advanced Education and Technology, the University of Lethbridge and Calgary’s Bow Valley College, hitting student career fairs and making school visits.

Rather than merely attracting students to its English as a Second Language (ESL) program, the college’s new focus is on drawing learners directly into its academic programs. An advanced ESL course prepares them to transfer into those programs, and allows the college to offer overseas students letters of conditional acceptance, a real selling feature today. A secondary benefit: students often stay in southern Alberta, adding their expertise to the economy and their diversity to the culture.

Another key area in Asia is Japan. Lethbridge College has long enjoyed warm relations with several institutions there, including the Nippon Institute of Technology, which sends students for two years to improve their English, learn about Canadian culture and, often, stay to take college programs. Last fall, the campus welcomed 20 students from Kansai Gaidai University, a progressive school in Osaka, which sends students around the world. Harttrup has developed contacts in other Japanese cities.

“The federal and provincial governments are working hard to promote international students coming here,” says Harttrup. “When we visit a city, we are invited to Canadian embassies and consulates, which help us with getting the word out. Student turnouts to career fairs are huge.”

Few areas of the globe are off Harttrup’s radar. Lethbridge College is considering attending career fairs in countries as diverse as Turkey and the Czech Republic. And, too, there are ex-pats and people in Canadian diplomatic service and the Armed Forces who are looking for Canadian colleges for their children.

“Another area I think we need to attack is the West Indies,” he says. “Countries such as Trinidad and Tobago, Jamaica and Barbados all speak English and studying in Canada is a big deal for them.”

The main competition for students in these island nations comes from post-secondary institutions in Toronto, Montreal and regions with coastlines, primarily Atlantic Canada. Still, many students are eager to learn trades, something in which Lethbridge College excels.

“If we can sell our trades programs to them, it really differentiates us from universities,” says Harttrup. “You can’t go to university and earn a diploma as a wind turbine technician, in golf management or fashion design. A lot of these kids don’t know exactly what they want to study, but they know they want to do it overseas. We tell them, ‘look, after two years at Lethbridge College you will have a diploma you can use to gain employment, or use it to transfer to another institution.”

Lethbridge College now has an International Planning Committee, of which Harttrup is a member. The IPC wants to see the college compete for offshore students at the same level as other post-secondary schools with larger war chests. Some institutions, for instance, have two recruiters traveling the globe for several months of the year. The IPC would like to see the college pick a few main target areas and establish bonds with them during a five-year period.

Closer to home, California is a potential hunting ground. With its massive wind-power industry, it requires technicians who could be trained to a world standard at Lethbridge College.

India and Saudi Arabia are also pins on Harttrup’s world map; he narrowly missed out on a trip to the Middle East last autumn. All this travel is creating diverse work for Lethbridge College’s Marketing Department, charged with translating materials into, so far, Spanish, Portuguese, Arabic, Japanese and Chinese.

If Harttrup’s success continues, a linguist might be a wise addition to the Marketing team.