Elsewhere, it’s a typical Monday night in Lethbridge: by 11 p.m. most residents are ending their day to the 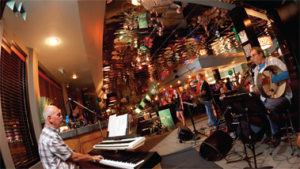 dying murmur of traffic outside. But across the city inside a quaint little pub, a boisterous crowd is far from sleep in a separate world entirely.

Three present and former Lethbridge College instructors are filling the air with unmistakable Celtic rhythm, and the crowd, many of them students, let the music seep into their veins and take them over. Soon, the occupants of this lively space have reached the peak of excitement; performing a jig so full of energy it rattles the walls.

This night, the terms student and instructor don’t exist; there are only friends here, and this is one evening they’ll recall for years to come as one of their best at Lethbridge College.

In their spare time, these friends enjoy playing music together. The band was formed in 1998, when Hepher and Kavanagh discovered their mutual love for Celtic music. A few years and line-up changes later, Burke joined to complete what is Glencoulee, well-known at music festivals around the province, and by students who always catch their performances in Lethbridge.

But, in order to accurately describe their camaraderie as a band and everything that encompasses, it’s necessary to look at each member individually to find out how their experiences have allowed them to bring their own unique style to the group.

“I always figured it was a great way to connect with students who got the chance to see another side of us. ” Richard Burke

Let’s begin with Kavanagh, who handles much of the vocal work. Long before becoming the go-to guy for the Communication Arts program, Kavanagh grew up in Montreal, where he attributes his musical roots and where he discovered his love for the genre.

“My buddies were into the Beatles and the Stones,” says Kavanagh. “I somehow heard Celtic music and it made an immediate connection with me; the jigs and reels really caught my attention. I also loved the instruments involved.”

Kavanagh worked in daily newspapers for several years before coming to the college in the mid-80s. During that time, he began playing music at seniors residences; something Kavanagh still enjoys.

“One gig led to another and then another,” he says. “Thirty years later, I’m still doing it three or four times a month.”

Along with guitar, Kavanagh also plays the bodhran, a unique handheld drum originating in Ireland.

“I’ve always loved the heartbeat sound that the bodhran provides,” says Kavanagh. “I’ve been playing it the last 10 years and I love its sound even more.”

Kavanagh has collected bodhrans from Ireland and Scotland, but he says his favourite makes come from Calgary. His bandmates tease him about his extensive collection.

“Ian says I have BAD which he says means ‘bodhran acquisition disorder.’”

Hepher is a Vancouver native, but has spent most of his life in Alberta. He gained knowledge of different types of music through family, and, like Kavanagh, preferred alternatives to the popular music of the time.

“My own interests were in folk music rather than rock and roll, although I like that, too, and there were some fine Irish musicians in the folk movement.”

Hepher worked in the corrections field for two decades, spending eight of those years at the Lethbridge Correctional Centre. He began working at the college in 1987.

“I just decided I wanted to do something different [and] wanted to stay in Lethbridge,” says Hepher. “I really liked the idea of being a teacher.”

Hepher has learned to play many instruments, including guitar, mandolin, dulcimer, whistles, harmonica and kazoo.

“I’ve always been interested in trying new instruments, so when I had the opportunity to acquire something, I have done it,” notes Hepher. “Some of them haven’t worked out, such as the uillean pipes [the national bagpipes of Ireland], and I’m still working on others such as the ukulele. The biggest thrill I get is playing the octave mandolin which my son Robin made.”

And then there’s Richrd Burke, the “retired” one.

These days, Burke can be found soaking in the benefits of retirement, fly-fishing and gardening to his heart’s content. The Calgary native become an instructor at the college in the early 1980s following a 15-year career in journalism.

Burke began playing piano at six, followed by guitar at 12. When he went into journalism at California State University, his musical opportunities broadened and he played in several bands.

“I would find the music department practice rooms and play because I didn’t have a piano at my apartment.”

Burke plays keyboard and 12-string guitar. As for other contributions, “I’m one of three band members who love to play and occasionally drink beer.”

Glencoulee has produced three albums: The Rare Old Stuff, Meeting of the Waters and Glencoulee: Live at The Empress (recorded at the Empress Theatre in Fort Macleod). The band agrees the live album was most interesting to work on.

“It was great fun, but it was intense,” says Kavanagh. “I think playing in the Empress was also a special treat. It’s a unique theatre with a lovely, warm atmosphere.”

“The audience was awesome,” adds Burke. “The production was difficult, but not as grinding as the studio work we did on the other two.”

The members say their music has allowed them to travel and share experiences they’ll never forget.

“We’ve done weddings outdoors under the stars where our music soared as the newlyweds danced,” says Kavanagh. “This past summer, we had a blast at Canada Day and it seemed that the thousand people there did too, because a pile of them danced around and sang along; great fun.”

Glencoulee has also developed a large student fan base through the years. Students come to the shows to support their instructors and enjoy the music.

Burke: “I always figured it was a great way to connect with students who got the chance to see another side of us.”

Kavanagh: “It has always been something of a surprise to me that so many of our students come to our gigs and really enjoy the music.”

Regardless of the perks that come with being in a band, all members agree what they enjoy most is each other.

“I like the camaraderie, the relationship between the three of us,” says Hepher. “Eleven years is a long time for any band to be together. And the great privilege of knowing that we are making music which others enjoy.”

In those 11 years, the three feel they’ve grown musically.

“We’ve steadily improved over the years,” says Burke. “Lately, we’ve dug out some tunes we played years ago, rearranged them, and made them a whole lot better because we’re more able to do that now.”

So, what does the future hold for Glencoulee?

“We’ve been discussing another album, but it’s all about waiting and seeing,” says Kavanagh.

In the meantime, in the words of Richard Burke, Glencoulee intends to “party on.”