Mark Dieser is a smart shopper. He buys fresh, he buys local and he buys in bulk. 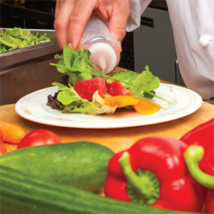 When was the last time you met someone who bought enough cucumbers in four months to reach from goal line to goal line of a football field? Canadian field, no less.

That’s Chef Mark. As an instructor in Lethbridge College’s Culinary Careers program, he’s big into groceries. When he can, Dieser, working with Alvin Tomiyama, Food Services purchaser, buys produce either directly from southern Alberta producers or from distributors who deal with those producers.

Which means students may spend a morning chopping veggies from Lethbridge, slicing sausage from Raymond and pork from Picture Butte, or creating delicacies with goat cheese from Fort Macleod. And where else but Taber would a food service in Lethbridge obtain corn?

“About the only thing we can’t get locally is seafood,” says Dieser of his landlocked purchasing plan. “We can get trout from Pincher Creek, but it turns out they come first from a lake in Saskatchewan.”

Still, much of what winds up on the biodegradable plates in the college’s Food Court started out relatively close to where it’s consumed, growing and grazing in the fields of southern Alberta. In fact, the cucumbers, tomatoes and lettuce Culinary Arts requires travel across a parking lot, from the college’s Aquaculture Centre of Excellence.

“We try to buy as much as we can locally, based on our policy to purchase based on best quality, best service and best price,” says Dieser. “We still have to use large suppliers for some things, but their quality is also good.”

The value of homeland securing is obvious: the college lessens its carbon footprint, supports local business, assists producers with research and development (see story on next page) and adds considerably to student learning.

“Our students get to meet local producers and get a full understanding of the processes involved in bringing each commodity to market,” says Dieser. “They gain exposure to specialized products, organic meats and ethnic food. They tour farms. And they provide feedback to producers on new products. And when they graduate, they take that ‘buy local’ philosophy with them.”

Lethbridge College, it turns out, also hires locally. Dieser joins chefs Rob Sonnenberg, Doug Overes and Stephen Klassen as former Coaldale kids who, it turns out, could stand the heat and didn’t get out of the kitchen.

After apprenticing at the Lethbridge Exhibition, Dieser completed his technical training in 1989 at SAIT, as Lethbridge College did not at that time have the program he required. He then spent four years at Jasper’s Mountain Park Lodge, rising to executive chef, before working as a government meat inspector. He co-owned Luigi’s Restaurant in Fort Macleod before coming to Lethbridge College in 2000.

Last year, Dieser and his students presented a gala dinner in the college’s Garden Court Restaurant featuring the best from area farms and producers. Diners tucked into pork from Broek Pork Farm near Park Lake; buffalo from Old Country Sausage in Raymond; varied vegetables from Broxburn Farms in Lethbridge; meat from Canada Gold in Picture Butte; potatoes from Bassano Growers and a dollop from others around the area.

Dieser’s list of suppliers continues to grow. They now approach him, thanks in part to word of mouth and to a stronger brand identity by Lethbridge College. Then, too, there’s Dieser’s own inquisitiveness. While heading to a round of golf at Picture Butte last year, he spotted a sign for Vital Green Farms. After a little snooping, he found a source for organic dairy products, including, if your heart can stand the assault, 52 per cent cream.

Often, Culinary Careers will work with a producer to create a specialty, such as tiny squash or a specific cut of meat. That enters the realm of research and development, an area all Dieser’s producers are keen to explore.

“They’re hungry for that stuff,” he says. “It helps them maintain their quality and find new products.”

Of course, like any other southern Alberta kitchen, Lethbridge College rotates its menus around local availability. Softer vegetables are used in the spring and early summer; harder root produce hits the cauldron in the fall. And then, too, there are products that just can’t be coaxed from the prairie landscape.

“Fruit is not something we can purchase much of locally,” says Dieser. “Or, it’s very seasonal. If we wanted to buy only local watermelon, for instance, we’d have two months of watermelon. That’s when you need the big guys.”

Often, even then, the college does what it can to support local business. Coffee for special events, for instance, comes from Cuppers in Lethbridge. Fries with that? McCains. Chicken? Sunrise Poultry. Pasta? Let’s Pasta. Specialty foods? Asian Market. Saskatoon berries? Area Hutterite colonies. Flour? Ellison Milling. And there are others.

“There’s so much out there that people don’t know about, beyond trips to the farmer’s market,” says Dieser. “We’re giving them that exposure.”