With a whoosh past the finish line, the South Korean four-man bobsled team struck an unlikely Olympic silver medal. About 1,400 metres away, near the start line at the top of the hill, a German-born, Canadian-raised, Lethbridge College instructor let out a cheer. “You were laughing, you were crying, you were excited,” says Florian Linder, describing the medal-winning scene. “That was something really special to be a part of.”

Linder, a General Studies instructor at the college, was in Pyeongchang as a technical coach with the Korean bobsled team. The former national team athlete held the same role for the Canadian team in Vancouver in the 2010 Olympics and the Russian team in the 2014 Games in Sochi. “My third Olympics as a coach and my third time working with the host nation,” says Linder. “It is unique to work with the home team. It is different competing at home than somewhere else.”

The home nation often faces increased pressure to perform well. Linder now has a stirring first-person account to share with his Sport Psychology students, as he watched that burden affect pilot Won Yun-jong in a challenging two-man event. But he then saw Yun-jong’s redemption in that slide to silver in the four-man competition. “When they won the medal in the four-man, the sense of team was something you could really feel,” says Linder. “They brought everyone together and they celebrated as a team and a country. It was a special team.”​

To coach for Korea, Linder was out of the country from Feb. 6 to 26. Making that sort of time commitment in the middle of the academic year isn’t easy, but he found a cheering section at Lethbridge College. “I’m so thankful that everyone at the college has been so supportive,” says Linder. “Obviously, the students come first, so making sure the students were taken care of was the main thing, but everyone’s been very supportive.”

Linder can tap into his Olympic experiences in the classroom, where he teaches a variety of topics, including Exercise Science, Criminal Justice, and Anatomy and Physiology. “The experience that I see at the Games, I can relate to some of the principles that students learn in the books and the lectures,” says Linder, who packed a 360-degree camera from the college’s Centre for Teaching, Learning and Innovation. “I also try to provide video footage for some of the classes like biomechanics, where the students can then work on acceleration and coefficient of friction and things like that. I’m more than happy to bring my experiences to the students.” 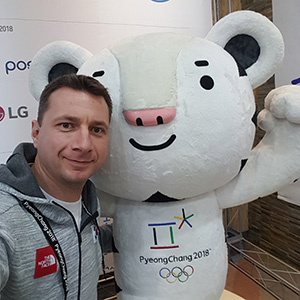