A flock of Lethbridge College students is proving that living individual values is as important as academic success. 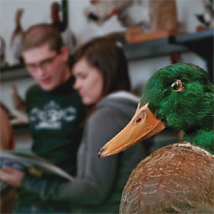 And the continent’s ducks respond with a grateful quack.

The students, all from the School of Environmental Sciences, are members of the campus’s chapter of Ducks Unlimited Canada, itself a rarity as the only chapter at a post-secondary institution in the country to take flight.

For students such as Stephen Hill, this year’s chapter president, and volunteer Laurie Weidenhamer, membership in DUC presented an opportunity they couldn’t pass up. It’s allowed them to be involved in an environmentally responsible organization while developing their personal skills as communicators and leaders.

“I think what really defines you as a student is what you do outside the classroom,” says Hill, obtaining his Renewable Resource Management diploma to add to a Lethbridge College degree in Conservation Enforcement. “Ducks Unlimited gives you a chance to make a real difference. I want to be known for something other than academics.” Hill was a charter member of the group when it formed at Lethbridge College two years ago. When he ends his studies, he intends to return to campus for the annual dinners each November as do other alumni, some who travel eight hours to Lethbridge from northern Alberta and Manitoba.

For Weidenhamer, who will have her Renewable Resource Management diploma this spring, DUC participation meant organizing the 2007 banquet, a task she would likely not have attempted before joining the chapter.

“People don’t realize how beneficial it is to develop yourself and your potential,” says Weidenhamer. “I’ve developed closer relationships with instructors and learned presentation, which I can add to my resume.”

Weidenhamer “paid my dues” over a summer, studying the area’s pintail duck population as part of a doctoral thesis for Terry Kowalchuk, the school’s academic head.

The presentation facet wasn’t easy at first for Hill, one of those who would rather have faced a firing squad than speak in public. But, as chapter president, the firing squad wasn’t an option. He addressed the November banquet with aplomb and now knows he needn’t fear such an opportunity when it arises in the field.

“As a conservation officer, it’s something I’m going to have to do on the job as part of my community involvement,” he says.

Instructor Kerry Edwards, a Lethbridge College alumnus (Renewable Resource Management ’83) watched Hill and Weidenhamer develop through the DUC chapter as faculty advisor to the group and is proud of what they’ve achieved.

“You can see the leadership potential develop,” he says. “It’s quite remarkable.”

The Lethbridge College chapter is a milestone for the organization, says Nick Alvau, one of the longest-serving DUC members in Alberta, who sees the student involvement as the changing face of the organization, one with a previous image of developing duck populations for hunting. It’s an image that has changed to where wetland conservation far outweighs hunting as a motivation for joining.

“DUC has become more concerned with related issues,” says Alvau. “It sees the need to preserve duck habitat for pure conservation purposes. There’s been a definite swing in membership.”

Alvau, who worked at Lethbridge College for a spell four years ago, gives credit to Edwards for kick starting the chapter, which has provided DUC with more than one or two employees along the way. Several, including Karla Guyn and Perry McCormick, are now among DUC leadership. The organization has hired 20 to 30 summer students during the past 15 years.

“It’s been a beautiful marriage,” says Alvau. “It’s a great opportunity for students they can use to their advantage later, and DUC has hired several grads from the program. So far it’s dovetailed nicely.”

“Traditionally hunters made up the vast majority of DUC members,” says Edwards. “As hunter numbers dwindled, support for wetland conservation has been taken up by non-hunters.”

The chapter usually meets for an hour each week; members must be continuing students at Lethbridge College and maintain a minimum GPA of 2.5. The three dinners have raised more than $60,000, a portion of which pays for scholarships.

Most chapters with long-term members have six months to a year to plan dinners, but students have from the start of the fall semester, a period sliced even thinner by a month of field trips.

“Membership is as good as a classroom,” he says. “I learned a lot about group dynamics just standing in front of a group. If you don’t do these things, how do you know you can’t?

Edwards sees the involvement as an education-added activity that will not only serve participants for life, but is creating a new wave of conservationists, students who know how the land lays and why it must be protected, not merely for ducks, but for all species who rely on its bounty.