Lethbridge College will receive nearly $1.15 million in federal research funding, the Honourable Kirsty Duncan, Minister of Science and Sport, announced in June in Ontario. The college will receive $1 million towards its Centre for Sustainable Food Production through the Canada Foundation for Innovation’s (CFI) College-Industry Innovation Fund (CIIF). An additional $147,023 of funding will provide two Lethbridge College researchers with equipment vital to their work through the Natural Sciences and Engineering Research Council of Canada (NSERC) College and Community Innovation (CCI) fund.

The CFI grant will go toward the creation of a new greenhouse on the Lethbridge College campus that will work in conjunction with the existing Aquaculture Centre of Excellence. Additional funding and announcements about the new Centre for Sustainable Food Production and research greenhouse are expected in the coming months.

The NSERC grants will be used to purchase equipment for the college’s research work in precision irrigation and in antibiotic identification from native plants. The awards come from the Applied Research Tools and Instruments (ARTI) grants, which provide funding for equipment used in the applied research process. These are Lethbridge College’s first ARTI grants, as the college continues to expand its applied research department. Read more about the research that takes place thanks to these grants in future issues of Wider Horizons.

Hundreds of students, employees, alumni and friends of the college came to campus in March to celebrate diversity during the annual Bridging Cultures event. At the end of a jubilant dance called the Bhangra, which was taught by instructor Gurpreet Singh and performed by international students originally from India, the audience joined in the dancing. 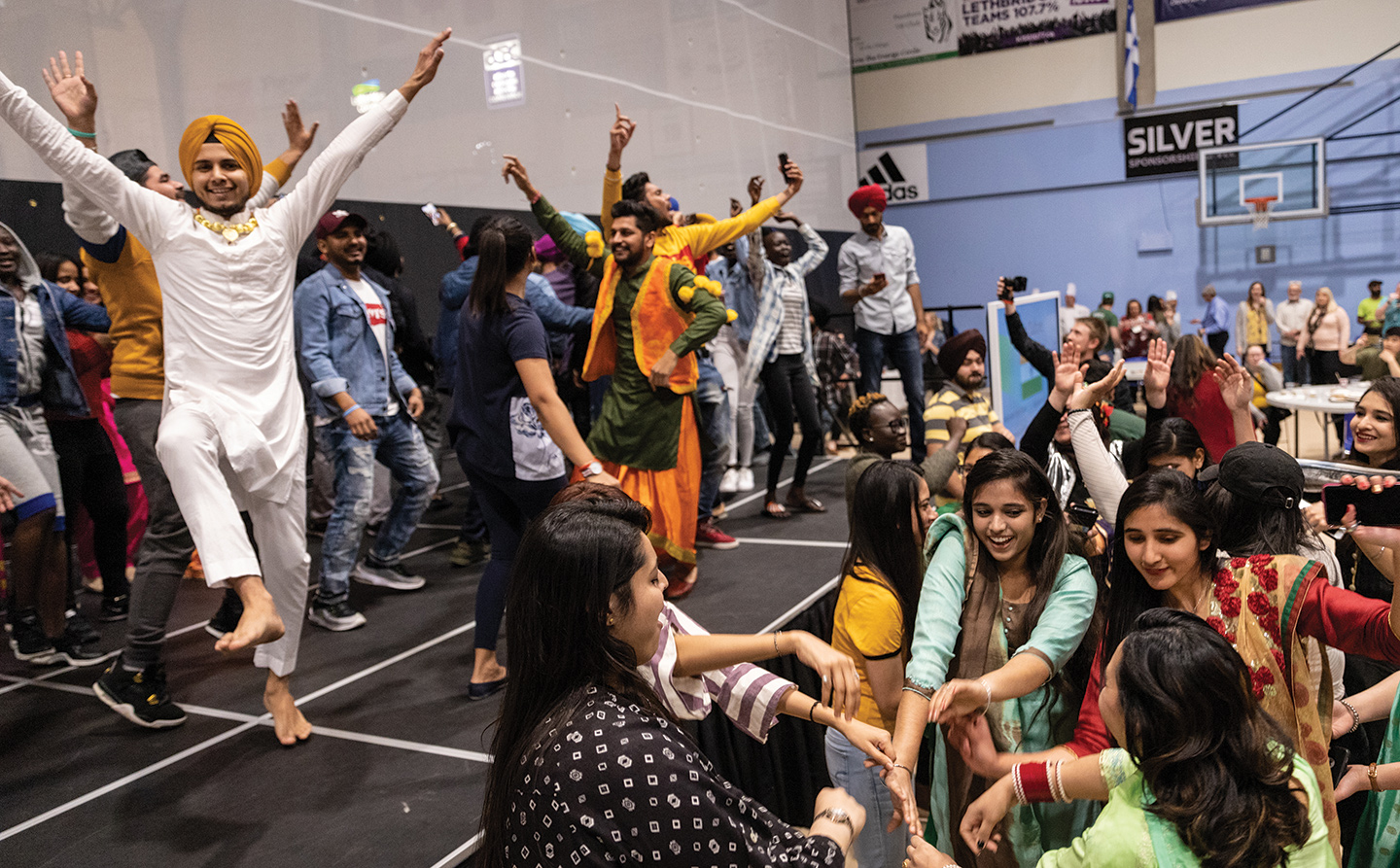 For the second year in a row and fifth time in six years, Lethbridge College’s magazine has been named the best community college magazine in North America. And for the first time it has been awarded a Grand Gold – one of the highest honours bestowed by the Council for Advancement and Support of Education (CASE). The award is just one of several ways members of Lethbridge College’s Communications, Marketing and Alumni Engagement teams have been recognized in their industries in recent months. The awards and recognition include: 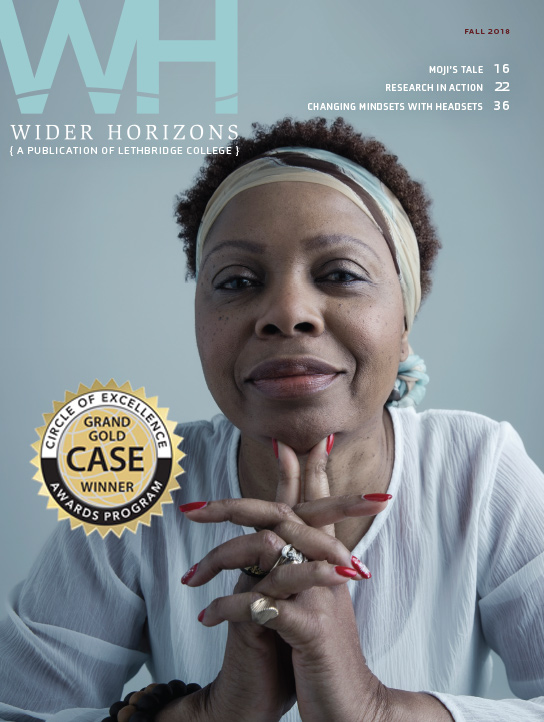 The college received five Paragon awards – the most of any Canadian community college and one of just three institutions to receive five awards. They included:

• Silver award in the Special Event category – for Coulee Fest 2018

• Bronze award in the Excellence in Writing – Short Form for “The Last Word,” a special

feature in Wider Horizons written by Lisa Kozleski and illustrated by Eric Dyck.

Wider Horizons received a Grand Gold for the spring and fall 2018 issues in the community college magazine category. In addition, the magazine was named a finalist for the Robert Sibley Magazine of the Year award – the most prestigious award given to recognize excellence in the field of post-secondary alumni magazines.

This non-profit association, which supports the Alberta magazine publishing industry, announced its annual awards at a gala in Calgary on April 4. The finalists from Lethbridge College were:

• “Time of His Life,” written by Lisa Kozleski, a finalist in the Alberta Story category

• “Time,” with stories by Lisa Kozleski and designed by Dana Woodward, as a finalist in the Editorial Package category

Lethbridge College President and CEO Dr. Paula Burns and Lowell Yellowhorn, coordinator of Indigenous Services, attended the Perspectives on Reconciliation Workshop at Yukon College in August. Dr. Burns was part of a Presidents’ Panel, which discussed governance and policy surrounding the indigenization of campuses, while Yellowhorn shared the college’s work so far on indigenization and reconciliation. He was also invited to perform the college’s Honour Song.

Kudos to the college’s Geomatics Engineering Technology program, which received national recognition in April from Technology Accreditation Canada. To earn the accreditation, an independent team performed an extensive audit of the program, including interviews with employers of graduates, alumni, students and faculty, to determine whether it meets the educational standards of Canada’s engineering technology and applied science profession.

Congratulations to these Lethbridge College students making a difference:

Justin Bruised Head (Ecosystem Management 2019) and Jason Cotton (Renewable Resource Management student) represented the Kainai First Nation at SevenGen 2019: Powering Resilience in Calgary in January. This was the world’s first Indigenous student energy summit and Bruised Head and Cotton were selected as the only two representatives from Kainai.

Interior Design Technology students Jessica Banman and Teunieke Anker won the Ashcroft Master Builder design challenge in 2019. Ashcroft will now build the home, and the two students have been working on the building project as interns. Banman and Anker’s winning design, The Daphne, was selected for its retro-modern look that met with Ashcroft standards as a unique use of space that will meet market demand. The proceeds from the sale of the home will be donated back to the college.

Skylar Peters (Digital Communications and Media 2019) won this year’s Troy Reeb Internship (see p. 23). During his two week, one-of-a-kind internship, Peters spent time in Toronto and Ottawa with the teams at Globalnews.ca, Global Toronto (TV), Global News Radio 640 Toronto, The Morning Show and the Ottawa bureau of Global National. For more details about his experience, check out his blog at lethbridgecollege.ca/reeb-internship-journal.

Promoting a campus culture that is inclusive to all, Lethbridge College once again raised the Pride flag on its campus in June. The rainbow flag flew outside of the main entrance to the college, in conjunction with Lethbridge-wide Pride activities that were taking place throughout June. This is the fourth year that the college has flown the Pride flag in support of the LGBTQ+ community. Representatives from the college also, once again, marched in the Lethbridge Pride parade on June 22. Members of the leadership team, employees and students walked together as a symbol of solidarity and support.