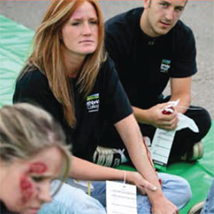 splattering to the ground around him. A rip in the leg of his pants reveals a shattered bone sticking out through flesh with more blood spurting in a thin stream that soaks his clothes in dark, spreading stains.

Nearby is a young woman seeping blood from deep abrasions that have torn the skin from the side of her face and one arm. A man, ghastly pale with fingernails turning blue from lack of oxygen, seems to be having a heart attack. Stretching out an arm with a pleading look on his face, possible death mere minutes away, he reaches for . . . his cup of Tim Hortons coffee.

Gotta have that coffee first thing in the morning.

“Hey, can you help me with the cream? I don’t want to break a nail,” he says. When it’s pointed out to him that in the space of five minutes he’s voiced concerns about his nails and how his makeup looks, Bill Olinek chuckles and says he hopes it’s the last time he expresses such worries.

Bohachyk, Olinek and Morgan Parcher, the woman who looks like a serious road rash victim, are part of a ghastly looking group of individuals from Lethbridge College who have volunteered to help the Lethbridge Fire and Emergency Services with an emergency response test for new recruits. The volunteers normally look much healthier, but experts in applying disaster scenario makeup have turned them into a pack of walking wounded, injured in an imaginary building collapse.

While Parcher is a program assistant in the College’s Centre for Health, Justice and Human Services, Bohachyk, Olinek and the majority of volunteers are students taking Emergency Medical Services (EMS) training through the College. Coming out to play the role of victims in this realistic test provides them with an opportunity to support an industry they are keen to join.

A mix of Emergency Medical Technician (EMT) and Paramedic students, this is a group that has already completed the basic Emergency Medical Responder (EMR) training and made the decision to move forward in their careers by acquiring higher levels of skills and knowledge.

Despite the appearance of horrific wounds, the students are all smiles and sharing laughs as they kid each other about how they look. Listening to their conversations, it quickly becomes apparent that they are genuinely thrilled to be involved and pursuing a career that means so much to them. They’re not just here for a job; it’s really more of a calling.

Bohachyk completed his practicum at the end of June, wrapping up his EMT training. He says he’s always enjoyed helping people and made the move to EMS after spending 4½ years learning the funeral-home business.

“I’d rather help people before they die instead of after,” he says.

Helping people really is the focus in the EMS field, as Bohachyk discovered during his practicum on the Blood Reserve. He says that while the majority of calls he attended were fairly low key, there were the exceptions for which he still felt well prepared.

“It’s a lot different from what you’re used to in class, but class really helps prepare you for the experience with realistic scenarios,” he notes, adding the move from mannequins to real people is the biggest change.

Bohachyk may have just completed the EMT training, but he doesn’t think his education is complete yet. He’s already thinking ahead to training as a paramedic. But he says he’d like to “get out in the field and get some experience first.”

After working as an EMT for the Coaldale Emergency Services for eight years, he moved to a position in Standoff at the beginning of June. His move into EMS followed a stint working in the oilpatch. Deciding he didn’t want to live on the road, he took some career counseling and everything indicated ‘fireman’ for him.

Olinek spoke with City of Lethbridge Alderman Tom Wickersham, who was then the fire chief. Wickersham advised him to check out Coaldale, which was looking for staff at the time. He took that advice and has never regretted it.

“I can’t see doing any other profession,” he says. “It’s different all the time. Some days you may just sit around, others you can be on the go all the time.”

It was on one of those ‘go all the time’ days that Olinek made the decision to take his career to the next level and pursue training as a paramedic.

“There have been some calls that make you think. One in particular was a choking call.”

Olinek says the call came in early one morning. A family was getting ready for a day out together when the mother started choking on a piece of dinner bun. EMTs did their best to help, including using the Heimlich maneuver, but nothing was working.

“Paramedics had to come and use their advanced skills,” he says, adding that without their training and techniques, the woman would have died.

The possibility of losing someone because of a dinner bun was too much for Olinek. He made his decision that day to pursue training as a paramedic.

Stepping up to the next level is what drew both Judy Minor and Sharon Harvey to apply for the EMT training. Both women have the EMR rating under their belts, but they also have a strong desire to enhance their skills and knowledge. They began EMT training at Lethbridge College in September. The possibility to train in Lethbridge helped make the decision to move up easier.

Minor has worked with youngsters and seniors in the past. She wanted to build on that interest when looking to make a career change.

“Helping people is what the big thing is,” she says, adding “I use to break horses, too, so I like the more exciting jobs.”

Her EMR training took place in Calgary during the fall of 2007. She’s coming to Lethbridge for EMT. With a husband and seven-year-old daughter at home, the closer access was a big factor for Minor.

“I’m from Claresholm and I was kind of excited to get accepted to take it here; it’s so much closer to home.”

“It’s two days a week and the rest is at home, so I can keep working while taking the training,” she says. “It makes a world of difference to be able to train in the south.”

Her decision to pursue EMT training has the full support of the Picture Butte town council and administration. It’s also a decision that allows her to give back to the community.

“Being able to have that extra knowledge to help our constituents is rewarding.”

As an EMR and looking after ambulance, fire department and emergency services for Picture Butte, Harvey appreciates the impact of providing training in southern Alberta.

“It makes a huge difference to us,” she says. “I have one EMT graduate and two paramedic students from this program in Picture Butte and their skills level is top notch.”

Local training allows for development of a stronger support system, she says.

“Everyone involved in the field pretty much knows each other in this area and we can call on each other to help out if needed. We’re close knit in southern Alberta. We’re developing those relationships already and that’s important.”

Harvey believes training in Lethbridge allows more volunteers in the south to move up from EMR if they wish. Costs can often end up being a deciding factor when making that decision.

The financial impact can be huge when the expense of travel and accommodations is considered. Heading to Calgary or Edmonton may not be an option for volunteers who need to continue working to support their families.

That support seems to work both ways for the students. While many are supporting their families, the decision to pursue further education can require the backing of those near and dear. During the disaster scenario, Harvey points out her husband, daughters and grandson. They’ve come out to watch and support Harvey in her role as victim.

“My family has been so supportive of me from the very beginning,” she says.

Minor’s family has also been right there for her. Her husband, who ranches near Claresholm, thinks her career move is a good change for her, and her seven-year- old daughter is a huge fan.

“She helps me with my scenarios. She often plays the part of victim and probably knows it better than me,” she says with a laugh.

“Mom is a firefighter EMT, so she’s fine with it,” she says.

Brasnett took EMR training through St. John’s Ambulance in Calgary and completed her EMT in Vermillion. Paramedic training in Lethbridge means she has a chance to take her practicum with Fire and Emergency Services headquarters ambulance in the city.

Working in Pincher Creek, she discovered that variety in the job adds to the appeal of the career.

“I do enjoy it. We do fire and ambulance in Pincher Creek, so it’s never the same.”

The combination of services means Brasnett may start out the day working ambulance, then have to switch to fire services part way through a shift. It definitely keeps things interesting.

At the end of the Lethbridge Fire and Emergency Services exercise, the smiling band of bloody victims comes together for a final laugh over their shared experience. They’ve helped the new recruits complete their training. They’ve gained some valuable insights into disaster response. They’ve strengthened bonds that are vital in the EMS field. Now it’s time to ‘heal’ and get cleaned up. The fire hall crew has a barbecued lunch ready to share with their new colleagues.