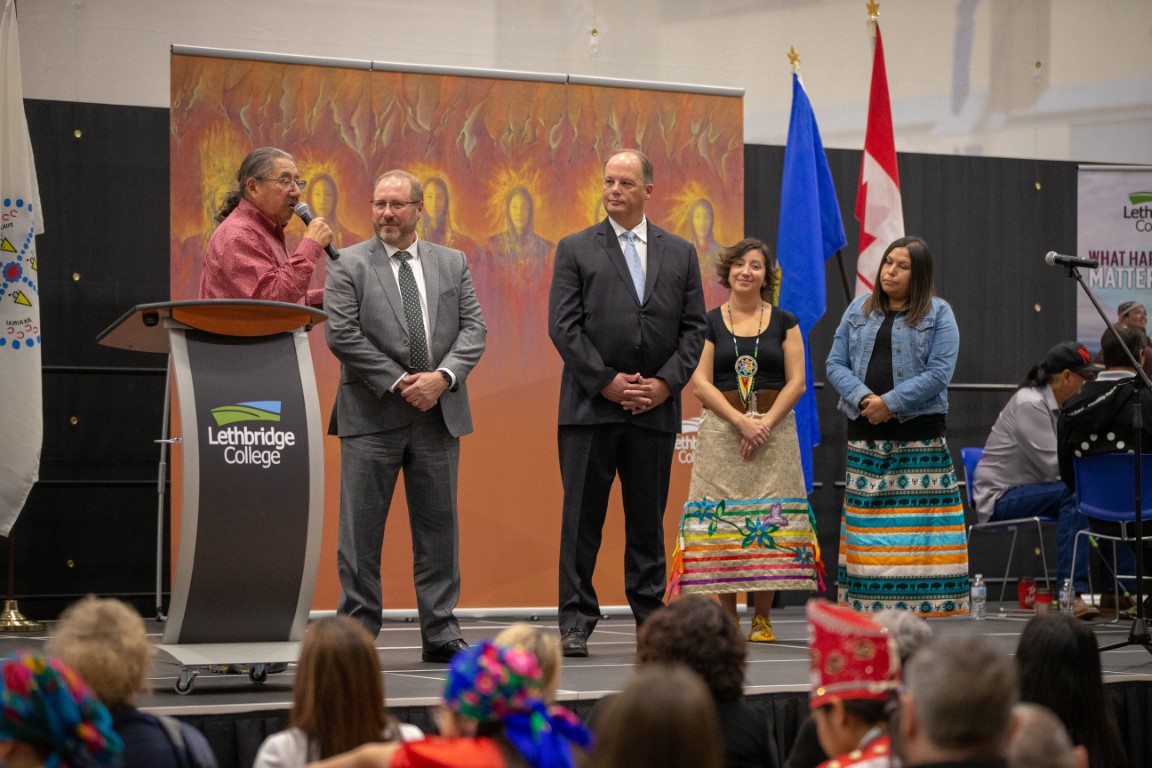 “Doug and Mark are donors and partners, but much more than that, they are passionate supporters of our students,” says Dr. Paula Burns, Lethbridge College President and CEO. “They are both frequent visitors to campus who believe education should be accessible to everyone. They have taken hands-on roles in learning how they can support Indigenous students and have immersed themselves in learning about Blackfoot culture, so they are very deserving of these honours.” 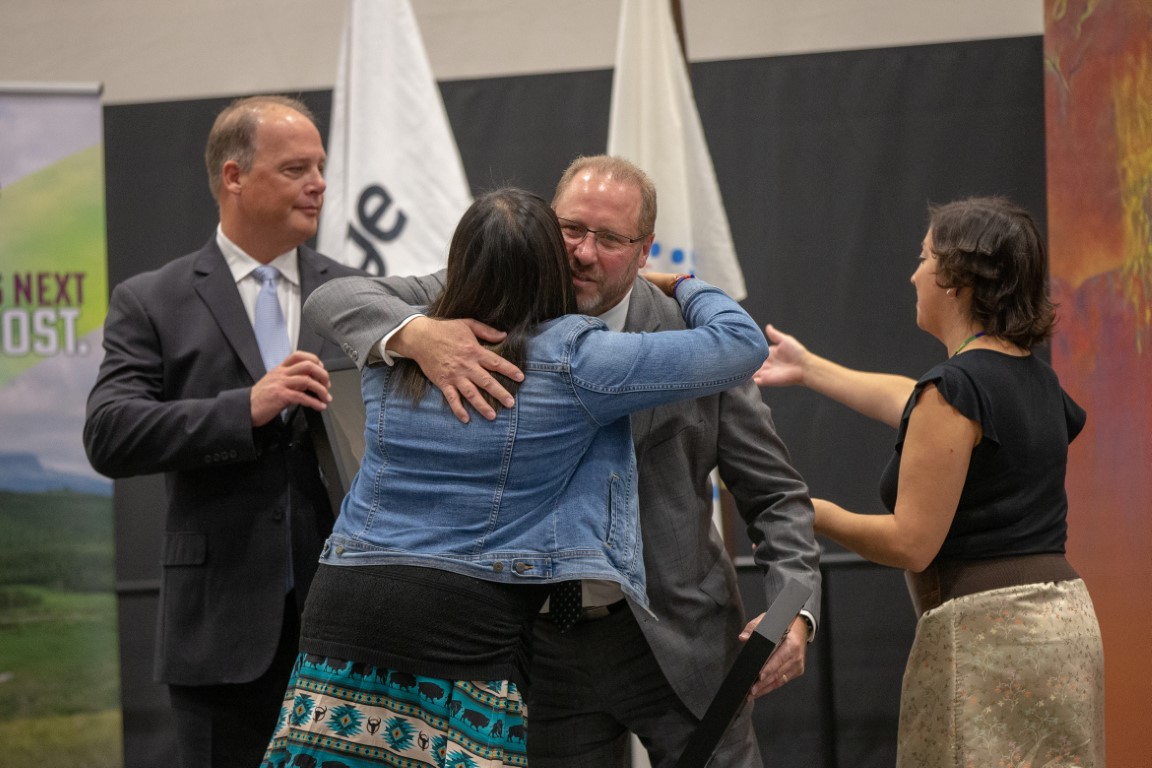 Brown is the regional Vice President – Alberta South for RBC and Camrud recently retired as RBC’s main Lethbridge branch manager. RBC began a partnership supporting Indigenous education at Lethbridge College in 2007, and has since provided nearly $600,000 to support Indigenous initiatives, events and programming. Beyond the partnership, both men have made genuine connections to the local Blackfoot community, taking time to learn about the culture, to talk to Grandparents and students, and to learn about what it means to be on Blackfoot territory.

“Their names are meant as a gift from the Blackfoot community,” says Marcia Black Water, Indigenous student initiatives and community relations coordinator. “It signifies the partnership that we have with Doug and Mark, and the friendship we've built with them. The names are meant to help guide them as they walk through life, whether it's here at the college, in the community or in their day-to-day lives with their families. It's a gift of blessing.”

Camrud was given the name Saakooaapaspii, which means Last Dancer. Brown received the name Kiinai’ipos’taitaapo’aako’kaatsis, which means Long Time Many Camps.

“I am very humbled and honoured,” says Brown. “We get up and go to work every day to help our clients thrive and the community we are a part of prosper. We shared those feelings with the college and the Blackfoot community. It has always felt natural and has never felt like work.” 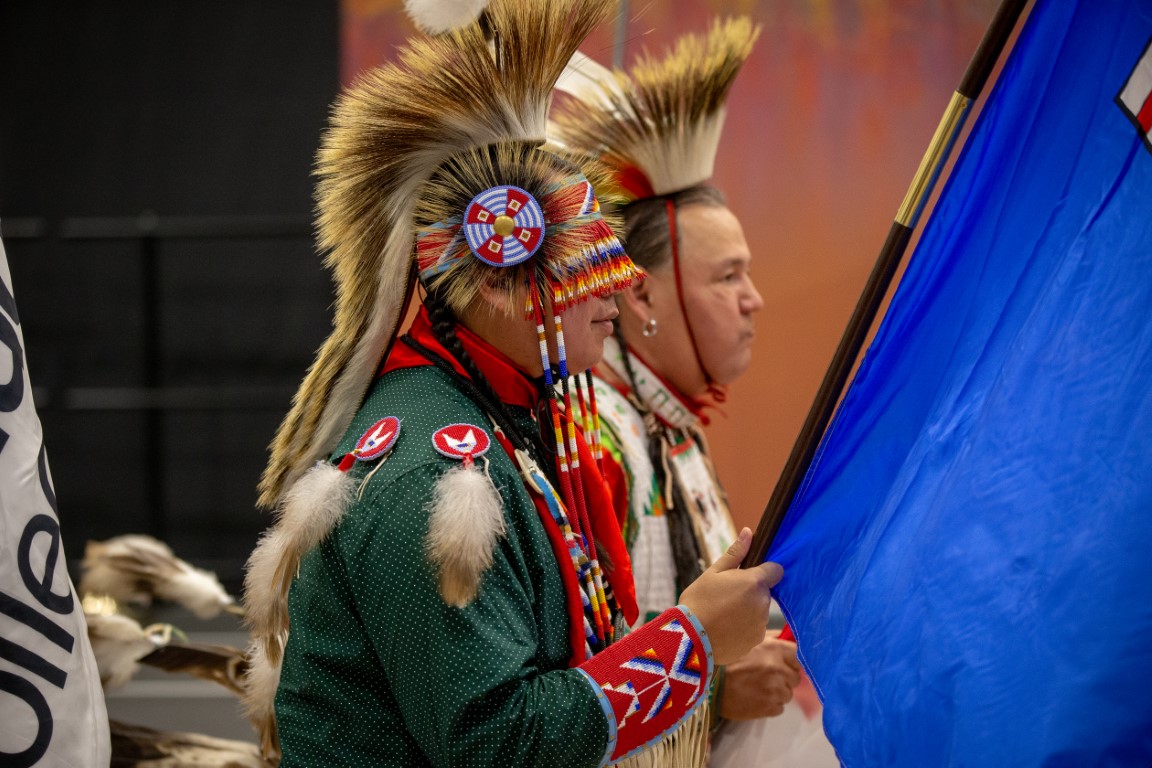 Camrud shares that same sense of community. “We value diversity, it's one of RBC’s values and we know that the college has very similar values,” he says. “We were so aligned over the years and it was a privilege to always be part of that partnership with the college.”

On Thursday, Brown announced that RBC was increasing its commitment to Lethbridge College through a $75,000 gift from the RBC Foundation Future Launch program. The donation will support Indigenous cultural support programming, the Indigenization of campus and the development of the college’s Indigenous strategy.

“RBC’s commitment for more than a decade has been vital to making our Indigenous programming sustainable and supportive for students,” says Shanda Webber, manager of Indigenous Services. “Beyond that, it’s who Doug and Mark are as people that make this relationship special. They have made personal and long-lasting relationships that go well beyond their roles with RBC.”

Indigenous Celebration Day featured traditional music, dancing, food and cultural displays. This fall, more than 300 Indigenous students are taking diploma, degree or certificate programs at Lethbridge College. Lethbridge College has a “Circle of Services” to support its Indigenous learners. More information can be found at lethbridgecollege.ca/indigenous.