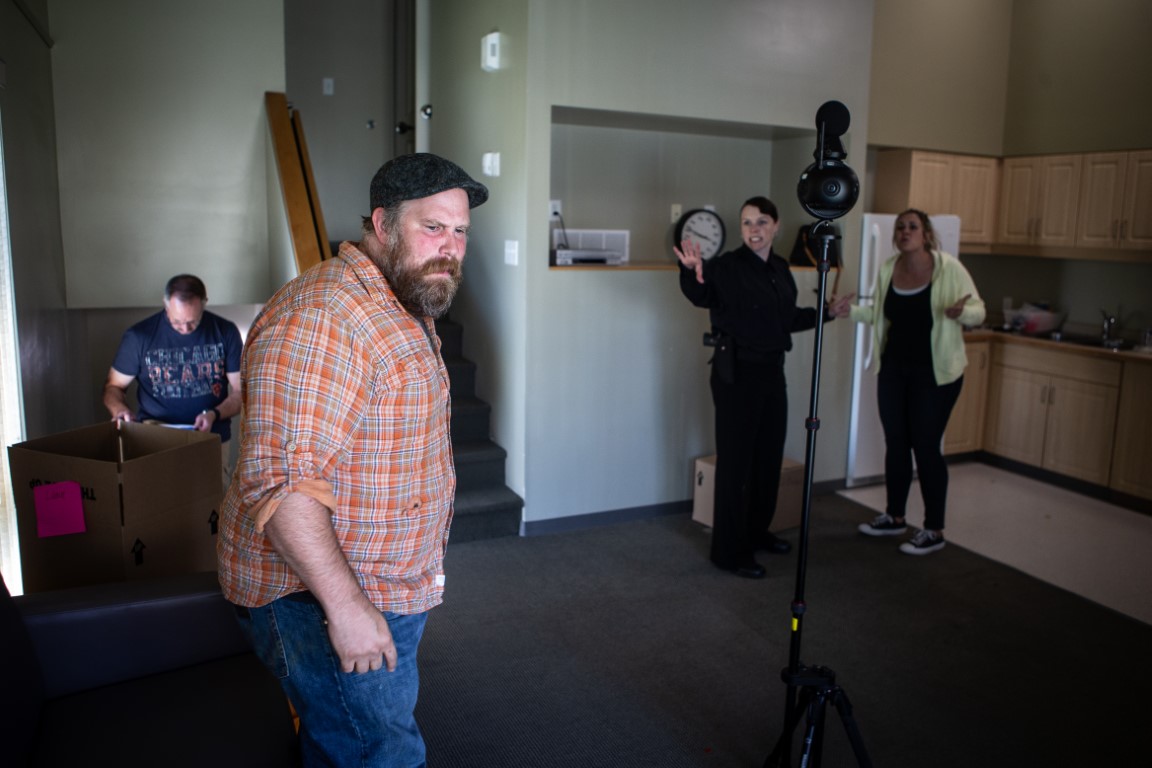 A police officer knocks on a door and immediately has an angry person screaming in their face – how do they react? A veteran officer can draw on experience to resolve the situation, but the interaction can cause inexperienced officers to freeze. A new internal research project at Lethbridge College will test whether virtual reality can better prepare j ustice and corrections students for those types of face-to-face interactions.

Dave Maze, chair of the college’s School of Justice Studies, and George Gallant, instructor in the Digital Communications and Media program, are collaborating on the one-year study. The pair are using 360-degree video to create two different training scenarios using live actors. Once completed, students will use virtual reality (VR) to enter the scenarios and interact with the people in the scene.

Currently, students learn communication theory in a classroom setting and practice their communication techniques on a simulator before jumping to the face-to-face human tests. Maze and other instructors found the simulator was great for getting repetitions in how to properly communicate, but it wasn’t adequately preparing students for the real life interactions. He wants to see if the VR training may help to bridge that gap.

“I thought VR would be a way they could practice those skills and be one step closer to interacting with a live person,” says Maze. “In conversations with our colleagues around the college, we came up with the idea to actually design our own scenarios, for exactly what we need. We already have scenarios developed for crisis situations, so let's bring those to life and see if we can actually do this, and then have the students use it.” 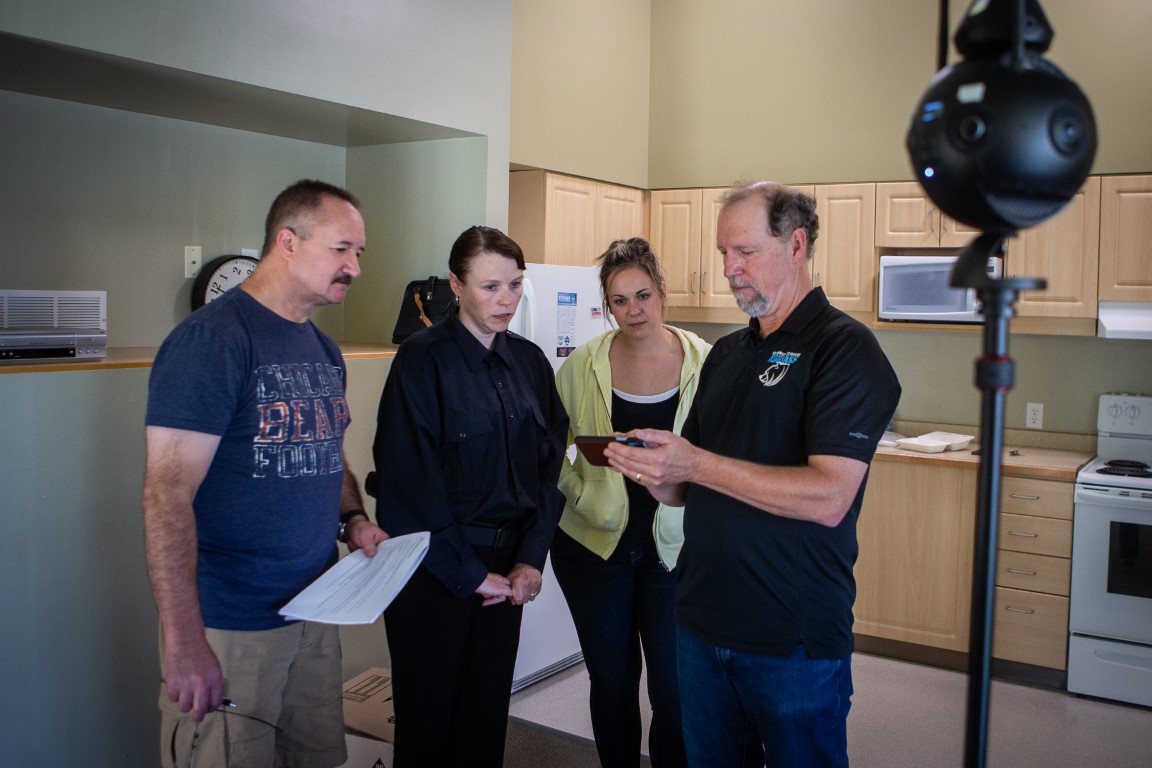 Maze teamed up with Gallant, who had the idea to create the situations in 360-degree video with actors playing the role of those involved in the crisis situations.

The instructors pitched their idea as a Scholarship of Teaching and Learning (SoTL) research project, facilitated through the college’s SoTL team. They were successful recipients of the College’s internal STAR (scholar teaching and research) grant. Gallant and Maze will produce and test the video scenarios over the next few months. In the Winter 2019 semester, Maze will then use two classes as test cases – one class will continue with current curriculum, while the other will implement the virtual reality training.

A number of factors will then help the instructors make their final conclusions, including final test results and a student survey. They will also partner with a Calgary company to use a state-of-the-art biometrics belt that measures factors like heart rate, blood pressure and brain waves to give an indication of how students are reacting in pressure situations.

“With the biometrics, we can digitally record what the students are going through,” says Maze. “Then we can take students through and show them the different touch points during the scenario. They’ll be able to see where they all of a sudden they became stressed and their blood pressure and their heart rate went up, or where it dropped all the sudden after a certain part of the scenario ended. That'll give us a measurement of how the students who didn’t experience the VR scenario did against how the students did have the VR experience.” 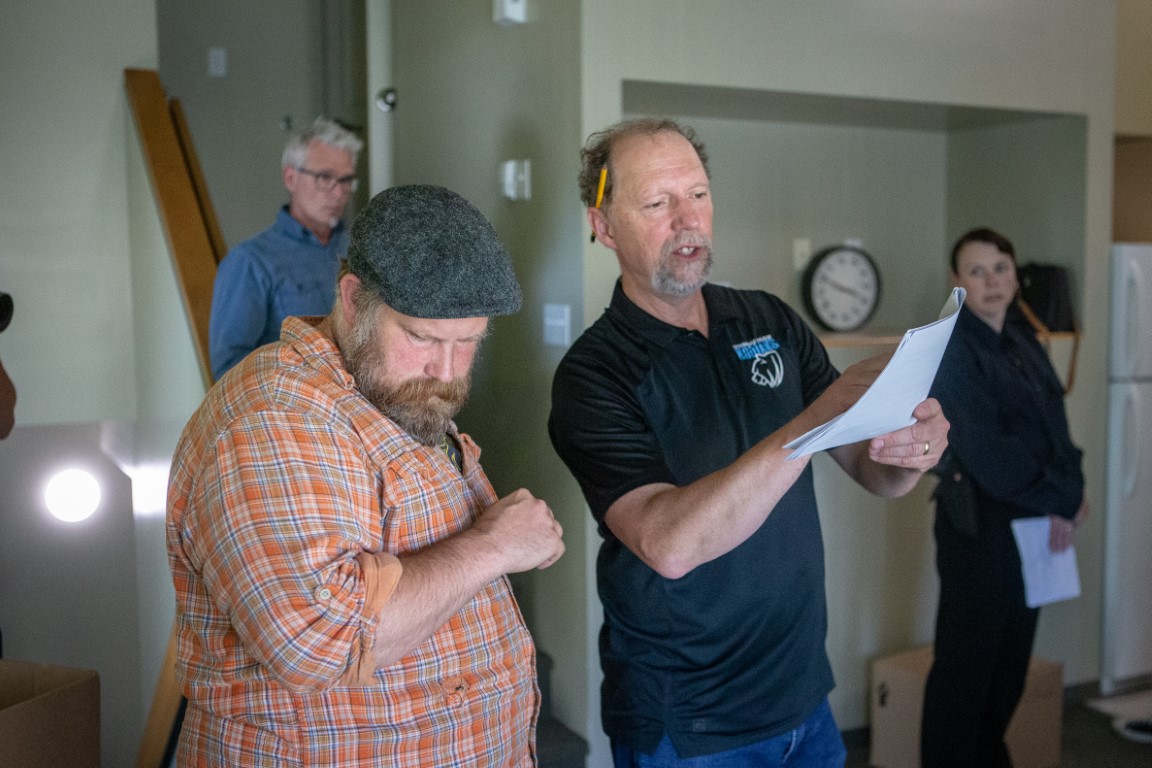 Maze and Gallant are developing two virtual reality scenarios – one featuring a domestic abuse situation and another involving a traffic stop. Each will allow students to make choices along the way that will either lead to the resolution of the situation, or escalate it.

“The challenge has been how to make it interactive and give the users the opportunity to make choices, right and wrong,” says Gallant. “And then figuring out what the consequences of those right and wrong choices are.”

The two instructors say they have already fielded inquiries from police and corrections agencies interested in their technology and the eventual findings of their study. The one-year research project will be completed by mid-2020.

Lethbridge College’s Scholarship of Teaching and Learning program supports research projects that study teaching and learning with a focus on improving student learning. The college’s SoTL team is facilitating four projects this year, providing $38,000 worth of support. Since the inception of the STAR grant, the college has supported 12 instructors and staff to complete SoTL research projects at the college. Instructors who have completed SoTL research projects have disseminated their findings at provincial, national and international higher education conferences, increasing the reputation of the college in regards to promoting excellence of teaching and learning.