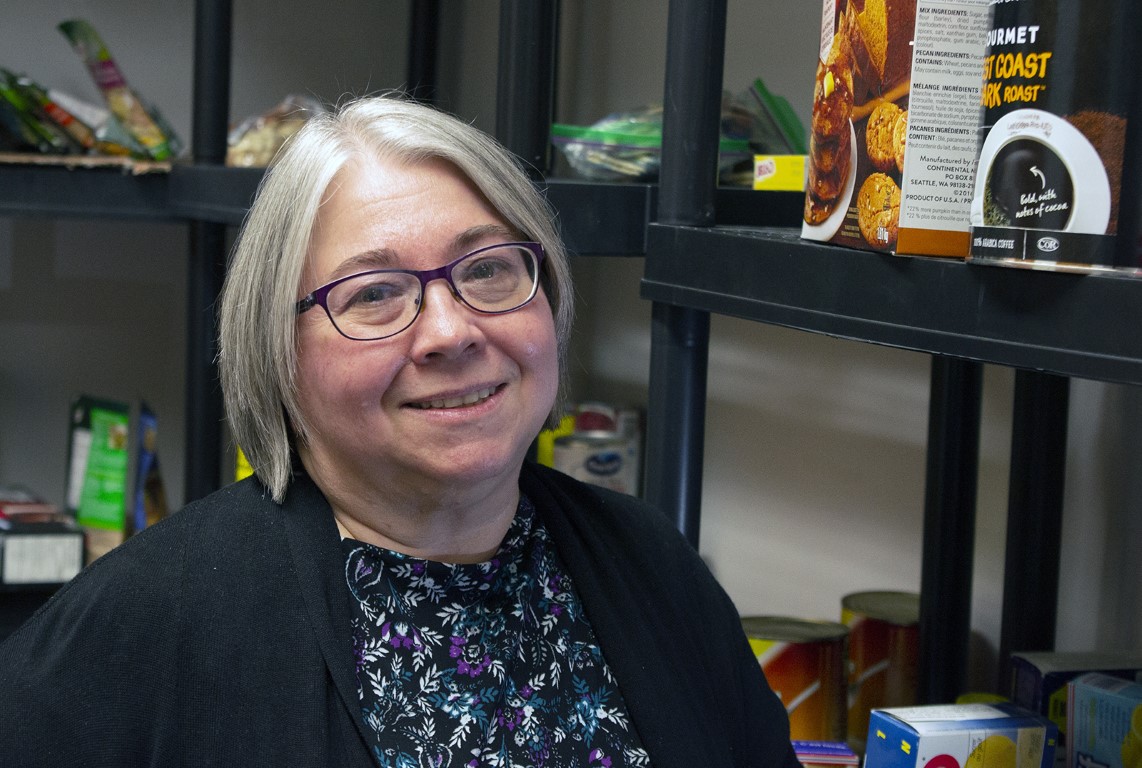 Many people have known the exhilaration of returning from a conference with minds full of ideas they would like to implement in their work. But how many of those great ideas survive the daily demands of their jobs?

Cindy Warner, an access services specialist in Lethbridge College’s Buchanan Library, not only implemented an idea picked up at a conference, she’s helped it flourish for 16 years. This fall, the idea – Food for Fines – celebrates its 30th campaign of encouraging the return of overdue library materials, fine amnesty and promoting donations to the Lethbridge College Students’ Association (LCSA) Food Bank.

The effort has had a staying power she didn’t envision in spring 2003 when she attended a library conference in Canmore.

“Libraries are the hub of the community and often build community within communities,” Warner says. “These presenters were talking about small town libraries in the U.S., and how their towns were really struggling so libraries started accepting food for fines to try to build up their communities’ food banks.”

As the person responsible for overdue accounts at the college library, Warner was drawn to the concept because it supported students in multiple ways. With a small library, the college needs resources returned promptly so other students can use them. Warner also knows how difficult a cash fine can be for some students. A donation of food to help other students would be “a little less painful way to take care of their overdue fines.”

She pitched the idea, and found support at every level, all the way to the President’s office.

Today, Food for Fines campaigns can be found at other Canadian libraries, but in December 2003, that wasn’t the case.

“I didn't really know of anybody else that was doing it, so it was kind of a trial that we thought we’d try. And it worked. We got response,” Warner says.

Food for Fines ran as a late fall event from 2003 to 2006 before a second campaign was added each spring.

While the December effort always garners more donations than spring, both help the food bank restock its shelves at critical times. Angela Fretts-Waters, who oversees the LCSA Food Bank, says the fall campaign sets the food bank up for January and the start of the new semester. The April campaign gives the food bank staples for summer students and the September rush. The food bank served 146 hampers last year, the heaviest demand in its history. Students can pick up one hamper a month, and demand fluctuates through the course of the year.

“Without the Food for Fines program, I think we would really struggle to meet the needs of our students here on campus,” says Fretts-Waters.

This fall’s campaign will run from Nov. 25 through Dec. 18 and has a theme of SOS: Support Our Students by Stocking Our Shelves. Anyone can contribute, not just those with overdue fines. Over the years, the campaign has received donations from local service clubs, businesses and community members. Instructors are some of the campaign’s best supporters year after year.

Those who do owe fines can have up to $30 forgiven with a donation.

“We only charge 25 cents a day for an overdue book,” Warner says. “We cap fines at $15 a book. We know students don’t have the money to pay big fines.”

At the library, Warner sees the struggle many students have. “They’re trying to decide how much money they should put on their printing account because they’re going through their head that they need a bus pass and groceries. When you add up everything, it’s expensive for a student to go to school.”

Food for Fines is more than just a call for donations. Warner dreams up themes for each campaign, and decorates the donation bins accordingly. A wooden box normally used for book returns might be transformed into a school bus for a Stuff the Bus campaign, or a yellow taxi to help Drive out Hunger, or it might symbolize a boxing ring for a Battle against Hunger. She rarely recycles her themes.

Her passion is appreciated.

“Cindy is absolutely amazing,” Fretts-Waters says. “Her creativity with each of the campaigns gives me goosebumps. She puts her heart and soul into this program. She cares about the students so much and just wants to see the best for them.”

After nearly 22 years working at the college, Warner knows Food for Fines will be a special accomplishment.

“It’s one of the most important things I've done because I know that it's made an impact on students. It's really hard for students to be successful when they're hungry. So if there's even a few students that have been able to pass their final exams or get through the end of the semester with a full tummy, then I will have felt like I've done something.”

How can you help?

Donations to the LCSA Food Bank will be accepted at the Buchanan Library from Nov. 25 through Dec. 18. The library is centrally located near Centre Core and is open from: