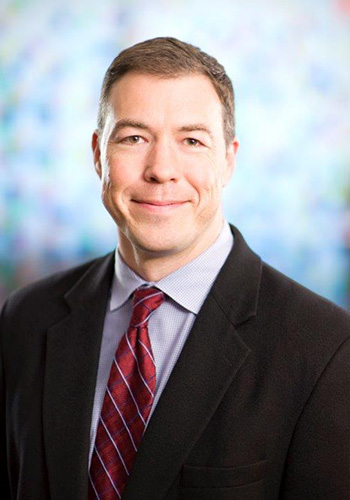 A 1988 graduate of the college’s Communication Arts-Broadcast Journalism program, Reeb has become one of the most successful media executives in Canada, recently being promoted to Executive Vice President, Broadcast Networks for Corus Entertainment. It’s the latest role in a storied career that began as a small town radio reporter and included stops as a parliamentary reporter in Ottawa and then later as the Global Television’s Washington Bureau Chief on his way to the executive leadership team at Corus/Global. Reeb is a devoted alumnus who has sponsored a one-of-a-kind internship for Digital Communications and Media students for the past 13 years.

“Troy has re-defined the definition of success when it comes to a Lethbridge College alumnus,” says Dr. Paula Burns, Lethbridge College President and CEO. “From his roots at Lethbridge College, he has skillfully climbed his way to the top of his industry. All the while, his commitment to southern Alberta and our college has only grown as a partner, philanthropist, industry resource and mentor to new generations of faculty and students.”

In his role with Corus, Reeb oversees Global Television and its 15 local stations, as well as 44 specialty television stations, 39 radio stations and all of Corus’ online platforms and apps. Under his leadership, Global News became the first Canadian network to ever win the Edward R. Murrow Award for Overall Excellence in journalism in 2013, and followed it up a year later with the award for Best Website, and two years after that with the first-ever Murrow Award for Innovation.

Reeb first offered his unique internship experience to a Lethbridge College student in 2006, and now each year, one deserving student spends time as a guest of his at Corus TV and radio stations in Toronto and Ottawa. He was named the college’s Distinguished Alumnus in 2003 and is a frequent visitor to campus, spending time with both students and faculty to discuss the state of the broadcasting industry and helping to guide potential career opportunities.

He will be the 19th person to receive an honorary degree from Lethbridge College since the award was first given in 1986. 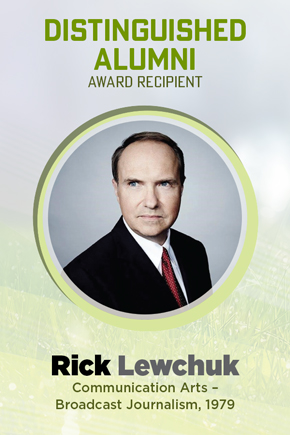 Rick Lewchuk is this year’s Lethbridge College Distinguished Alumnus. During a 40-year broadcasting career, Lewchuk has worked his way from local television in Lethbridge all the way to CNN in Atlanta. He is currently Senior Vice President, Creative Marketing and Brand Standards for CNN Worldwide, overseeing brand and marketing for all CNN Worldwide businesses including CNN, CNN International, CNN Español, HLN, CNN Go, CNN Airport and CNN Digital. His team has been recognized as the Global Marketing Team of the Year for four years running by PromaxBDA and with the Emmy for Outstanding Promotional Announcement in both 2016 and 2017.

Prior to joining CNN, Lewchuk was Senior Vice President at Bell Media in Toronto, where he led the team responsible for all aspects of marketing for two broadcast networks, 28 television stations and 34 cable networks, earning Global Marketing Team of the Year honours from PromaxBDA in 2013. In an earlier role at CTV and Bell Media as Senior Vice President of program planning and promotion, Lewchuk created original brands including The Comedy Network, CTV News Channel and Business News Network and launched Canadian versions of brands including MTV and E! His early-career television stops included CJOC-TV Lethbridge, CKCK-TV Regina and CTV Television Network in Toronto. He is a voting member of the Television Academy of Arts and Sciences, and an executive member and Board of Directors member of PromaxBDA. Lewchuk maintains ties to Lethbridge College’s Digital Communications and Media program as a way of supporting future broadcast professionals. 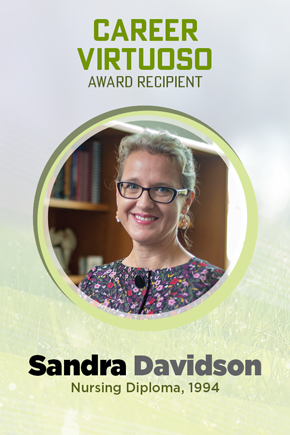 Dr. Sandra Davidson is this year’s Career Virtuoso award recipient. Dr. Davidson was appointed as the University of Calgary’s Dean of the Faculty of Nursing in August 2018, following a previous role as Associate Dean for Undergraduate Programs in the Faculty of Nursing at the University of Alberta. At the U of A, she oversaw the largest portfolio within the faculty and co-led a Curriculum Renewal Project that resulted in a renewed undergraduate curriculum. She has served in a variety of positions in the United States, including Dean of Nursing and then Senior Director of Academic Affairs for Carrington College in Phoenix, Ariz., and as Director, Master of Healthcare Innovation Program at Arizona State University.

Originally from Lethbridge, Dr. Davidson had considerable practical experience as a nurse before entering her academic career, and she has impressed colleagues with her entrepreneurial thought and creative innovation. Dr. Davidson has served as the Organizational Development and Clinical Education Specialist for Cancer Treatment Centers of America in Arizona, where she worked with a team to implement and evaluate an innovative adaptable care delivery model for the inpatient oncology unit. After graduating from Lethbridge College in 1994, she received her Bachelor of Nursing from the University of Lethbridge, and her Master of Science in Nursing and her PhD in Leadership Studies from Gonzaga University. 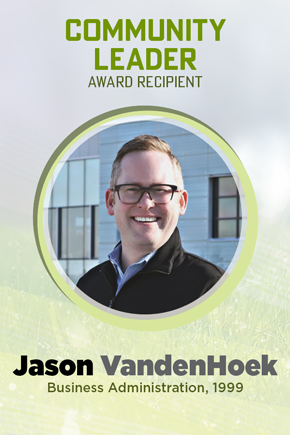 Jason VandenHoek is the recipient of this year’s Community Leader award. Currently the Executive Director of the Chinook Regional Hospital Foundation, VandenHoek thrives on community involvement and relationship building. An active member of southern Alberta’s development community for over 13 years, he demonstrates the importance of philanthropy by supporting a variety of initiatives through the Chinook Regional Hospital Foundation, Lethbridge College, the University of Lethbridge, the Southern Alberta Art Gallery, the City of Lethbridge, Association of Fundraising Professionals, Canadian Gift Planners Association and more.

After completing the Business Administration program at Lethbridge College, VandenHoek obtained his Bachelor of Management from the University of Lethbridge. VandenHoek served as a major gifts officer for the Galt Gardens Revitalization Project, working closely with the community. He then became a fund development coordinator for Chinook Regional Hospital Foundation, where he was responsible for fundraising and awareness initiatives. His ability to build relationships, execute events and manage annual giving campaigns led to his appointment as Executive Director in 2011.

VandenHoek’s community involvement began at Lethbridge College, where he was President of the Lethbridge College Students’ Association. His passion and desire to affect change in his community has also been recognized through the Chamber of Commerce’s Top Forty under 40 campaign. 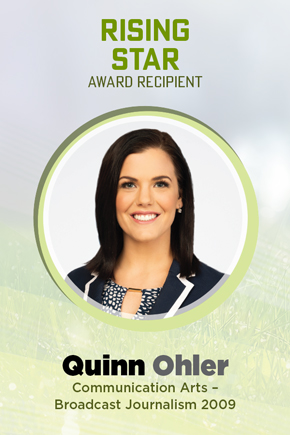 Quinn Ohler is this year’s Rising Star award recipient. She has been a reporter and news anchor at Global Edmonton since 2011 and currently anchors the weekend editions of the Global News Hour at 6 and Global News at 11. Prior to moving to Edmonton, she worked at Global Lethbridge, starting as a videographer, then as News Hour co-anchor and producer. She grew up on a farm just outside of Stavely, Alta., where she spent her free time helping out her parents. Her agriculture background and a love of politics eventually led her to the Communications Arts program at Lethbridge College. Her first broadcast job was in the promotions department at CJOC radio, before moving into the news department as a reporter and weekend anchor.

During her time at the college, Ohler was honoured as the recipient of the Troy Reeb Internship, earning the opportunity to visit and learn from the teams at Global Toronto and Global National. A Type 1 diabetic, she spends time working with various diabetes organizations in Edmonton and is also a board member for the Mental Rescue Organization, an Edmonton charity focused on raising funds and awareness for mental health.