A brand is more than visual elements – it is reflected in our communications. It is in our words. It is in our tone. And it is in the nuances of our everyday language. Our written identity supports the visual identity of our brand, portraying Lethbridge College as friendly and approachable, conversational and knowledgeable, community-focused and environment-oriented.

To maintain consistency in all written material coming from the college, we’ve provided a set of standards for typefaces and writing.

These typefaces can be used individually or in combination in both your printed and electronic materials, documents and templates.

Additional typefaces may be available to the Marketing and Web Services team for use on your promotional materials. 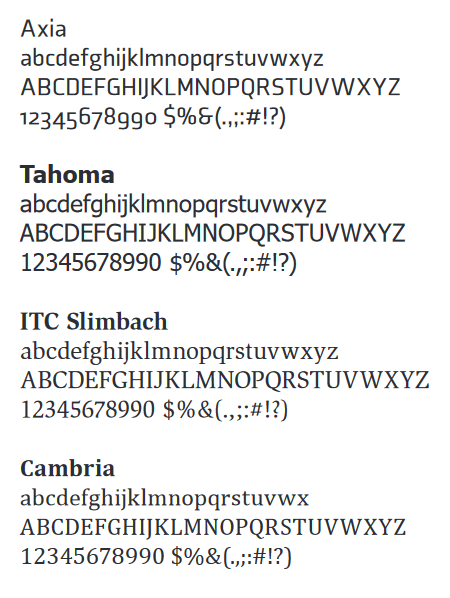 Our Communications office follows the guidelines outlined in the Canadian Press Stylebook or CP style. This section is designed as a guide for any member of campus who writes about the college to internal or external audiences. You will see answers to the most commonly asked questions about style and usage, including:

If you have a question that is not answered here, consult the Canadian Press Stylebook or contact the Communications team.

Some basic writing rules, courtesy of George Orwell, E.B. White and others:

(never ever The Lethbridge College).

Lowercase college when not accompanied by Lethbridge: the college; college employees.)

Uppercase when full title is used: Lethbridge College Board of Governors (but use board of governors when used generally).

Lowercase unless in address or formal reference

Use lowercase letters for directions, even when accompanied by the name of a province/country: north, south, east, west, southern Alberta, western Canada.

Few titles are capitalized, and only when they come before the person’s name. At Lethbridge College, capitalize President and Dean: President John Doe, Dean Jane Doe (but: John Doe, president and CEO; Jane Doe, dean of Health, Justice and Human Services.)

Use “from” and “to” when writing a range of times but use an en dash in tables.

In most cases, use the day of the week for an event if it is within seven days of publication and use the date otherwise. Avoid using both.

When writing dates use only the number. June 1 not June 1st.

Use per cent rather than %. (Two words and no hyphen.)

Spell out numbers greater than six digits: one million; 2.4 million.

Round off numbers where accuracy is not required: about 4,000 students; more than $5 million.

Avoid starting a sentence with a number; if you must, spell it out.

Plural abbreviations do not need an “s”: eight kg; 10 km.

Spell out acronyms and other initialized nouns on first reference wherever a reader might be unfamiliar with the term: Executive Leadership Team (ELT); Fetal Alcohol Syndrome Disorder (FASD); Aquaculture Centre of Excellence (ACE). You may then use the acronym on later references.

Note: nouns such as GPS and similar initialized terms are usually lowercase when spelled out: global positioning system.

Unless referring to a geographical location, most all-caps initials do not require periods: NAIT, GPA, U of L, (but: N.W.T., U.S.)

Do not abbreviate days of the week: Saturday.

Use of Indigenous is preferred to FNMI.

Use: Blood Tribe (Kainai), and Piikani Nation when referring to the official names of the two First Nations in our area.

Provinces can be abbreviated when a place name is included: Kelowna, B.C.

The Canadian Press standard for abbreviating Canadian provinces and territories is mixed upper and lowercase with periods after the name of the community: Alta., B.C., Man., N.L., N.W.T., N.S., Ont., P.E.I., Que., Sask.

Neither Yukon nor Nunavut is abbreviated.

Provincial designation is not required for locations in Alberta, or for major cities and provincial capitals: Leduc; Winnipeg; Vancouver (but: Prince Albert, Sask.)

After the wine auction, President John Doe wrote the entire Lethbridge College staff with praise for all those involved in the successful event. He concluded by noting that “clearly our community stakeholders recognize the significant contribution we make to the economic livelihood of southern Alberta.

“But more than that,” he added, “we create truly bright futures for our students.”

Omit the last comma before “and” in a list of three or more items, unless a comma is needed to prevent confusion.

Staff, students and alumni lined up to give blood.

However, sometimes the comma is necessary before the “and” for clarity, as is the case in this book dedication example (unless one’s parents ARE Mother Theresa and the Pope).

To my parents, Mother Theresa and the Pope.

To my parents, Mother Theresa, and the Pope.

For words of more than one syllable in which the “u” is not pronounced, Canadian authorities have adopted the “our” spelling as the standard. The following is a quick reference list for “our” words.

The following is a list of words and their accepted Canadian spelling.

There are a number of words that are misspelled or misused, or both, on a regular basis.

affect/effect
use affect to mean act upon, influence or imitate; use effect to mean cause, make possible, accomplish or complete

analyze/analyse
interchangeable but analyze is preferable

compliment/complement
the first is an expression of praise; the second is the quantity or number needed to make up a whole

composing/comprising
composing is to make or create by putting together (composed of A, B and C); comprising is consisting of (comprising A, B and C)

councillor/counsellor
a councillor is elected to city council; a counsellor offers advice

defence/defense
interchangeable but defence is preferable; use defensive

discreet/discrete
discreet means circumspect action or speech; discrete refers to something being distinct or separate

ensure/insure
ensure is to make certain; insure is to protect against loss

its/it’s
its is possessive (the dog licked its paws); it’s is a contraction of “it is”

license/licence
use license as a verb, licence as a noun

moral/morale
moral is a lesson; morale is an attitude or mental condition

practise/practice
use practise as a verb, practice as a noun

rational/rationale
rational is sensible; rationale is a statement of reason

re-sign/resign
re-sign is to sign again; resign is to quit

stationary/stationery
if you remain in on place, you are stationary; stationery is paper

that/which
use “that” when the clause is essential to the meaning of the sentence; use which, set off with commas, for clauses less essential to meaning

If the bulleted items are complete sentences, punctuate the sentence as normal.

Here are a few facts about Lethbridge College:

If the list items are not complete sentences, do not use capitals or closing punctuation.

Your application must include the following documents:

In a bulleted vertical list that completes a sentence begun in an introductory element and consists of phrases or sentences with internal punctuation, semicolons may be used between the items, and a period should follow the final item. Each item begins with a lowercase letter.

The president announced that:

In a bulleted vertical list where the items complete a sentence begun in an introductory element and the list consists of phrases or sentences without internal punctuation, no punctuation should be used after each list item. Each item begins with a lowercase letter.

The committee agreed to:

A variety of mobile apps to accompany Lethbridge College services and products are available for use on mobile devices. When directing users to download apps, always provide a direct link to the app page on the corresponding app store. Never direct a user to “search the app store” for an app. For example: Ellucian GO is available to download in the Apple App Store for iOS, and Google Play Store for Android.