Our ability to carry out diverse research has allowed us to specialize in aquaponics as an example of an integrated self-sustainable food production system, the culture of both warm- and cool-water fish, and other areas of research, including biofiltration, off-flavour and organoleptic studies.

If you have a challenge that you are looking to solve, we may be able to help. 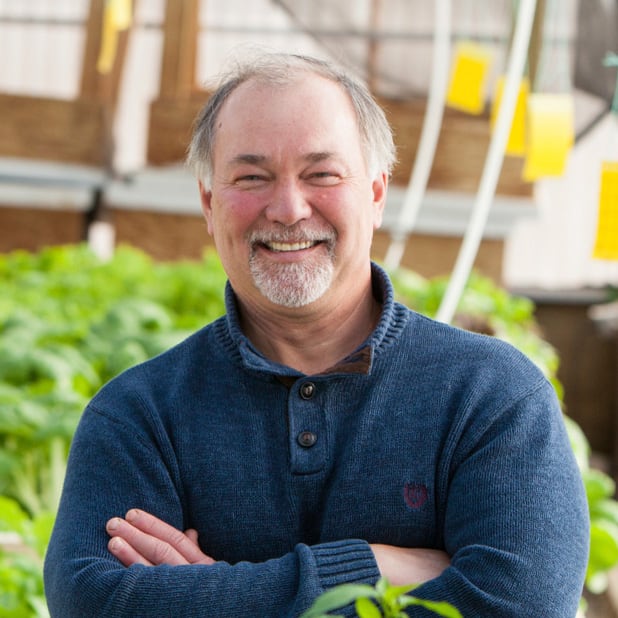 Dr. Nick Savidov is an internationally recognized expert in aquaponics. He has been involved in aquaponic research for 18 years. His contribution to the field includes development of solid waste processing in Recirculated Aquaculture Systems, which resulted in the first zero-waste, sustainable, food production system in the world. 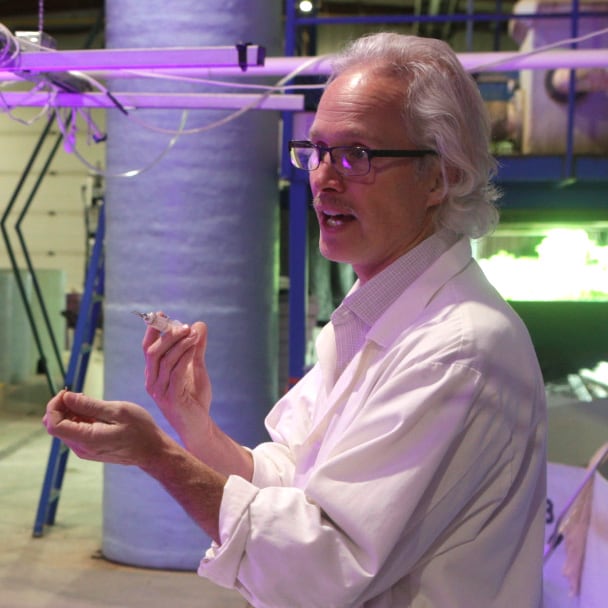 John’s expertise is centered around aquatic ecology and aquaculture. He obtained his degrees in Fisheries and Fish Pathology from the University of Guelph. John has been teaching at Lethbridge College since 1997. 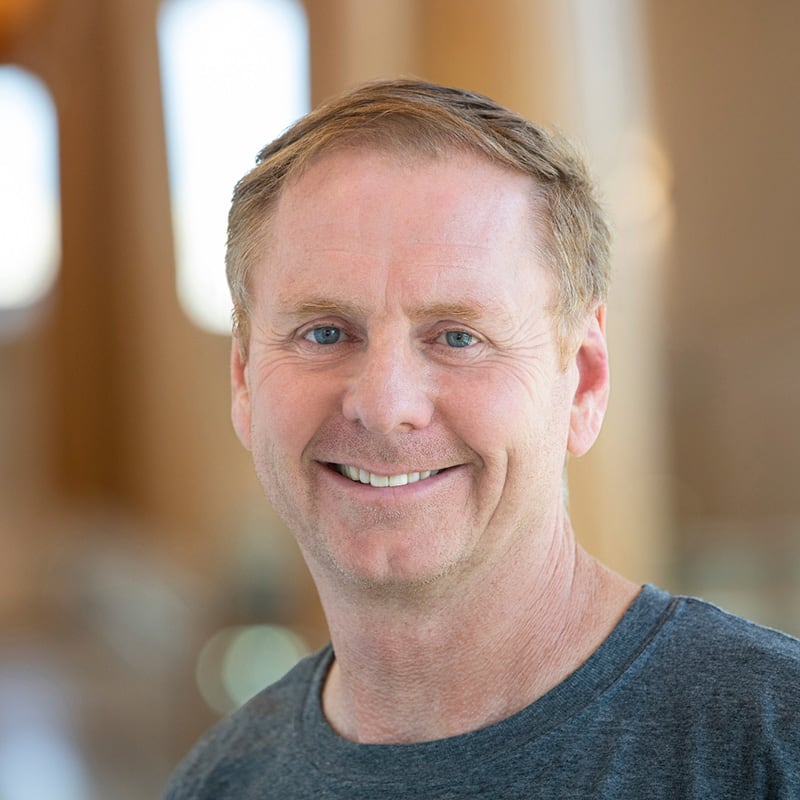 From obtaining a Renewable Resource Management diploma to running his own trout hatchery, Clay joined Lethbridge College in 1997. Clay has a broad and deep understanding and experience with raising a vast variety of fish species and has the mechanical savvy to construct, repair and maintain any number of aquaculture related systems and associated operations. 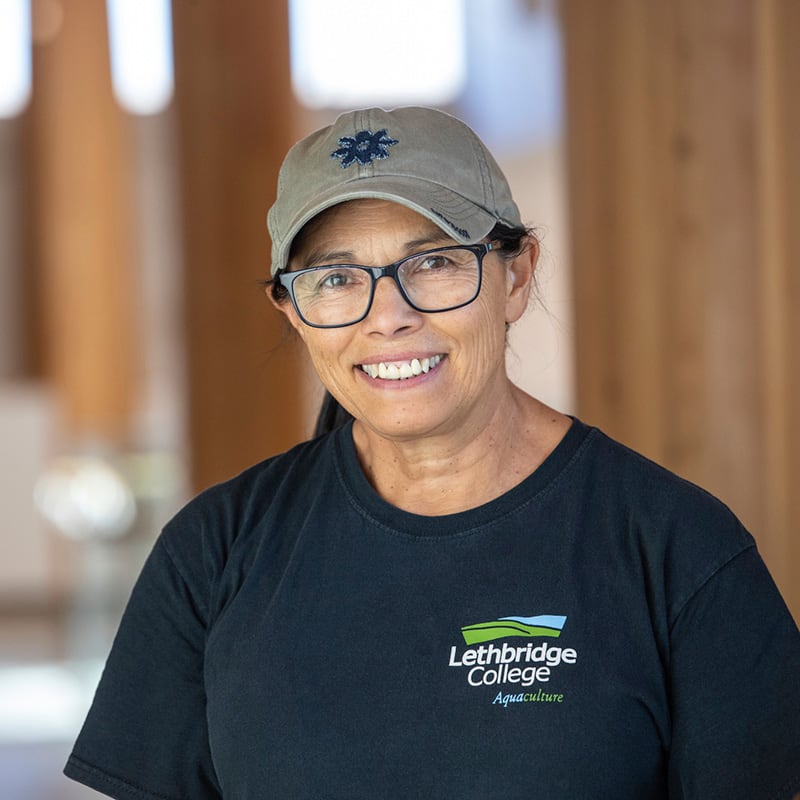 Penny has a Renewable Resource Management diploma and came on full time at ACE in 2008. She has developed skills in seeding, transplanting, harvesting and preparing plants for sales or research trials in an aquaponic greenhouse setting. Penny trains and coordinates our student labour force and volunteers.

An experienced analytical technician with a broad knowledge of water chemistry and plant tissue analysis and responsible for analytical equipment, developing SOPs, and training students.

A recent LC grad that has a diverse set of skills including greenhouse crop production, fish rearing, data collection and analysis. Daria has extended knowledge of various analytical methods and analytical equipment.

Working with a private producer the commercialization and marketing of an organic and biologically safe plant fertilizer made entirely from fish effluent from aquaculture operations. This is a project with Granary Road, Calgary AB.

Since 2009, Henderson Lakes water quality and plankton profile has been monitored to gauge the effectiveness and impact of lake management changes and decisions. Lake conditions continue to improve, and positive change has been realized through continued monitoring and assessment of lake conditions between April and September each year. This is an ongoing project in concert with the City of Lethbridge.

Today, sturgeon populations in the South Saskatchewan River are designated as endangered by the Committee on the Status of Endangered Wildlife in Canada. They are currently being considered for listing under the Species at Risk Act and are listed as Threatened under the Alberta Wildlife Act. Sturgeon management and recovery plans have identified herpes viruses as a threat to conservation efforts, but the risk is difficult to assess given the lack of information on the types of viruses and their presence in wild populations. It’s that gap that the team from ACE is hoping to fill this summer by catching sturgeon, collecting tissue samples from their fins and sending them to Fisheries and Oceans Canada for testing.

A privately funded one to two-year contract to establish and improve on existing practices of culturing walleye in recirculating aquaculture systems for the food market such that it can become economically viable. If successful, this project could result in a commercial walleye rearing facility being established in Alberta. Company – Western Walleye Inc.

Zignar Technologies and the Aquaculture Centre of Excellence (ACE) (part of the Integrated Agriculture Technology Centre of Lethbridge College) are currently working together to develop a monitoring system for industry, educational, and research applications for water quality.

As part of the agreement, ACE will purchase the equipment and materials with joint funding from Grande Prairie Regional Innovation Network (GPRIN); Zignar Technologies will provide an in kind contribution of 200 hours of software development and engineering services to design, implement, and test a versatile, and cost-effective water quality monitoring system for industry, educational, and research applications.

The biological, chemical (pesticides) and nutrient monitoring of a number of Lethbridge stormwater discharges to the Oldman River were studied between 2012 to 2014. This was a joint project between Oldman Watershed Council, City of Lethbridge, Agriculture Canada and Lethbridge College.

Numerous wildfish species were cleaned of parasites and disease, migrated to a domestic diet in preparation for introduction into the public display aquaria at the Bow Habitat Station in Calgary, AB. Quarantine facilities were also utilized for secure holding of fish from other countries prior to disease clearance and release to respective culture facilities (i.e. barramundi, trout, salmon).

High quality bamboo biochar source was identified, and the material received in December 2017. Forty-one aquaponics modules have been designed and constructed as planned. The units were modified during the course of the experiments to make them more robust and easier to manage. The experiments on testing flow rates and varying thickness biochar microfiltration units were conducted as planned. The rate of 3.3 µL cm-1 sec-1 and 8 cm thick biochar were optimal for maximum capture of micro- and nano-particles. Beckman Coulter LS Laser Diffraction Particle Analyzer was used to collect data on particles spectrum analysis. Data on nutrient composition of aquaponic water demonstrated that biochar had to be conditioned in order to remove excess of alkalinity in order to make it appropriate for aquaponic plant production.

Pilot-scale biochar filter based on 8’ tank was designed and constructed in April 2018. The filter was modified using “sandwich” design to improve oxygen supply with three layers of biochar with 17 ppm DO level in the filtrate. The filter resulted in a dramatic decrease of TSS from 20 ppm to below 5 ppm. Experiments with 16 vertical production towers supplied with aquaponics water were conducted and demonstrated the effect that biochar considerably decreased accumulation of organic sludge in the tower pockets leading to 10% higher yields.

The results of the project were disseminated to NSERC and CASBE agencies and the industry partner on April 26, 2018. NSERC/CASBE biochar workshop including student presentations was held on August 22, 2018. The workshop was attended by the industry, faculty, staff and students of the college and University of Lethbridge. Two TV interviews were given to capture wider audience including CTV and Global TV interviews broadcasted locally and nationally.

The project resulted in faster commercialization of the technology. Two pilot-scale biochar filters were built and tested by the commercial companies Deep Water Aquaponics and Current Prairie Fisherman Corp, which lead to the shipment of 28 tons of bamboo biochar to Alberta by Pure Life Global. The material was shipped from China through Sungro Bioresource & Bioenergy Technologies Corporation, Edmonton, AB, in September 2018. Pure Life Global developed marketing materials based on the results of the project. More shipments are expected based on the market demand. There were enquiries by other companies involved in greenhouse and fish production in Alberta and BC in regard to utilization of biochar as a filtration and growing medium.

Sustainable food production is more accessible than ever in Lethbridge, as aquaponics grows in popularity. The expert scientists in Lethbridge College’s Aquaculture Centre of Excellence (ACE) have launched a new series of courses that will provide training in the area to everyone from high school students to interested amateurs to experienced greenhouse technicians. 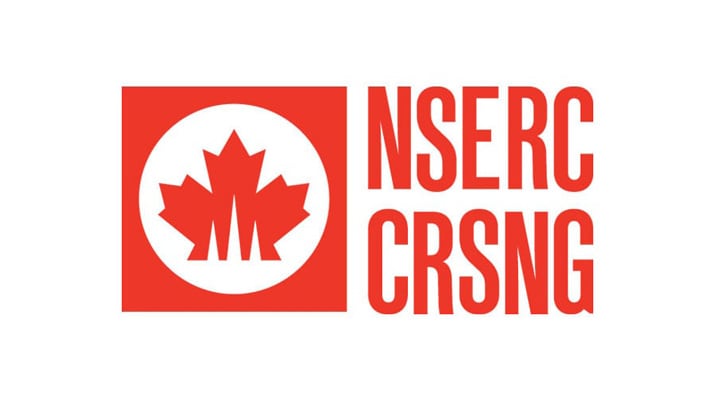 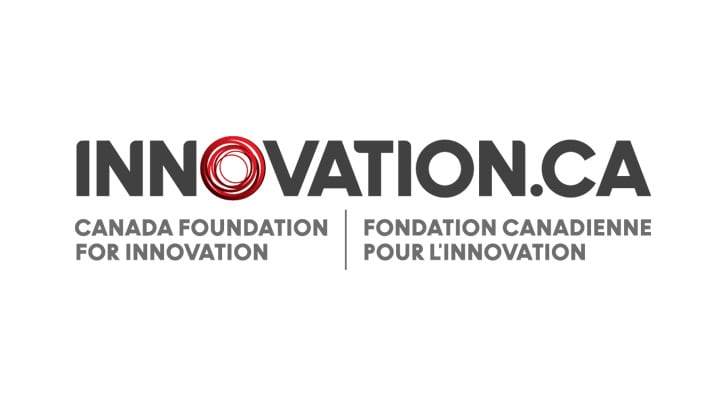 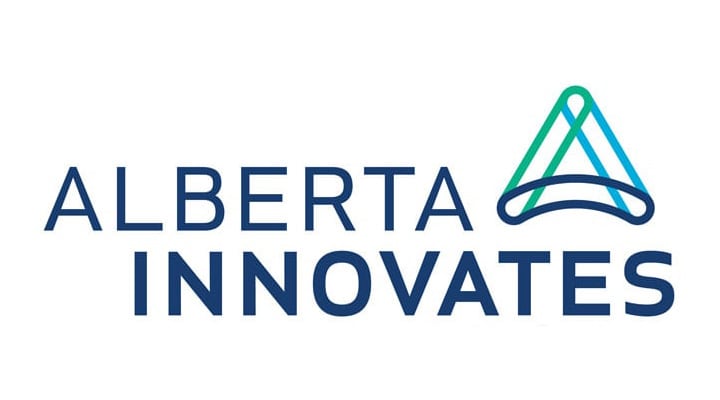 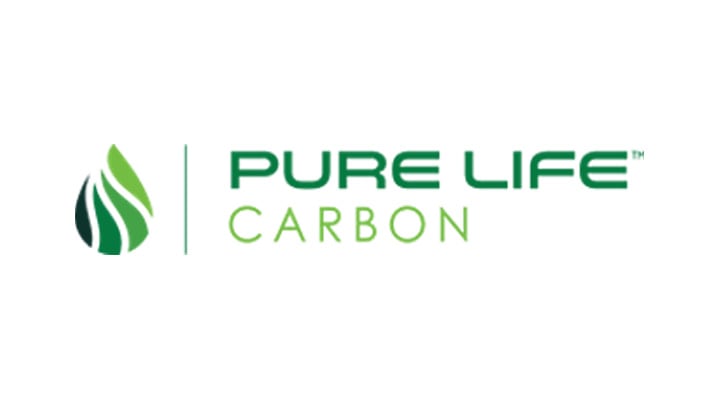 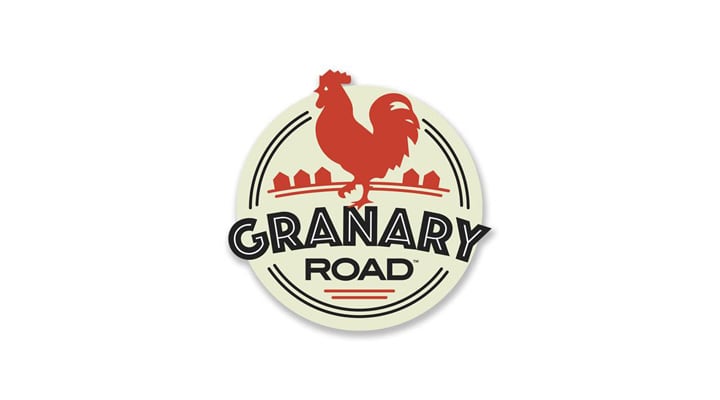 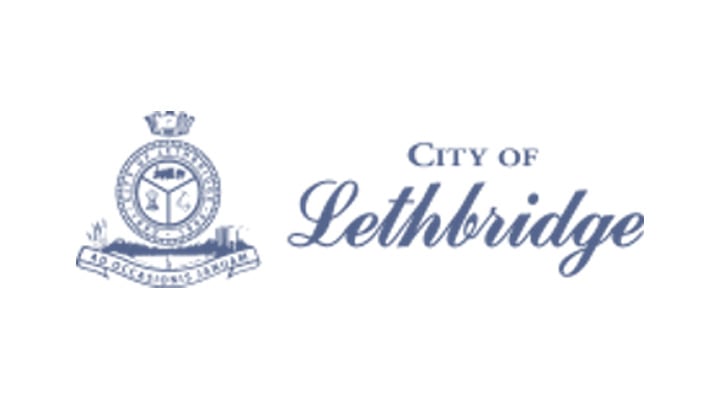 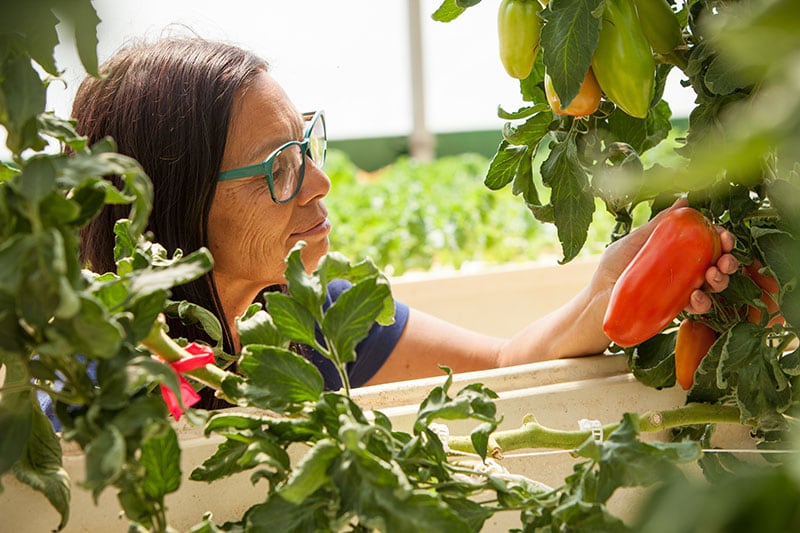 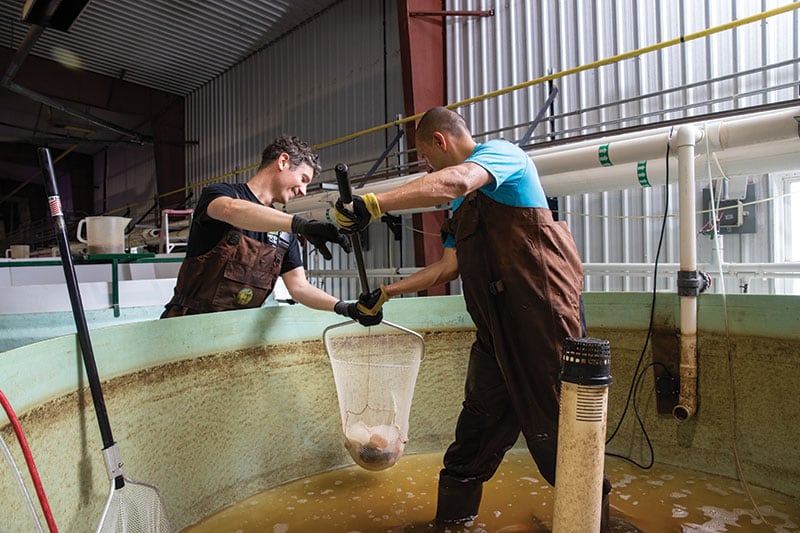 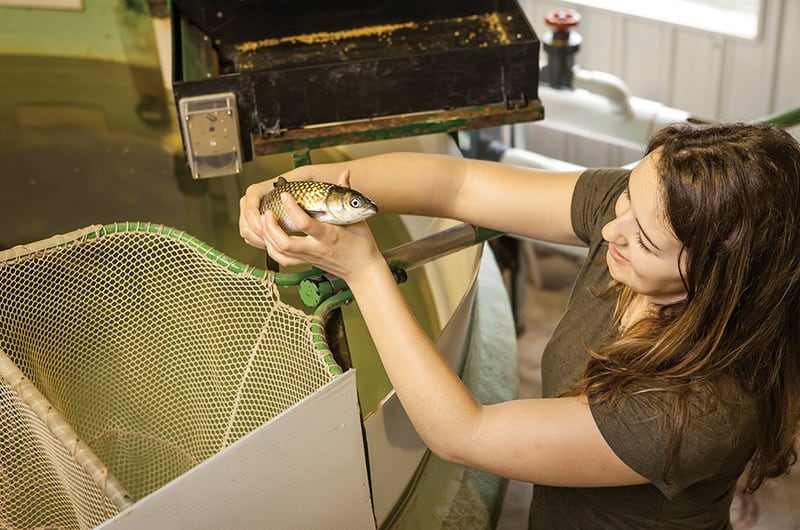 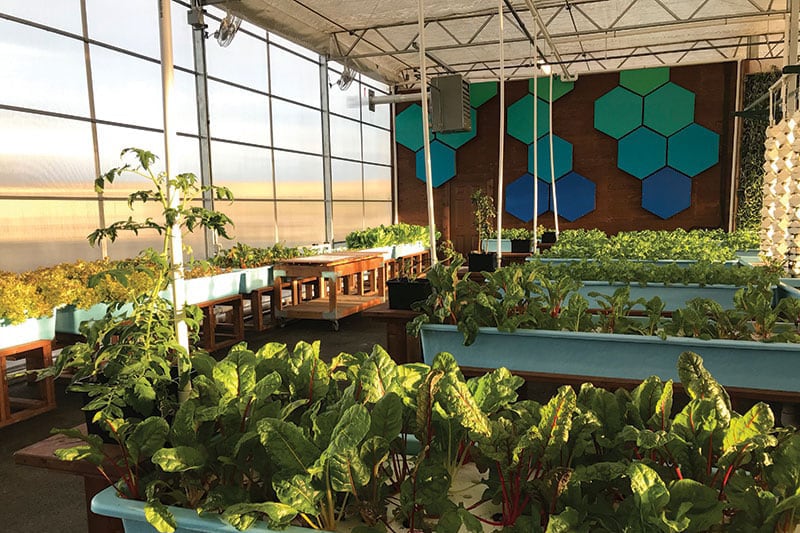