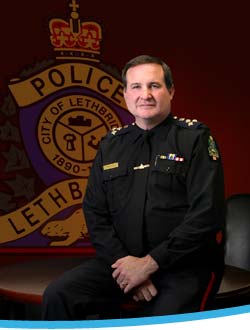 Tom McKenzie, chief of the Lethbridge Regional Police Service, was nominated by his former wrestling coach at Lethbridge College; Shaun Ward is now an alderman for the City of Lethbridge.

McKenzie, a 1976 grad of the college’s criminal justice program, who worked his way to the top job for which he was chosen after a Canada-wide search, was honoured at the Distinguished Alumni Dinner in March.

McKenzie says he’s “humbled” to be recognized along with other previous recipients whose many achievements speak well for them and the College.

“I have always been proud of my time at the college, both as a student and later as an instructor,” says McKenzie. “It brought about personal growth and challenges that have certainly helped me as I have moved through my career.”

McKenzie started with the Lethbridge force straight from college. He was appointed police chief Jan 1, 2007, after almost 31 years with the service. During his career, he worked in many capacities, including stints with economic crimes, major crimes, drugs and intelligence. He served three years as commander of the service’s criminal investigation division.

He has taught in the Criminal Justice program at Lethbridge College, and is an instructor for Athabasca University, delivering the White-Collar Crimes and Investigation Course.

He has been involved with Community Problem Solving, Cultural Awareness, and was the Executive Director of the Southern Alberta Restorative Justice Institute. He has served on the Lethbridge Domestic Violence Action Team, Aboriginal Council of Lethbridge, Sexual Violence Action Committee and the Community Substance Abuse Reduction Team.

McKenzie has been active in his community as a minor hockey coach, followed by involvement with his daughters in dance competitions and festivals. He has served 18 years with the London Road Neighbourhood Association, is treasurer for McMan Youth Services, and is involved with the Coaldale Group Conferencing Committee.