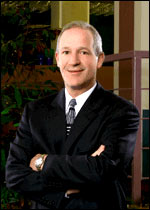 Rod Pocza, President of Mirant Canada Energy Marketing Ltd., believes learning never ends, and Lethbridge Community College (LCC) provided a solid base from which to build an extremely successful business career. Graduating in 1975 with a diploma in Business Administration. While he has since moved up through the ranks of energy sector businesses, he credits LCC with providing a realistic introduction as to what he could expect in the business world.

"LCC gives a nice balance and representation of the work you will face," he said. His experience at LCC means a great deal to Pocza, but as many people discover "it meant a lot more once I was out than when I was in." He explained that sometimes students donít fully appreciate what a college program is providing and question the need to learn some particular skill. "You never believe some of that stuff will ever be useful." It was after graduating and applying the learned skills externally that the full benefits of the LCCexperience hit home. As an example, Pocza said he didnít appreciate accounting when he was a student. He was interested in marketing and taking accounting was just like having to take math. Later, when his career required him to be able to read and understand balance sheets, he saw the wisdom in the college approach.

Pocza did not have the specifics for his future career planned out when he first came to LCC, but he definitely had a direction in mind. "I knew I wanted to get into some kind of marketing. I did have my sights on the energy industry eventually." With marketing in mind, Pocza graduated and took a position in sporting goods with the former Woodwardís store when it first opened in Lethbridge. It was a marketing position with a lot of sales involved and it was running a sporting goods department, which seemed a fit with his love of sport. But it was only a stepping-stone to his future. "I spent a couple of years there and saw it wasnít enough of a challenge," he said. So he began sending out resumes to companies in the energy sector, knowing "that goal would have to take me out of the city." His job search paid off when he was hired by Amoco Canada and moved to Calgary. Again, he found his college background paying off as Amoco, like his program at LCC, insisted on providing a wide range of experiences in different fields.

Pocza said he ended up gaining experience in finance, materials purchasing, human resources, accounting and field work. "It was very much like going to LCC, only the ëclassesí were longer." Thinking back to when he attended LCC, Pocza remembers both the academic and social side of life as a student. He recalls spending a lot of time with Buster Burke, an instructor who recently retired from LCC. "He was a big part of my college career." Socially, "there used to be some great card games" and fun events at The Barn. There was also an opportunity for some intramural sports fun with his friends. "We were the big floor hockey team," Pocza said, adding the games could feature a lot of "rough and tumble" action with people being knocked into the bleachers. Staff and students would fill the old gym to watch the games.

Lethbridge Community College played a big part in his family life as well. Pocza is one of four siblings and he, his two brothers and one sister all graduated from LCC. His experience at LCC was so positive, Pocza wouldnít hesitate to recommend it to anyone. "It was like coming together with a bunch of friends and the instructors treated you that way." Even if someone is uncertain about what they want to do in the future, Pocza would urge them to go to LCC. Heís confident that once at the college they can find a direction for life, whether it be furthering their education or building a career. "Depending on your aspirations, whether they are grand or not, it will give you the opportunity to succeed."