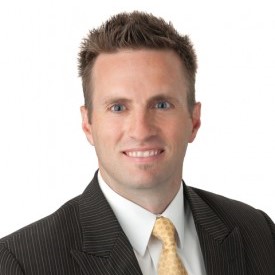 Johnson joined Lethbridge-based Huckvale LLP as an associate in 2007 and was named a partner in 2014. He specializes in commercial, residential and agricultural real estate, as well as corporate and commercial transactions. He is a member of a number of professional organizations, including the Law Society of Alberta, the Canadian Bar Association and the Lethbridge Bar Association, where he previously served as a board member. He is also a member of the Lethbridge/Macleod Real Estate Practitioners Advisory Group.

Outside of work, Johnson has volunteered his time with a variety of groups, including Lethbridge Legal Guidance and Lethbridge Public Legal Education, where he has served as a sessional guest lecturer at both Lethbridge College and Lethbridge Public Library. He has also served on the board of directors for Magrath Minor Hockey, Magrath Men’s Hockey and the Boys and Girls Club of Lethbridge. Johnson enjoys spending time with his five children, and he participates in a variety of sports including snowboarding, hockey, golf, squash and softball.